Share All sharing options for: Leadership, Marketing, and UT Basketball...

...a few years ago, I was lucky enough to be selected to attend the 2006 Student Leadership Conference, held at the LBJ School of Public Affairs.  The conference is run by Dr. Howard Prince, who is perhaps the best American I've ever met.  After retiring from the Army as a Brigadier General, Dr. Prince has dedicated a large portion of his life to developing and teaching ethical leadership to the current generation of students.

As part of the conference, all students were required to read a leadership book before arriving.  For the life of me, I cant remember the name of the book, but I've never forgotten its core message.  The book talked about the potential downfalls of seeking to become more well-rounded.  In focusing on improving a weakness, a leader can wind up inadvertently diminishing their greatest strengths.  By neglecting the further development of traits that made them successful in the first place, a leader can wind up losing more than they gain by working on their weaknesses. The book advised that--in some cases--leaders should try to make their strengths even stronger instead of watering down their strengths to solidify a perceived weakness.  The book advised seeking other ways to address these perceived weaknesses or finding ways to minimize their overall effect.

After the jump, I explain why I think this principle perfectly applies to the current marketing of the UT Men's Basketball team.  By inextricably connecting the Men's and Women's teams together, I believe the overall effect is creating the exact situation the book cautioned against.

As always, before we dive into the substantive nature of this post, here are some recent basketball articles and columns dug up by DimeCoverage.  Some of these are a few weeks old, but I think they're still interesting.

1) Horns Ranked #3: In one preseason poll, Texas is only behind KU and Michigan State.  In case you haven't been paying attention, we play both of those teams.  In Austin.  This season.  The article (from TexasSports) highlights the premier opponents on this year's schedule, which includes playing three teams in the top-five:

2) GREAT Avery Bradley article: I highly, highly, highly recommend this piece.  Gary Parrish outlines the path of how Avery Bradley came to nest on the Forty Acres.  In an anecdote I've never heard before, he explains how Chris Ogden stumbletrucked his way into securing Bradley's commitment, after reading a blurb about him on the internet and later finding out that Bradley loved UT.  Sometimes, it really IS better to be lucky than good.

I'm on record as saying that I'm more excited about Avery Bradley than any UT Recruit--in any sport--during my seven years on campus.  In case any of you were wondering how Rick Barnes feels about him, the article shows exactly why this partnership is going to be a perfect fit.

Bradley is a strong candidate to establish himself as the Big 12 Defensive Player of the Year and more. Honest to God, the guy just loves to guard. He takes pride in it, thinks about it, yearns for it. And to stress this point, Barnes told a story from July 2008, when Bradley was playing in a summer event that did not allow teams to pressure full court.

"Avery was so mad," Barnes said. "He would just stand right at the half-court line and wait for the guy, and some of those people having to bring the ball up the court were like, 'Oh, boy.' I mean, he's just tenacious. How many guys in high school want to go down and guard somebody 94 feet from the basket?"

"Avery is the total package," Barnes said. "Whatever it is, he's got it."

3) Chip Brown Article (Via GatorBait): In an excellent article, Chip Brown updates the progress over perhaps the primary concern facing this team--chemistry.  Chip also runs down the roster and provides updates over individual players, summer workout developments, and ruminates over lineup combos.  How can you read this article and NOT salivate over this upcoming season?

4) UNC Fans Ruminating Over Barnes: It's always interesting to see how outsiders view your program.  In a great find by Dime, here are some board posts from some UNC fans discussing the Texas Program and recruiting efforts.  They really, really dont respect Rick Barnes.  This is no surprise to those who attended the Greensboro Regional last year...

Last season, I analyzed and critiqued the fledgling "UT Varsity Rewards" program.  In a nutshell, the system provided double points for attending women's games and included a list of boring prizes for incredible feats on fanhood.  The system ultimately reminded me of the Chuck-E-Cheese prize booths where it took 10,000 tickets to get a Nerf Gun.  For example, I missed two men's games last year and my prize was...Crocs. 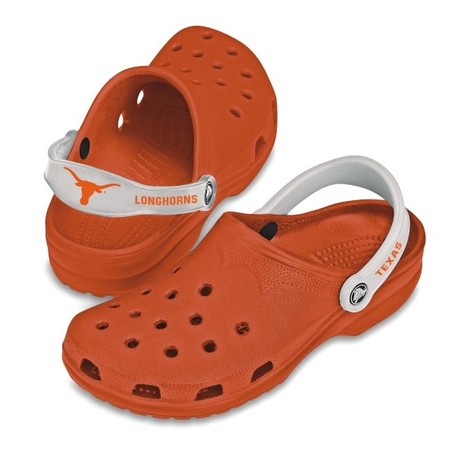 Wait, you dont want your prize?  We've gotten that a lot, actually...

Recently, Texassports.com unveiled the revamped version of the Varsity Rewards program.  While the prizes still haven't been listed, some critical information over the program is up on the website.  Here are some of the key bullet points, which I've trimmed down for editing purposes:

1) Stamp Cards are best left to sandwich shops on the Drag, not for a basketball rewards program.

2) I'm most troubled by one aspect of the system.  It appears that students wont get a Rewards Card until they've gotten five stamps on a Stamp Card.  HOWEVER, point totals dont start accumulating until students start using their Reward Card.  To me, this appears to mean that students will have to attend six games before they accumulate a single point, which is patently ridiculous.

3) Last season, students were also allowed to scan their cards before the game, but this changed later in the season.  For the last six or seven games of the season, cards were only able to be scanned AFTER the game, which created gigantic lines and caused many people (including me) to just blow it off entirely.  Why, you might ask, was this change made?  It may SHOCK some of you to hear this, but it appears that some students were gaming the system by "showing up" to women's games--especially the "premium games"--scanning their cards and then leaving immediately thereafter.  That's just going to be the reality with this system, and I really hope they dont make the same switch during the middle of this season.

4) While the prizes arent listed, the accompanying picture shows that it will probably be more of the same--t-shirts, sweatbands, and....Crocs. 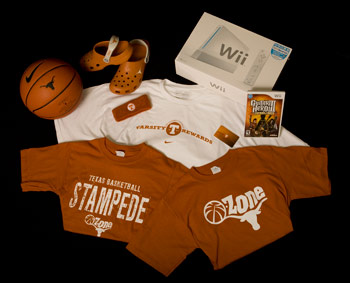 Tenacious D!  I downloaded their songs on Napster back in the day!

5) Finally, and this is most important, this year's system has equalized the point distributions from attending men's and women's basketball games.  This is a welcome change, but, in my opinion, it still misses the larger point that the two teams shouldnt be interconnected.

Tying this back to the introduction of this post, I can't help but feel like the attempts to link these two programs are preventing an overall strength (men's basketball attendance) from becoming an even greater strength by focusing efforts on propping up something seen as a weakness (women's basketball attendance).  I dont mean for this to sound callous, but I cannot envision any scenario in which women's basketball sets the entire campus on fire.  I think it's wonderful that fans--including some BON posters--are wildly supportive of women's basketball, but the sport (on a collegiate and professional level) just doesnt gain much traction around most fans and fanbases.

The potential of the men's program lacks similar restraints.  Kevin Durant proved that the team can capture the imagination and attention of the entire campus when he caused students to line up from the Erwin Center to MLK to I-35 in trying to get tickets for the A&M game.  With the Hyperized roster, killer home schedule, and returning superstars, this is the perfect opportunity for UT Athletics to build a loyal student fanbase for Men's Basketball.  The hardest thing is getting students in the door for early-season games, and a well-orchestrated Rewards Program--coupled with the Stampede system--could likely bring in many fresh faces to the Erwin Center, in addition to appeasing the existing fanbase.

As of now, I dont think the system is taking full advantage of this opportunity.  The most likely result is that any prizes even remotely enticing will involve having to attend double digit games for both men's AND women's basketball.  Simply attending 8-10 games of men's basketball will probably get someone a sweatband, which isnt going to make them want to go out of their way to attend a few extra games.  Plus, if I'm reading the stamp card provision correctly, it will take attending at least six games before students get a single point.

Ultimately, I'll reserve judgment on the entirety of the changes until the full system is announced, but I really, really, really hope the joint marketing efforts dont extend outside of this rewards program.  I think it negates allowing a strength to become stronger on the pretense of trying to firm up a perceived weakness.