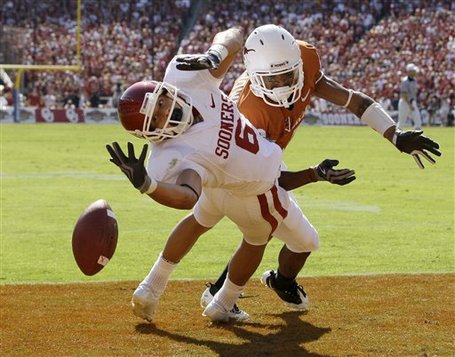 The closers. UT's defense has become the team's stalwarts.

"We all talk about 60 minutes," defensive tackle Lamarr Houston said. "Not 30, not 45, but 60 minutes. And we can get way better. We can get more mental toughness, we can get a lot stronger. There's no satisfaction on our defense."

Defensively, the Longhorns have allowed just 17 points in the fourth quarters. Amazingly they've given up only seven points in the closing period in five games since the opener. They have finished strong for a variety of reasons.

Muschamp and secondary coach Duane Akina are on the same page, having coached together for a season and a half. Continuity has been a stabilizing force.

Receiver shuffle. The Horns are looking for winning combos.

Brown and offensive coordinator Greg Davis said the goal is to give McCoy better protection. That's why the Longhorns may rely more on a three-receiver, one tight-end formation to provide an additional blocker for McCoy and the running game.

Plus, Brown has juggled the lineup at receiver to vary McCoy's options in the passing game, and at guard, to help with protection issues.

As of Monday, receiver Jordan Shipley will start along with sophomore Malcolm Williams and freshman Marquise Goodwin, who scored Texas' only touchdown against the Sooners.

Brown said Goodwin earned the job with his play against OU. He said Williams represents not only a speedy vertical threat, but also is a receiver who can block.

Nothing is easy this season.

Faced with intense pressure and an inventive mix of coverages from the Sooners' defense, McCoy slogged through one of the worst statistical performances of his career. He completed only 21 of 39 passes for 127 yards, threw one interception and had at least two more misfires that could have been picked off and returned for touchdowns if OU linebacker Keenan Clayton would have caught balls thrown into his hands.

With less than four minutes left in the first half, UT's offensive production was almost nonexistent. At that time, McCoy was 7-of-16 for 30 yards, UT only had 47 yards of total offense overall, and even the guys on the field were getting restless. Center Chris Hall admitted "it was a struggle,"

The BCS title game could get messy.

But if a Texas-SEC champion pairing does not play out, which history has taught it probably will not, then the chaos that has become inherent to the B.C.S. will ensue.

“It could get messy,” said Jerry Palm, an independent B.C.S. analyst and the publisher of collegebcs.com.

Palm said that there were no significant surprises in the first release of the B.C.S. standings. He said that the two teams with the best shot outside of this year’s Big Three — No. 1 Florida, No. 2 Alabama and No. 3 Texas — are No. 6 Iowa as long as it stays undefeated and one-loss Southern California, which is No. 7. Palm said that because of No. 4 Boise State’s weak schedule, it would take an “Armageddon” situation to move it into the top two. (We have seen that before, as two-loss Louisiana State won the national title at the end of the 2007 season against one-loss Ohio State.)

A little more on Texas-OU.

Bevo is one contented animal.

The Tigers are sure they can contain Colt McCoy.

Considering Texas quarterback Colt McCoy is completing 70 percent of his passes, Mizzou defensive coordinator Dave Steckel took only a second to compute the margin for error against him.

Missouri coaches have finally fessed up. They do not have a tight end.

Missouri’s coaches admitted Monday what other Big 12 Conference coaches have maintained for years.

The Tigers — other than a designation on a depth chart — have no tight end.

“The great thing about our offense is we can put any receiver at any position we want,” Mizzou coach Gary Pinkel said Monday. 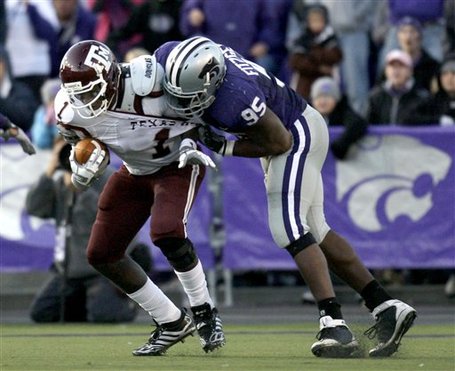 So that's the plan this season. The Aggies have given Tech every reason to be confident about the game this Saturday.

"We certainly did our best to give Texas Tech an opportunity to be overconfident," coach Mike Sherman said Monday. "That part of the plan has worked."

Well, that was about all that worked for the Aggies in a mind-numbingly dreary, 62-14 loss to the underdog Wildcats, who a week earlier had been whacked 66-14 by Tech — A&M's foe Saturday night in Lubbock.

There is good news and bad news.

Gundy said he expects Hunter to play at some point this season, yet offered no timetable, considering him "day to day" with an ankle/foot injury. Hunter has practiced several times during the past two weeks and has been medically cleared to play.

"He has to feel like he can go out there and perform," Gundy said. "That’s really what it comes down to.

"Whenever Kendall says, ‘I feel good, I feel comfortable playing,’ we’ll get him in and playing some."

Now, if there’s more to this case than just Dez lying to the NCAA, then all bets are off. If Dez ran afoul of rules by mingling with Deion Sanders’ agent and/or reaping some bounty, then mercy can’t help Dez, and Deion should be branded a leper in the collegiate sports world.

But if Dez’s crime is that a scared kid lied to powerful people who held his future in their hands, his almost-month-long sentence is plenty.

NCAA documents seem to show that Dez three times misled NCAA investigators. Three lies, three games. Seems fair to me, especially considering those three games effectively ended what could have been a Heisman campaign, considering all the candidates who have fallen off track.

OSU receivers have picked up the slack.

That’s exactly what has happened with OSU scoring 37.5 points per game and ranking No. 8 nationally in scoring offense.

The big surprise is how the Cowboys have earned the ranking. With Bryant missing three games after being ruled ineligible for violating NCAA rules, other receivers have emerged as playmakers for the Cowboys.

Quarterback Zac Robinson said, "If you would have told me at the beginning of the season these are the guys who were going to be out there, I would have said you were crazy."

Without Bryant, OSU has been forced to become more balanced and use different weapons.

Bob Stoops talks about what Barry Switzer meant to the Oklahoma program. Ask anyone around Austin and we'll give you a different take on Barry.

Sam Bradford has another big decision to make.

Bradford has two options if he wants to squash those negative vibes: work to get back on the field this season and risk injuring the shoulder a third time. Or, he can have surgery and return to Norman for his senior season.

Otherwise, Bradford will enter next April’s draft with a heap of question marks that general managers can’t answer.

Left guard Brian Simmons will be out several weeks.

Bo Pelini does not care for your criticism. Cornhusker fans have verbalized their displeasure with the season.

After Monday's practice, Pelini said he doesn't care about what the fans say or if they boo him and his team.

He said when the fans and media earn the title of head coach, they can make the decisions. Until then, he said he and his staff are calling the shots.

There could be a downside if Pelini switches quarterbacks mid-season.

Though your first-choice quarterback may be in a rut, change involves extreme risk because of the team nature of football. Especially in cases when the talent level of the quarterbacks appears to be similar.

Bill Snyder has no idea how his team beat the Aggies 62-14.

Count Bill Snyder amongst the Kansas State faithful still searching for an exact answer behind the Wildcats' inexplicable 62-14 rout of Texas A&M Saturday.

"It probably tells us that we're a little bit goofy and we have no idea where we are," said the K-State coach during Monday's Big 12 teleconference.

It has been a tough year for Big 12 quarterbacks. Tech has now lost two to injury.

Aside from the consistently ridiculous stats, Mike Leach's offense has always been a quarterback's best friend in another way: Coming into the season, no QB in a Leach offense had ever missed a start due to injury, at Texas Tech or in his stints as offensive coordinator at Oklahoma and Kentucky in the late nineties. Suddenly, he's had two starting quarterbacks knocked out in less than a month, according to the Lubbock Avalanche-Journal.

The Big 12 is predictable.

The six football programs in the Big 12 North Division are giving us exactly what we anticipated at the beginning of the season.

In this case, predictable is more fun.

The North teams are a collection of also-rans in comparison to the top of the heap in the South. They are a group of teams that might need tiebreakers and every week of the regular season to decide who gets to go to Dallas and likely lose the conference championship game in early December.

I have no help on that whatsoever. Nobody gives me any suggestions or writes anything. It’s whatever I feel. I try to do three things on it – I try to make it interesting, I try to make it funny, I also try to make sure there’s a message in there somewhere.

Assistant coaches are cleaning up in the salary game.

Perhaps recalling how ex-assistant Gene Chizik took a job in 2006 to become head coach at Iowa State, Brown says, "What we do at Texas, we're competing with head coaches across the country. Instead of [assistants] taking a risky head-coaching job, we're paying 'em to stay here.

"We're also competing with the NFL for our assistant coaches."

Maybe there is a plan behind our cupcake non-conference schedule?

Check out the BCS standings. Florida and Texas are ranked No. 1 and 3 respectively, despite playing weak non-conference teams. Both know if they win out, they’ll play for the title anyway.

This isn’t scheduling cowardice, it’s, in fact, what passes for BCS intelligence.

If you’re a big-name program, it’s foolish to prove yourself outside of the mandated league games. A monster showdown might be fun to play in, but it isn’t proportionately rewarded by either the voters or the computers. All it does is open you up to a loss, an injury or an emotional letdown.