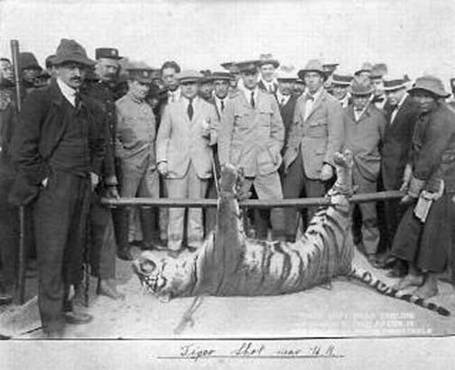 We went tiger hunting and came back with a big one. 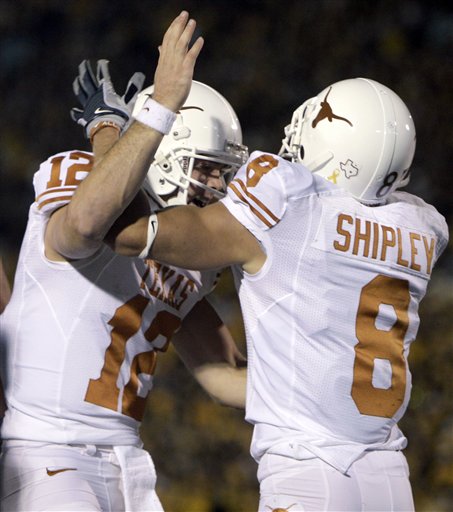 Sorry if we disappoint anyone, but the Horns aren't going to lose.

Sorry to ruin the ending, but Texas isn't going to lose. Not in the regular reason. Not after watching Saturday's 41-7 demolition of Missouri.

Don't go message boarding Gators and Tide honks. We're making the case as far as Pasadena and dropping it off there. After that it's up to one of you. Maybe. For now, pencil in Texas at 12-0. Really, 13-0 after it blasts whatever pathetic opponent the Big 12 North produces in the conference championship game.

Looking ahead? You bet. The hardest part of the Horns' season is over. Their biggest hurdles are cleared. Like Alabama and Florida, they control their own destiny toward landing in the Rose Bowl for the BCS title game.

The Horns came out strong in the first quarter and never let up. (Box score.)

And what the UT coach did to prepare for Saturday's game against Missouri obviously worked. The third-ranked Longhorns, with three new starters, began strong, maintained their intensity and cruised to a 41-7 victory to spoil the Tigers' homecoming in front of a sellout crowd of 71,004 at Faurot Field.

Texas is now a perfect 12-0 under Brown in the game immediately following the Sooners.

"We thought it was important that this week, we came in with a little swagger," Brown said.

Will Muschamp used the corner blitz as an early greeting for Blaine Gabbert.

Defensive back Deon Beasley got an open lane to Missouri quarterback Blaine Gabbert on the Tigers' first series, getting the sack. Gabbert, who had been nursing a sore ankle for two weeks, was limping noticeably after the play but remained in the game.

Muschamp had used Aaron Williams successfully on a corner blitz against Oklahoma. Williams recorded a sack, sending Sooners' quarterback Sam Bradford to the sideline after he reinjured his right shoulder. 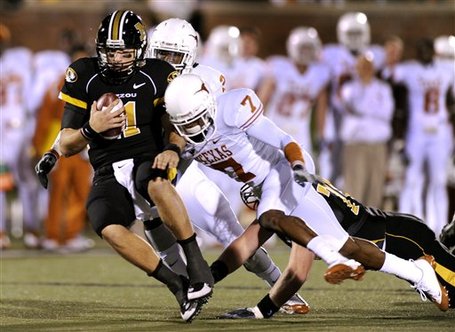 Did you know the Horns have a Goon Squad?

They call themselves "The Goon Squad," as only a bunch of crazy defensive football players can.

It began with Lamarr Houston and spread to the rest of the defense.

Kind of like how a tackle begins with one person on the Texas defense and ends up with five people on the opponent.

"It means that we're just a bunch of blue-collar guys who don't care about anything else but playing football," Houston said.

So the Texas defense officially has a nickname.

Maybe we are the best team in the country?

Ah, I hear the SEC fans now. They play much better defense in the SEC, Golden. There's no way that Texas could do to a good SEC team what they just did to Missouri.

I reply to that SEC sentiment by asking: How well would these offenses fare against a Texas defense that's holding opponents to 0.8 yards per carry over the last five contests, a defense that has forced 21 turnovers, just six less than the 2005 national champion Longhorns forced in seven more games?

Some of those annoying, season-long, ongoing questions are answered.

Will there be an OU hangover?

Scoring three touchdowns on your first three drives equals no hangover. This game didn't seem to ever be in doubt and that's because the Longhorns came out ready to play.

This probably wasn't the homecoming Missouri wanted. (One photo sums it up for Tiger fans.)

But as the onslaught continued in last night’s 41-7 homecoming drubbing by No. 3 Texas, it became abundantly clear that Missouri’s season is just about to get interesting. The Tigers are 0-3 in Big 12 play for the first time since 2002 and now trudge into their far less grueling stretch with a big bold question mark hovering over the quarterback situation.

On a primetime, nationally televised stage, McCoy delivered his most dominant performance of this season. The senior quarterback played the starring role of homecoming spoiler, completing 26 of 31 throws for 269 yards and three touchdowns in the Longhorns’ 41-7 victory over Missouri on Faurot Field.

"It’s amazing what not being sick will do for you," McCoy said. "I felt great out there tonight. The weather was awesome. I want to thank God. It’s been awesome."

Blaine Gabbert did not want to come out of the game.

"He was real upset that we took him out," said Coach Gary Pinkel, who called the decision to pull Gabbert precautionary. "As the third quarter went, we got that turnover and we could have been in position to score to get back in the game a little bit, then we would have played him, but it was also my call — and I said that at halftime — that if it was a point where we were out of the game, then I thought it was wise to get him out."

The Tigers may have lost some fan trust.

This column’s preconceived game plan was this: Despite a loss to Texas, the real defining stretch for a young Missouri football team is straight ahead against its Big 12 North peers.

But the game plan had to change, because when a team tanks it as bad as Missouri tanked it in a 41-7 loss to Texas last night, it doesn’t get off the hook that easily. The Tigers were physically overmatched, yes, but also ill-prepared and mentally elsewhere.

By the third quarter, most of the sold-out crowd was physically elsewhere. I’m not sure I’ve ever seen Memorial Stadium as empty during a game as it was in the fourth quarter.

Just a note to Missouri fans... It can always be worse. Just ask UTEP.

We like to keep people guessing. There's one big mess in the Big 12. And the North is really bad.

Other than undefeated Texas, not one Big 12 team will be ranked among the top 10 in this week’s Associated Press poll. And only two other teams (Oklahoma State and Oklahoma) will be in the top 25.

That’s hardly what you’d expect from one of the premier leagues in the country. Then again, it’s not as if anyone could’ve seen this coming.

The BCS Guru says the top three will stay the same, but there will be a shakeup in the next few places.

Instead, it's a weekend of what it might have been.

Throw in another Sparty, No! moment, what we are left with is simply status quo at the top of the BCS Standings.

Florida, Alabama and Texas will remain in the top three spots - in that order - in Sunday's BCS Standings. However, some shuffling will be in order for the next five slots.

Does the BCS make you want to scream? Horn Brain breaks down data from the first week with bears. 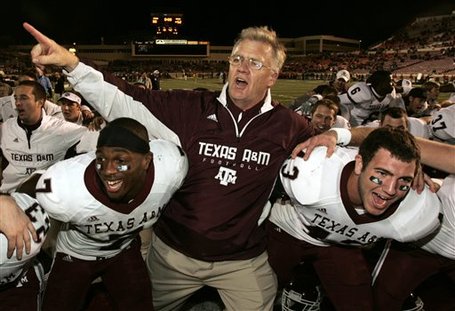 The Aggies won! The universe is not rational.