Share All sharing options for: Anatomy of Success: First Drive Against Missouri

Throughout the entire season, the Texas offense has struggled to get off to quick, early starts. Against Missouri, in a nationally-televised homecoming game in front of the biggest crowd at Faurot Field in 25 years, getting off to a quick start was even more important than usual. In addition, the Longhorns are in the process of re-tooling the offense, or at the least, re-adjusting priorities and personnel.

After losing the coin toss, Missouri elected to defer to the second half and kicked off the ball to Texas to start the game. DJ Monroe returned the kick 30 yards to the Texas 39, putting his head down and picking up difficult yardage at the end of the game -- Monroe is far from the biggest guy on the field, but he's willing to do the dirty work for extra yards. Love that toughness and effort from him.

As expected, Texas opens up in 11 personnel with EBS on the right side of the line to provide help for Kyle Hix, though Jordan Shipley and Marquise Goodwin are reversed from their positions on the depth chart -- Shipley is in the slot and Goodwin is the flanker. Malcolm Williams starts at split end: 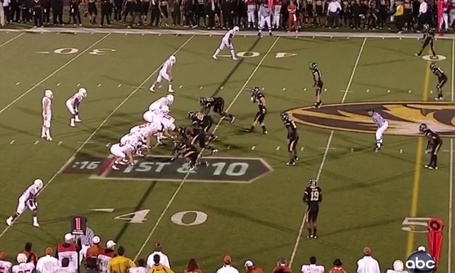 Notice that defensively, Missouri is giving the Longhorns big cushions on wide side of the field and Shipley draws coverage from a linebacker. 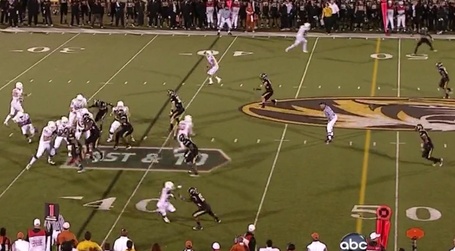 The Longhorns start out the game with a play-action fake to the short side of the field. All three linebackers bite on the play action, with Shipley's man caught taking a bad step towards the line of scrimmage, leaving McCoy's roommate plenty of room to catch the short pass. McCoy delivers the ball and Shipley turns upfield, breaking a tackle and finding the open field before tripping on the turf for a 31-yard gain on the first Texas play from scrimmage.

Texas stays in 11 personnel, with Smith once again on the right side of the line. Notice that Missouri remains in soft coverage with the cornerbacks providing huge cushions for the Longhorn receivers: 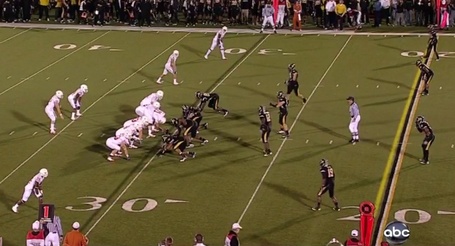 Texas runs the zone play to the right, but Fozzy Whittaker, always aware of the cut-back lane, finds it and manages to get past the backside defender on the play: 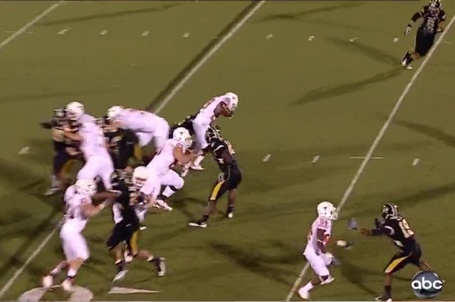 The defender brings him down from behind, but the combination of vision by Whittaker and his understanding of the scheme allows him to pick up six yards without the offensive line having to execute at a high level.

The status quo established on the first two plays remains -- Texas is in 11 personnel with EBS on the right side and Missouri has two safeties deep and the cornerbacks well off the Longhorn receivers: 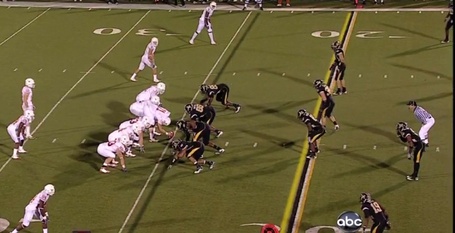 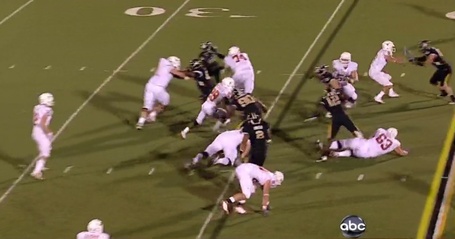 Ah yes, this looks like the Texas offensive line -- notice that EBS misses his block, Hix attempts to cut his defender, missing, Huey attempts to cut Weatherspoon, missing, and, just for good measure, Charlie Tanner whiffs in space, as usual. Somehow, despite four blocks that fail in varying degrees, Whittaker picks up two yards on the play, setting up third and short. 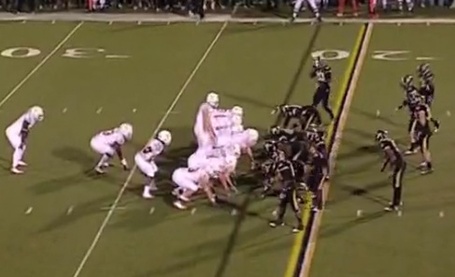 Given the overwhelming tendencies of the Texas offense, which runs behind the right side of the line with the Jumbo package nearly every time, Missouri probably expects the ball to go right, which it does. Houston gets a nice block and Hix and Huey get some drive, but this play is mostly made by Johnson, who is rarely stopped in these situations. Guess who wins this little battle shown above? That's right, the irresistible force, the bludgeon known as Cody Johnson, wins over the quite-movable Missouri defender and picks up the necessary two yards with an extra foot or two thrown in for good measure.

Johnson stays in the game, but otherwise the same 11 personnel package from earlier returns, with the only adjustment being Malcolm Williams at flanker instead of Goodwin, who moves to the split end position. Notice how far off the Missouri cornerback is playing Malcolm Williams -- around eight yards: 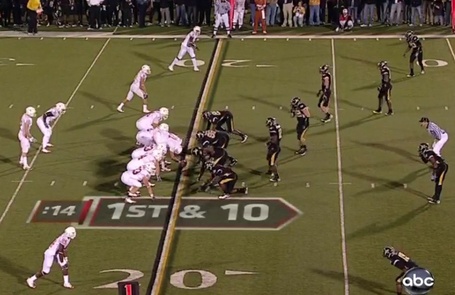 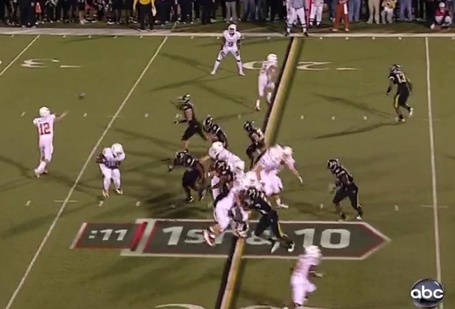 McCoy runs a play-action fake to Johnson as two linebackers come on a blitz, leaving Shipley free to make the block on the cornerback for Williams, who catches the short pass and picks up an easy seven yards before fumbling the ball out of bounds on the hit.

Same personnel as the previous play, with Johnson lined up to the left of McCoy. Once again Missouri is in soft coverage, but appears to have brought a nickel back on the field: 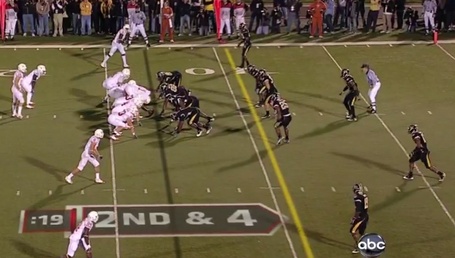 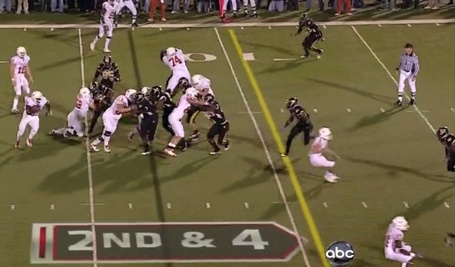 It's a simple zone play right, but the offensive line does an excellent job of making their blocks, particularly EBS, who sets the edge for Johnson by getting to the second level and sealing the safety. Johnson has a huge expanse of open field to the outside and uses his speed to take the edge before using his power to punish Missouri defenders and pick up yards after contact. All told, Johnson breaks four tackles on his way to a seven-yard gain.

Texas brings in DJ Monroe to run the Monroe series in 11 personnel with Fozzy at running back, Williams and Shipley to the top of the formation, and Greg Smith on the right side of the line once again: 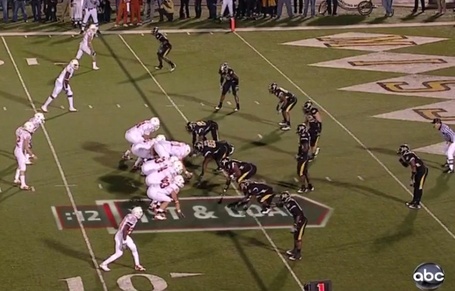 Monroe comes into motion, drawing the attention of the safety coming on the run blitz, who attacks up the field and takes himself out of the play. It's not the jet sweep, but rather the quarterback counter: 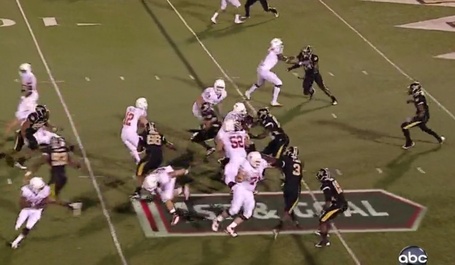 The play sets up well, as pulling tackle Hix only has to block the playside linebacker. That's Hix there on the left of the line of scrimmage, looking at the aforementioned linebacker he just whiffed on. Instead of a successful play and a possible touchdown, McCoy loses two yards.

Texas goes back to their base 11 personnel grouping, with EBS on the right side of the line of scrimmage and Fozzy in the backfield with McCoy. Notice that Missouri now has all three linebackers in the box, with Shipley matched up against a safety lined up seven yards deep: 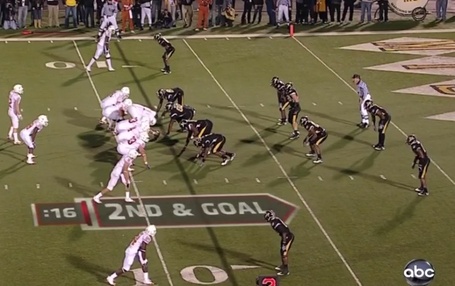 In looking at the picture above, it's not hard to imagine that this play will be a success -- Missouri seems to have no desire to adequately defend Shipley on this play. The roommate heads out into the flat as the Missouri defender takes several steps back in coverage, leaving Shipley wide open:

As a result, Goodwin is able to block both his own man and the safety "assigned" to Shipley, leading to an easy walk into the end zone and the first score of the game.

Eight plays for 61 yards, 3:35 expired. Three of three passing for 46 yards and a touchdown for McCoy, as well as one carry for a loss of two yards. Two catches for 38 yards and one of the easiest touchdowns Shipley has ever scored. One catch for seven yards and a fumble by Malcolm Williams. Two carries for eight yards by Fozzy Whittaker and two carries for nine yards by Cody Johnson. Two missed blocks by Kyle Hix, as well virtually the entire line on the second running play. Several other good efforts by the offensive line, though, particularly on the run of seven yards by Johnson, which included a strong effort by EBS

In terms of establishing momentum, taking the crowd out of the game, and punching Missouri in the mouth early, this drive was a complete and total success. In fact, given the circumstances and the previous slow starts by the offense, this drive was exactly what the Longhorns needed.

Honestly though, Missouri provided extremely little resistance defensively, particularly with the decision of Dave Steckel to play such soft coverage and give Shipley so much room to operate one week after Oklahoma shut him down by man-handling him at the line of scrimmage. No idea what the Tiger defensive coordinator was thinking.

The running looked solid, with Smith providing a big help to Hix and Huey on the right side of the line. Despite Scipio Tex deriding the running back personality cult that exists among Texas fans, Whittaker does provide more than Vondrell McGee, particularly with his ability to see and anticipate the cut-back lane opening up, something McGee struggles with mightily. Johnson, for his part, now looks as quick as he ever has at Texas and is running with pure, unbridled anger -- it's a vicous, but beautiful thing to behold.

Even without having run the football yet, the first play demonstrated that the emphasis and talk about the running game the last week or so caught the attention of Missouri players, as the play-action fake made sure the outside was wide open for Shipley to catch and run. Malcolm Williams looked fast and strong on his catch, though he needs to work hard on ball security this week -- that could have been a reason, along with the obvious problem with dropping the football, that has kept him off the field. Goodwin did not have a catch on the drive, but did an excellent job blocking downfield, as he did the entire evening. More, please.

All in all, an excellent start to the game and a indication of things to come, as the Longhorns reeled off 21 points before the Tigers really knew what hit them and by that point, with the strong play of the Texas defense, the game was effectively over before it had really even begun. On a night that featured huge struggles by Florida and Alabama, particularly offensively, the Longhorns showed conclusively that they absolutely deserve mention with those two teams as the best in the country.