The State of Oklahoma: So How Good is That OSU Defense?

Share All sharing options for: The State of Oklahoma: So How Good is That OSU Defense?

After our game against Missouri on Saturday, I've been vacillating between "Oklahoma State is much better than the national media is giving them credit for" and "Oklahoma State is just a good team that has no impressive wins over anyone of note." What is it? After going through their games against Texas A&M, Missouri, and Baylor the last few weeks, I'm still not entirely sure. The Aggies got waxed by K-State of all teams and then turned around and ran over Texas Tech in Lubbock. Gabbert's bum ankle sabotaged Mizzou. The Baylor game was just boring because, well, the Bears aren't any good, and it was difficult to get much out of that. Before that, the Pokes beat a Georgia team that turned out to be very flawed and dropped to a Houston team that shockingly got whipped by UTEP. The toughest stretch of OSU's season begins this Saturday, while ours will end.

It is worth noting that if not for an incredibly lucky tipped ball for a Houston touchdown, Oklahoma State is undefeated and somewhere in the Top Ten mess between #4 and #10. If I had to take a wild guess, they would be behind the Hawkeyes at #5 in the BCS, and the hype for this game would be multiplied tenfold. Of course, that would not be entirely fair to Houston, who shredded Okie State's defense and made the plays to win. Again, what are they? Top ten team disguised in Grandma's clothes or superficially scary team? 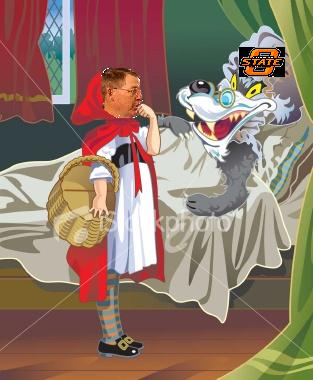 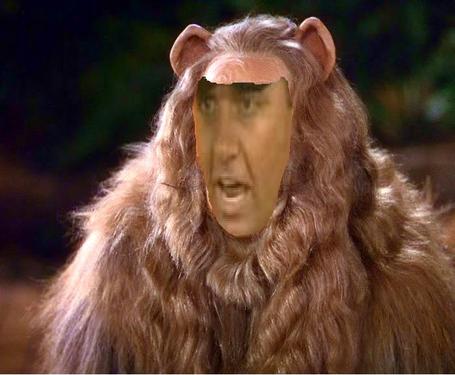 Either way, the OSU game is a big one for Texas, but it is an interesting question nonetheless. With that in mind, I want to discuss what we can expect to see this weekend, and I'll start with their defense. I'll focus primarily on the Missouri game, a big night game for the Pokes and arguably against the best offense they've seen this year except Houston's.

When I quickly reviewed the Mizzou-OSU game last week, I gave Oklahoma State a little too much credit holding down the Tiger offense. Don't get me wrong, they deserve their props, but when I had the chance to actually watch the game carefully, it became abundantly clear that Missouri left a mountain of opportunities on the field on offense. Blaine Gabbert, suffering from that bad ankle, mixed great throws with very inaccurate ones, and he missed many an open receiver. The receivers themselves didn't help with some devastating dropped balls, and key penalties and bad special teams gave a huge field position advantage to the Pokes. Also, I felt the playcalling was a bit bizarre at times for Mizzou, who often went to an empty set on short yardage situations with a gimpy QB and also called rollouts and even zone-reads.

The thing is, most of these mistakes were unforced, as Oklahoma State, at least until the second half, dealt minimal pressure with either their base 3 or 4 man rush or even with blitzes. When Gabbert misfired early, it had little to nothing to do with pressure and everything to do with his ankle. I'll enumerate some key mistakes, all of which were in the first half:

-On Missouri's first drive, the Tigers drive to the goalline, but Gabbert lets a ball sail on an open receiver and then a curious QB keeper call goes nowhere (did the Mizzou coaches know the guy can't run with that ankle?) The Tigers settled for a field goal.

-Second drive: The Tigers grabbed some good field position after a 40 yard throw off playaction. Unfortunately, a loss on a run and a false start made it second and 19, but a 15 yard run made it 3rd and 4 shortly after. Gabbert, with no pressure, threw two horribly overthrown balls on third and fourth down to give the ball back to the Pokes.

-Fourth drive: Gabbert underthrew Alexander on a long ball when he had the linebacker Sexton on him (in other words, that could have gone for a large chunk of yards). The underthrow allowed Sexton to grab Alexander's arm before the ball got there, and while he was called for pass interference, the net gain would have been much more than 15 yards had it been a good throw. The drive would end with another overthrown pass from Gabbert with no meaningful pressure, which led to a punt.

-Fifth drive: Gabbert rocketed a pass that was slightly too far ahead, but still catchable, to Jackson. The ball bounced off his hands into Lucian Antoine's, who promptly returned it for a touchdown. Oops. This cost Missouri the early lead.

-Seventh drive: Due to a muffed snap, the Tigers faced a 3rd and 21 deep in their own territory. Gabbert stepped up in the pocket to avoid the rushers and heaved a great throw to Kemp who was looking at a gigantic gain... and he dropped it. The resulting punt set up OSU with great field position and they scored to close the half.

In the second half, despite improved play from the OSU defense (particularly tackling), it was much of the same. An underthrown ball allowed Perrish Cox to get an interception (still an impressive pick, but should have been thrown farther or higher for Danario to leap for), and a disputable holding call cost the Tigers an 88 yard kickoff return. The Tigers had a few more drives into OSU territory that failed due to curious playcalling and more drops and bad throws. It makes it worse when you consider that OSU scored only nine points in the second half despite excellent field position.

The reason I'm listing all this is to show that Missouri hurt themselves more than Oklahoma State hurt them. Bill Young, afraid of the quick passing game from Missouri, stayed in a soft zone coverage most of the night with minimal blitzing. The problem was that they could not generate pressure, but fortunately for them, Gimpy Gabbert could not throw the ball consistently. When the Tigers weren't killing themselves, they moved the ball well, rolling up over 300 yards of total offense in the first half that would have been 400 if not for that huge dropped pass from Kemp.

What Bill Young Will Do

With that in mind, can we expect much of the same from Bill Young's defense? In many ways, yes: As Peter has said before, the proper way to defend our offense is to play a soft shell coverage that pursues and tackles well and dares us to run. Missouri went a little overboard on that which got them killed by Colt, but I would expect something along those lines this Saturday. For example: 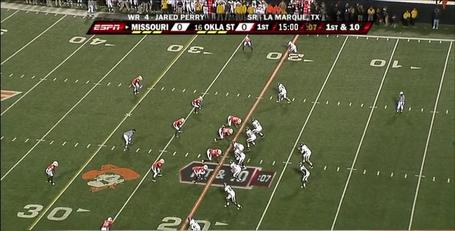 Oklahoma State looked like this much of the game. This was the first play from scrimmage and OSU decided they would try to keep everything in front of them and also send only 3-5 rushers per play. This defensive decision allowed Missouri to run fairly well throughout the contest. 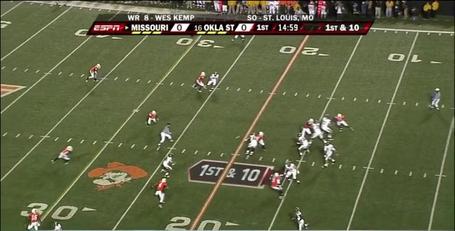 This is how the play ended. No pressure and an easy throw for a six yard gain.

What should be most troubling to OSU is their lack of pressure; neither their D-line nor their blitzes put consistent pressure on Gabbert, although it improved some in the second half. This left OSU vulnerable to big plays, and some poor tackling and pursuit by their secondary allowed some good YAC to Missouri's recievers. Here is Danario Alexander's long touchdown catch and run after Missouri's pick-6. 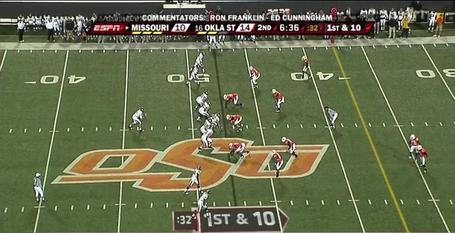 The Cowboys have three down lineman while the Tigers are empty. The Pokes are once again showing zone. 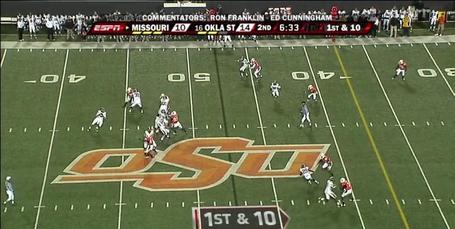 One blitzer is sent, linebacker Donald Booker, but the four man rush gets nowhere near Gabbert. 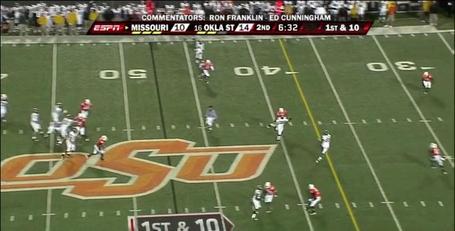 Alexander runs across the middle while safety Victor Johnson, the bottom right player in orange, lets him go to follow the Mizzou player entering his zone. Unfortunately, his teammate decided to follow him too, and a good throw by Gabbert (still a little high) gets the ball to Alexander. 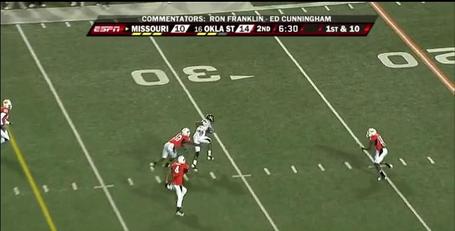 A poor attempt at a tackle by Thomas springs Alexander free, and a poor angle and missed tackle by Perrish Cox allows him to score.

Oklahoma State's defense is not atrocious and will be among the better ones we have faced so far this season. However, their starting defensive ends, Jeremiah Price and Ugo Chinasa, haven't had the season their fans were hoping for, and their D-line as a whole is not nearly as scary as Oklahoma's. They have some athletic linebackers who can make some plays despite the loss of Orie Lemon, but their secondary is not that great. On the whole, this is a defensive unit not nearly as strong as OU's.

Bill Young is a guy that loves to bring the heat, but I think our own quick passing game will make him more cautious, similar to what we saw against Missouri. The key will be the ability to generate pressure with just four or five guys and to tackle and pursue well after the catch, things they did not do well against Missouri. Also, one thing that helped Missouri this game was the moderate success of their run game, which opened up some playaction passing and kept the LB's a little honest. This would be something Texas needs to do on the road; Fozzy and Cody don't need to combine for 200 yards, but the running game should be open for some steady gains. In other words, our offensive line needs to have a strong game and not start out like they did against Oklahoma or against Texas Tech last year.

Nonetheless, I expect several changes. Seeing the opportunities a hobbled Gabbert had against Missouri, I feel that if Colt sees similar ones, he will convert those opportunities and make OSU pay. Also, we too have a big receiver who can make plays after the catch (Malcolm Williams) and more weapons than Missouri has. Bill Young knows this, so I expect a little more blitzing and a little more complexity to try to confuse and rattle Colt McCoy, as they tried to do last year. Donald Booker, who leads the team in sacks and TFLs, is a good candidate for just that, as is safety Lucien Antoine. The Pokes are going to have to be risk-takers up to a point; I don't think they're good enough at D-line to just sit back and try to get to Colt on a basic 3 or 4 man rush throughout the whole game.

I hope Davis is patient with the run game and is willing to take shots downfield in such a big game, because I believe those chances will be there. If we decide to regress back to relying on Colt McCoy being a robotic passer, we can still win like we did last year, but it's going to be a rather uncomfortable ride.