The State of Oklahoma: Muschamp's Big Test This Season

Share All sharing options for: The State of Oklahoma: Muschamp's Big Test This Season

When I was keeping up with the Texas Tech-Texas A&M game through ESPN Gamecast, I could not believe what I was seeing. It was very similar to the feeling when I was watching UTEP run over the Houston Cougars. It made little sense, and I was mixed between shock and laughter. But before I laughed too hard, my memory hearkened back to the end of the disappointing 2007 season, when we watched our defense get gashed for over 200 yards through the air in the first half and nearly 400 in the game by... Stephen McGee. Stephen. Freaking. McGee. Thinking back on my years as a fan, that may have been the most furious I've been at the defense. Ever. I was throwing things at the TV, yelling throughout the house, and thinking dark thoughts about what I'd do if I saw Akina or MacDuff (remember that guy?). I'm not a guy who likes to jump on the "Fire Coach ____" bandwagon, but that game was the final straw in a slew of poor performances, and after that I wanted Akina demoted and MacDuff gone. Please. Anyone else but them. Mack Brown thought so too, and in comes Will Muschamp. And boy, this has turned out to be one of the best moves in Mack Brown's tenure.

Muschamp isn't perfect and not above criticism, but the guy has delivered, and fans can already see the change in attitude and demeanor the defense has undergone in two seasons. Now is his chance to deliver again when we face probably the most balanced offense we'll see this year. Heck, that might extend to the bowl season as well, because it's not like other top teams have been lighting up the scoreboard.

The big story going into the game is the status of both Dez Bryant and Kendall Hunter. Bryant, as you all know, will not play this game or for the rest of the season. Hunter is expected to return but in a limited capacity. These are no small losses for OSU, but at the least they were lost early in the season and OSU has had time to adjust. Even so, the Pokes will present the stiffest challenge to our defense to date, and I'll list why:

There are, though, some issues this offense faces as well. While they've been a fairly successful unit, they are far from the best offensive in the country that some predicted that would be. Again, I feel like making lists, so here's another:

This is a solid offense but has obviously lost some explosiveness without Hunter and Bryant. The loss of Bryant hurts the most, as Robinson has had some chemistry issues with his receivers, leading to mistimed throws, inaccurate throws, and some drops. Still, OSU will still take shots down the field via the playaction game, and Anyiam has the size to be a threat.

One thing I've noticed watching OSU against A&M and Missouri is their use of playaction and other misdirection or option type of plays. Sometimes the playaction fake is honestly a bit half-hearted, but with their reputation running the football it is often an important fake nonetheless. Not only that, they like to employ their backs on screens and get their offensive line in the open field to block. In the run game, they will employ the zone-read, although Robinson has kept the ball a lot less and has had limited success on the ground this year. They will also use the option to get Robinson out on the edge.

I'll focus on a couple screen plays for OSU because I think it will be an interesting thing to look for as we try to bring the heat at Zac Robinson. 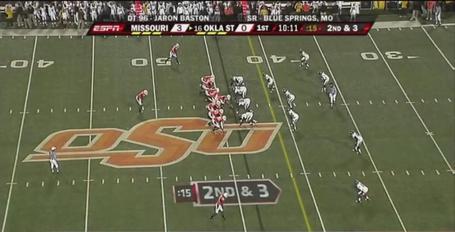 Oklahoma State is in a two TE set with Toston in the backfield. 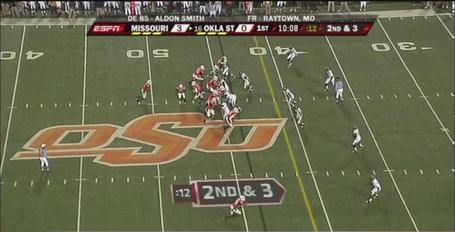 The receiver goes into motion and a handoff is faked to him, causing the linebackers to take a step towards their left. 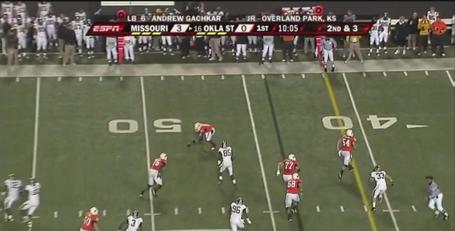 Keith Toston goes to the flat to receive the screen pass. Notice he has both room and blockers to pick up a nice gain. The play fails because Robinson's pass is poor and it falls on the ground. 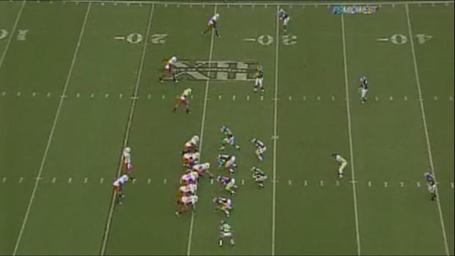 This is the first play from scrimmage for Oklahoma State, and this time they have three receivers on the left side of the field. Toston is with Robinson in the backfield. 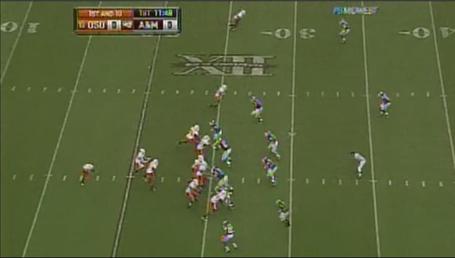 A receiver, like the play against Missouri, goes into motion, moving back to sweep behind Robinson. The faked handoff is to Toston, but the reverse action still causes the A&M linebackers to take a false step. 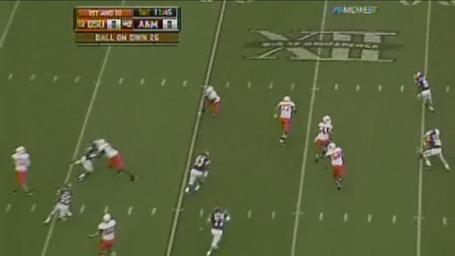 On this play, Robinson's pass was good and a couple of good blocks sprang Toston free for a big gain.

Under Muschamp, Texas has proven to be a team that defends the screen well. They will need to continue that this weekend as Oklahoma State seeks to find ways to neutralize the pressure Texas is capable of bringing. Other ways Oklahoma State can neutralize pressure is to rely on playaction, as we also see here, and look for opportunities down the field. This is why the clash between OSU's run offense against our run defense is big. Even though they haven't lit the world on fire on the ground this month, OSU's offense still flows heavily through their runningbacks and they are persistent. If Texas can frustrate the run game, OSU is ill-equipped to simply drop back and fling the ball around against our secondary.

I expect a big day from Lamarr Houston in the interior, and Ben Alexander will be a good option this game to stuff runs up the middle. Robinson has not been that successful keeping the ball on the edge, so at this point it might be a good idea that he should be encouraged to keep the ball on options or zone-reads to see if he can gain good yardage with his legs. Either way, expect the backs to get the ball a whole lot more in those situations.

I'm excited for this game, and I have a lot of confidence that our defense can hold this unit down. Let's take this one in Stillwater en route to the Big 12 title game.