One Word Says It All: Stillwater (Updated)

Share All sharing options for: One Word Says It All: Stillwater (Updated) 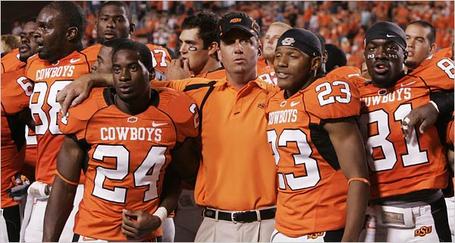 Let the comparisons begin. This game is just like the Texas-Texas Tech game last year. Bluebloodd vs. blue collar players. Storied program vs. small school. The school in Texas that was too good for our players. Take your pick.

Biggest home game in school history, some say. A chance to spoil the national title hopes of the blueblood Longhorns and give a working-class football program a shot at that elusive first Big 12 championship.

"We’ll try to weather the storm and get a win."

"We’re going to get their best shot," Texas quarterback Colt McCoy said. "It’ll be everything you see on film, then multiply that intensity times 10."

So now they think the Horns are dismissing the Cowboys. The Longhorns just need to get over their hump.

Oklahoma State dreams of being Texas.

OK, who doesn’t — privately if not publicly, upside-down horns or not — with the Longhorns enjoying decadent levels of resources and support and success that may be unmatched anywhere across the country?

OSU could be worried about that unknown making an impact in the game.

The true freshman receiver from Garland (Texas) Rowlett is the national high school record holder in the long jump (26-10). Goodwin has begun to emerge as another target for McCoy, catching four passes against Oklahoma and Missouri. He has the explosiveness and speed to change a game.

The Pokes are going to war with who they have.

"I’d love to have those guys,” said co-offensive coordinator Gunter Brewer of Bryant and Hunter, "because of what they’ve been able to do in the big games. I’ve yet to see, other than Zac (Robinson), who can be that great player in that key matchup game. We’re going to find out whether one of those guys can step up to the plate and make a play against a quality team like this.

"Are we comfortable? As comfortable as we can be. We love our kids. We’re going to go to war with who we have.”

These people love their quarterback. It's Colt vs. Zac. Zac Robinson for Heisman.

OSU football. If things unfold the right way in the 7 p.m. OSU-Texas contest inside the sold-out stadium bearing his name, the Cowboys' No. 1 fan will witness the first stage of "Sittler's Scenario."

A sequence of events must occur between tonight and the Big 12 championship game on Dec. 5, but the end game in my plan calls for OSU quarterback Zac Robinson to win the Heisman Trophy.

What a way to spend Halloween. The Texas-OSU history has been wacky.

It's also Halloween, when the peculiar seems so very probable, when weirdness reigns. Players from both teams, especially those who play for Oklahoma State, were asked about the streak this week.

This is the Horns' last hurdle this season.

I like everything else about the Cowboy offense, especially the offensive line, which with monster left tackle Russell Okung is tied for the national lead in sacks allowed. With Bryant drawing attention, I think OSU could make a lot of headway on Texas' brutal run defense, with or without Hunter. But the Cowboys don't have another reliable deep threat of Bryant's caliber (I'm not sure one exists in college football this year outside of A.J. Green in Georgia) who can consistently draw the Longhorns away from the line of scrimmage, where they lead the nation against the run after holding Texas Tech to –6 net yards on the ground and Oklahoma to –16. OSU should be considerably better than that, eventually, but not good enough to keep pace with the offense that went on four long touchdown drives in five first half possessions last week at Missouri. If the Cowboys fall behind by two scores in the second half, defensive ends Sergio Kindle and Sam Acho are going to make things distinctly unpleasant for Zac Robinson in the pocket, whether he identifies a new favorite receiver or not.

Fozzy has a new move.

Fozzy Whittaker has a new signature move, but he didn't plan it. Three times this season the Texas tailback has taken the ball on a play designed to go up the middle and bounced it outside for a touchdown. Twice, he went airborne for the last couple of yards and hurtled over the pylon in the corner of the end zone.

Whittaker said he has no memory of consciously deciding to launch himself toward the goal line. It is almost as if something has been ingrained in him to keep moving while he can, and to not take another carry for granted.

"I don't even know how I process it that fast," said Whittaker, a 5-foot-10, 190-pound sophomore from Pearland.

The defense has clean up duty.

The No. 3 Texas Longhorns have given up 15 turnovers this season and have yet to pay much of a price for it.

The defense simply won't allow it.

On the ensuing drives after the turnovers, opponents have scored just one touchdown and one field goal. Seven of those possessions went for negative yards. Four ended when the defense got the ball right back with a fumble recovery or interception of their own.

"We tell the guys we're the firemen," defensive coordinator Will Muschamp said, "and we have to go put out the fire."

It's all about the secondary.

In 2009, the Texas defense has gone from good to great.

And while Sergio Kindle and Lamarr Houston have received most of the accolades, the reason the Longhorns have made the leap starts far behind the defensive line.

It's been about the secondary.

Mack Brown believes the Horns have the best special teams in the country.

Stewart Mandell picks the Horns to beat the Pokes.

The Cowboys deserve commendation for rolling off five straight wins despite injuries (Kendall Hunter) and suspensions (Dez Bryant), but those victories have come against Rice, Grambling, Texas A&M, Missouri and Baylor. And while Oklahoma State's run defense has improved from last year, it still ranks 106th nationally against the pass -- bad news when facing Colt McCoy.

Barry Tramel predicts this will be a defensive struggle.

The most common theme in OSU-Texas games has NOT been the Longhorns’ vaunted comebacks. It’s been offense.
Texas’ offense has rolled against the Cowboys, but the Cowboy offense has rolled against Texas.
Last season included. Texas won 28-24, which sounds like a good solid football game, but the ‘Horns had only eight possessions. That’s four TDs in eight tries, a 50 percent success rate that is damning of a defense.
In other games, the score tells the tale: 38-35, 36-10 (in 2006, OSU was no threat), 47-28, 56-35.
But here’s a prediction. Defense rears its head Saturday in Stillwater.
The Texas defense is the pride of the team. The Texas offense, counting special teams, is the weak link.

This is the Cowboys' biggest opportunity.

In Mike Gundy's five seasons, Oklahoma State has developed a reputation for explosive offenses, flirted with the national spotlight and emerged as a contender in the tough Big 12 South -- almost. The Cowboys have beaten nine of their 11 conference opponents. Can you guess which notches they've yet to carve into Pistol Pete's gun belt?

In-state rival Oklahoma. And Texas, everybody's rival. Gundy's Cowboys have gone 0-8 against the Big 12's big boys, which is why any conversation about the league starts with Texas, or with Oklahoma, and usually ends there. Texas Tech has been a nice story, with the mad scientist's passing fancy; Oklahoma State an interesting sidebar, with the coach's rant and the tycoon's millions and that brand new stadium.

Before the season, quarterback Zac Robinson told reporters the Cowboys' goal, as always, was to win the Big 12 South. And he added: "That goal is more realistic this year."

The Pokes have a chip on their shoulder. A few Cowboy players feel disrespected since the Longhorns were not interested in them.

Yet, Andre Sexton and Russell Okung get no respect when they go home to Texas.

That’s because Sexton, a senior linebacker, and Okung, a senior offensive tackle, weren’t recruited by Texas. And in Texas the general consensus is that being a Longhorn equates to being the best of the best.

"Texas is the dominant school down there," Sexton said. "A lot of us that come from Texas... we don’t get that respect."

Yet when asked how he’s treated in his home state, Okung said. "They definitely don’t think I am up to par, being from OSU."

Even senior cornerback Perrish Cox notices it when he returns to his home state. The Waco native was recruited by the Longhorns but didn’t want to commit early, like Texas requested, so he explored his other options before signing with OSU.

More on the same subject...

Linebacker Andre Sexton on not being recruited by the Longhorns:

"It’s something I use as motivation. It’s a school I grew up watching and liking. You kind of take it personal when another school doesn’t recruit you."

OSU's program has come a long way, but...

Oklahoma State has plans. Big plans. Bigger than maybe any other ascendant football program in the nation.

Maybe too big for its britches.

It's got plenty going for it, not the least of which is a 14th-ranked, once-beaten team that plays its biggest game perhaps in school history tonight against Texas.

But, it's still Oklahoma State. Off-the-beaten-path, beating-the-Rices-and-Missouris-but-not-the-Texases Oklahoma State. The Cowboys will lose again tonight 31-24 on the strength of the Longhorns defense and special teams.

Zac Robinson on the game with the Longhorns.

It is a sellout.

An Oklahoma State official reported on Thursday night that all tickets for seats in the stadium bowl have been sold, resulting in what qualifies for a sellout for the nationally televised clash with third-ranked Texas.

Mike Gundy is at the top of his game right now.

Gundy's reputation, for better or worse, is often defined in the national media by a post-game outburst more than two years ago.

What he has done this season should be enough to change that perception.

It would have been pretty easy for Oklahoma State to collapse.

Since late last summer, the Cowboys have been hit with a dizzying number of injuries, suspensions and departures.

This type of game is what Poke defensive coordinator Bill Young lives for.

Oklahoma State's hiring of veteran defensive coordinator Bill Young was made with games like this mind. In its final three losses in 2008, the Cowboys allowed 159 points. The Cowboys have been improved this season, much more than their 56th-ranked defense would indicate. They're 18th nationally against the rush and 34th nationally in pass efficiency defense, a much more accurate barometer. Young has proved capable of interesting adjustments, something Texas offensive coordinator Greg Davis understands.

If Gundy finally beats Texas, he can put out a new video.

But on Saturday night in Stillwater, Okla., Gundy will get his chance.

The chance to show that he’s advanced the program to something bigger than the second-best team at the Holiday Bowl.

The chance to show that he’s worth the seven-year, $15.7 million contract extension that OSU signed him to, after a season in which he lost three of his final four games.

The chance to show that Mike Gundy is more than what most of America’s football fans know him for — his YouTube "I’m a man! I’m 40!"" postgame rant in 2007 that embarrassed even the young athlete that he was allegedly trying to defend.

We hope to see some of this type of play from the Pokes.