Long day mostly away from the computer has delayed me, so this is late on the heels of yesterday's OSU Offensive Preview.

Before discussing the personnel, let's start with a look at Houston's first play from scrimmage against OSU, which provides a nice look at how to attack the Cowboys' base zone defense. (Click any image to enlarge.)

Kevin Sumlin opens in a shotgun, two tailback set, with dual receivers to the top and a lone receiver split to the right. 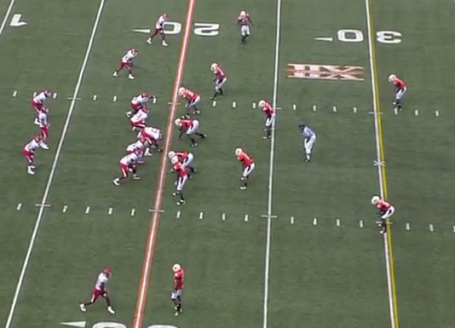 Prior to the snap, the left tailback is sent in motion. No one on OSU budges, letting Keenum know the defense is likely in a zone. 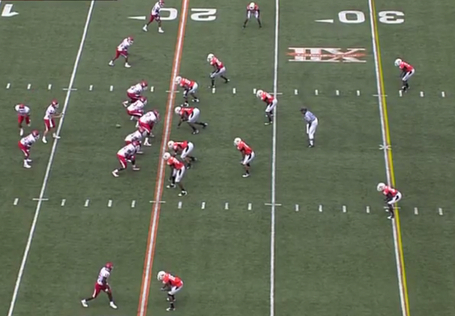 Keenum fakes an inside handoff and, as he starts to his right, it looks for all the world like a screen pass to the tailback at the bottom of the screen. OSU's defense begins to flow to the playside. 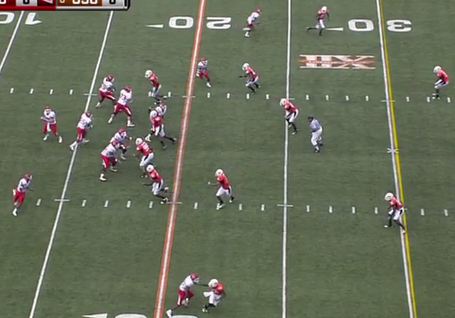 But Keenam stops, pivots, and throws back to the opposite side of the field, where the tailback who was faked the handoff is slipping into the flat. Three UH linemen are releasing to block a suddenly out-of-position Cowboys defense. 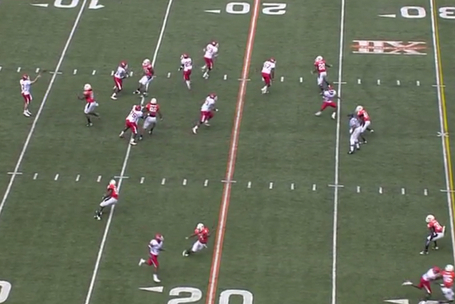 As the ball is received, DE Jamie Blatnick has no play retreating from his upfield rush, RCB Terrence Anderson is getting creamed by two blockers, MLB Donald Booker is nowhere near the play, and the Cougars have a big first down gain on their first snap from scrimmage. 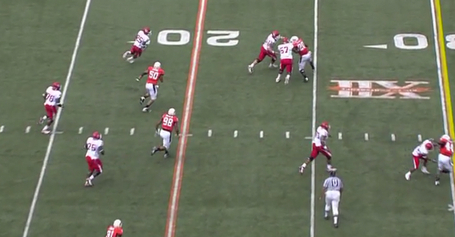 DEFENSIVE LINE:  The Cowboys' back seven isn't great, but the defense's biggest problem is their weakness up front. Defensive end Ugo Chinasa is a solid player, but it's slim pickings beyond him, and particularly inside, where the Cowboys rotate three or four mediocre tackles who rarely get any push or create pressure. Derek Burton is a converted defensive end with decent enough quickness, but no ability either to create his own push or -- because his fellow linemen aren't doing much -- move freely to make plays. Swanson Miller isn't a bad athlete, but he's simply not strong enough to be disruptive; Chris Donaldson is stronger but lacks the mobility needed to give OLs much trouble. Opposite Chinasa the Pokes have mostly been playing the nondescript Jeremiah Price and, in spurts, the highly touted prospect Richetti Jones. I haven't been following OSU closely enough to say why Jones isn't getting more PT, but he seems clearly the only end with the athleticism to be a difference maker -- in limited action this season the sophomore has 6 tackles for loss, including 3 sacks (second most on the team).

LINEBACKERS:  Bill Young runs his defense to flow everything to his linebackers, which is why the preseason injury to Orie Lemon was a big deal. When OSU plays three linebackers (about half the time), it'll be Patrick Lavine, Donald Booker, and Andre Sexton. Booker, a disciplined player and sure tackler, is good against the run but lacks the speed to be a good player in coverage or out in open space. I'm not a big fan of either Lavine or Sexton, both of whom represent the type of defensive athlete that the Cowboys must upgrade in with their recruiting if they're going to break through.

As pertains to Texas, Bill Young is generally going to commit the requisite personnel to deal with the run game and make teams prove they can win it through the air. As I see it Texas doesn't need to pop the Cowboys for 200 yards on the ground, but my biggest worry is if Greg Davis only dips his toes in the rush attack waters -- wherein OSU successfully controls Texas' tepid effort and approach, leading Davis to abandon the run in a one-dimensional pass attack against the Cowboys. If Texas has another 50-30 pass-rush split again this year, it'll be a bad sign.

DEFENSIVE BACKS:  When OSU is in its base 4-3 defense they go with Perrish Cox and Terrance Anderson at the corners and Lucien Antoine and Victor Johnson at safety; when they go to the nickel, Johnny Thomas typically comes in at safety, with either Cox or Lucien taking the nickelback slot. It's a decent grouping, but there are no elite players in the bunch -- the sum is greater than the parts. Cox gets the recognition because he's a senior and he returns some kicks for scores, but his reputation exceeds his abilities, and I like Antoine a bit better both as a run stopper and cover guy. This is a group that does a good job being where it's supposed to be -- the safeties hang back deep and offer good support, the corners do a solid job playing their roles, but it's a unit that won't keep you from dictating what you want to do.

BOTTOM LINE:  I don't want to be too dismissive of this OSU unit, because while the personnel is underwhelming, they're well-coached and do a really nice job of making you earn it. The trouble, for them, is that the personnel can't stop a unit that knows how it wants to attack them. The Cowboys are particularly vulnerable to counters, screens, and smartly schemed misdirection -- it will be imperative for Texas to attack the Pokes strategically with plays that force OSU to react and defend sideline to sideline.

Texas' offense looked good last week against a poorly coached Missouri defense; this week, we'll get our answer to whether Greg Davis has really turned a corner with this offensive unit. If he has prepared us poorly for attacking this game, it'll show and we'll be in a tight game that we'll need to win with our defense. If Texas attacks OSU smartly and systematically, we'll comfortably put up 30+ points, more than enough to win this thing.