The Austin American-Statesman looks for meaning in the numbers.

The Texas Longhorns are 4 games into their 12-game regular season.

Some of the numbers look great. Some look good. Others are perplexing.

Notice how few great quarterbacks there are in college now? Makes one really appreciate Colt McCoy and Bradford. By the way, a year after setting the all-time NCAA record for completion percentage at 76.7, McCoy's up to his old tricks. He's at 71.03 percent — one of four to top 70 percent, although only Northwestern's Mike Kafka and Central Michigan's Dan LeFevour have more pass attempts than the Longhorn

We are definitely a Texas team.

Yes, you are reading this story in NewsOK.

The University of Oklahoma competes toe-to-toe with the University of Texas on the football field, but when it comes to university-wide graduation rates, it’s no contest.

The University of Texas wins by more than two touchdowns.

UT has a six-year graduation rate of 78 percent, compared to 63.5 percent for OU.

Great history in both programs, old SWC foes, beautiful new stadium. And then...

Mike Sherman debuted on national television this season the way Dennis Franchione did in his last one.

As it was then, only one thing could have helped Sherman in front of the camera: Cable going out.

Everything was left hanging out there for all to see. The Aggies' flaws were on view Saturday night.

Ultimately, the glare of the ESPN2 spotlight proved too bright for the young Aggies (3-1), who built some gaudy statistics during the first three weeks of the season while throttling three overmatched opponents in College Station. But they had too many penalties (8), turnovers (2) and missed opportunities (countless), with the telling ones occurring in rapid-fire fashion in the latter stages of the first half.

"I wish we could have made it more of a game," A&M coach Mike Sherman said. "But those days will come."

Arkansas (2-2) represented a significant step up in competition for A&M, which started six freshmen and played roughly triple that total. Not surprisingly, the Aggies were reminded they are a work in progress and should not be planning to hang on to their status as the NCAA leader in total yards (574.3 per game) or sacks (4.67 per game) for the long haul.

Heisman candidate Jerrod Johnson got a big dose of reality.

Jerrod Johnson was the best non-televised quarterback in the country before Saturday.

Then the bright lights came on.

And reality set in.

The Texas A&M junior has the tools pro scouts drool about — a live arm, quick feet, good size, and a good head on his shoulders — but none of that saved him from a humbling evening in what could have been a program-turning win for the Aggies.

Instead Johnson was beat up by the best defense the Aggies have faced this season. The 47-19 loss to Arkansas in the Southwest Classic wasn't indicative of what could have been but was indicative of what is: Johnson is a good young quarterback who has a few miles to go before he can be mentioned in the same sentence with the Tebows, McCoys, and Bradfords of the world.

Mike Sherman feels bad about putting Jerrod Johnson back into the game.

Heading into Oklahoma State week, A&M quarterback Jerrod Johnson described himself as "sore" from the pounding he took in Saturday’s 47-19 loss to Arkansas.

"Just the regular knocks you get from a game," he said today. "Nothing too major."

Mike Sherman, however, continues to blame himself for the last knock Johnson took.

The Aggies coach re-inserted Johnson into the game in the final seconds after an Arkansas fumble. On second down Johnson was blasted from behind by Hogs linebacker Tenarius Wright with two seconds left, forcing a fumble.

I wouldn't call it a blazing fire... The Cowboys jump right into the fire in Big 12 play.

OSU’s goal of winning a Big 12 title is still attainable, and the Cowboys face a stout test to open their Big 12 schedule, traveling into one of the conference’s toughest environments: Texas A&M’s Kyle Field.

Four questions about the Pokes.

What did the weekend reveal about Texas A&M?

And that’s good news for the Cowboys, who could have been heading for Kyle Field with the home team at 4-0 amid mounting momentum. Instead, they’ll arrive with some old issues lingering for A&M.

The Sooner offense is in a bind.

This Sooner offense is limited.

Whether they run the ball 40 times or throw it 60; take each snap from under center or line up in the Wildcat every other play.

No team replaces a Heisman winner, an All-American tight end and the nation’s touchdown receptions leader and just chugs along. But the losses of Sam Bradford, Jermaine Gresham and Ryan Broyles aren’t the only reasons for mediocrity.

He is still Big Game Bob.

Is he indeed worthy of his "Big Game Bob" moniker?

A.) Stoops is 4-6 in bowl games; has been beaten in his last three national championship appearances; and has lost five straight BCS bowl games.

B.) Stoops also is 111-18 (.860) against everybody else, has claimed the last three Big 12 championships and won six conference title games in seven appearances.

The Land Thieves took quite a tumble in the polls.

After a 21-20 loss to Miami Saturday, Oklahoma dropped to its lowest ranking in nearly two years, falling 13 spots.

OU and Cal have something in common.

Depending on your point of view, one of college football's great charms or absurdities is how a season can seem over just a few weeks after it began. So it is now for several big-name teams, most prominently Oklahoma and California, whose fans must now drastically recalibrate their expectations because of a lack of offense.

Sooner Sports has a video update on Corey Wilson. It is great to see his progress.

Chuck Carlton was not impressed with the Big 12's nonconference schedule.

Here's the TV schedule for October 17.

Colorado running back Darrell Scott is no longer returning kickoffs. Is it a health issue?

Colorado running back Darrell Scott did not return kickoffs in the West Virginia game and played sparingly at running back because of a knee injury he suffered on the first kickoff return in the Toledo game in Week 2.

Scott said Sunday he is no longer returning kicks. He did not want to explain why but said it is not a health issue. He said he had an excellent practice Sunday evening.

Sophomore Brian Lockridge has filled in well the past two games, and will likely continue in the role if Scott doesn`t return to it. Dan Hawkins was less definitive about Scott`s future in kickoff returns and indicated it is a health issue that is keeping him out.

The Buffs have a few things to be proud of. Unfortunately, one of them isn't the football program.

Colorado should strive to field a football team Nikki Marshall can be proud of.

Or perhaps a hoops squad that competes on the road as hard as Jenny Barringer.

Obviously, these are not the best of times for this athletic department. The breadwinner of the family -- CU football -- is not bringing home the bacon or even providing any sizzle at Folsom Field.

The Buffs are 1-3 with a road trip to Austin looming, which means Dan Hawkins` vision of a 10-win season has already been replaced by a desperate scramble for a 6-6 finish.

"He's going to be in competition this week . . . we'll make sure he's the best guy," special teams coach Kent Riddle said Sunday of Goodman, who endured his first subpar game of 2009 in CU's 35-24 loss at West Virginia.

Entering the Thursday night contest, Goodman had made three of four field goal attempts - including a career-best 54-yarder - in the three previous games.

Against the Mountaineers, he missed three of four attempts, with one of those a 57-yard try that Riddle said Goodman had shown he could hit during pregame kicking.

"He has the ability to make that; he made a couple in pregame," Riddle said. "He just changed his mechanics a little bit trying to get a little extra juice on it and pulled it. We'll iron that out . . . he can make that one."

The Cyclones take the blame for the loss to Kansas State.

He didn't blame officials, despite his sideline displeasure late during the first half at Arrowhead Stadium.

Missouri plays Nebraska on Thursday night. Here's the good and the bad.

Add to that the 52-17 shellacking that Missouri administered at Nebraska’s Memorial Stadium last season, and you might wonder what all the fuss is about over a Thursday night Big 12 Conference opener between Huskers and Tigers.

"We’ve been doing a pretty good job here in recent years," MU senior linebacker Sean Weatherspoon said Sunday. "But if we want to be remembered, then we’ve got to keep doing it."

Through four starts, Blaine Gabbert has yet to be picked off. Gary Pinkel knows that streak cannot last.

Maybe it wasn't quite like violating the time-honored rule of not mentioning a no-hitter in progress. But even if he knew somebody eventually would ask, count Mizzou coach Gary Pinkel as slightly disappointed that the topic of sophomore quarterback Blaine Gabbert's interception-free season was broached during Sunday's media session. 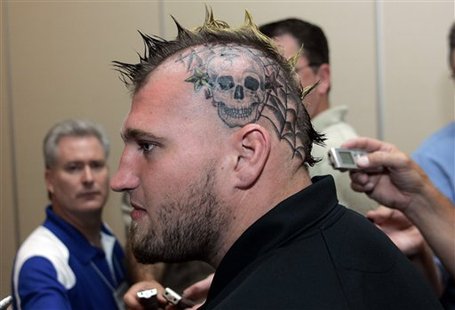 Welcome back. Brandon Carter is a Red Raider again.

This weekend, he could be back in his old spot, and not a moment too soon with the number of players who got hurt in the Red Raiders’ 48-28 victory over UNM. Carter was reinstated to the team seven days after Tech coach Mike Leach classified him as indefinitely suspended.

He returned to practice Sunday night for the first time in more than a week.

Here is your feel good story of the day.