After an impressive debut against Texas Tech, the Longhorns only used the WildHorn in the red zone and ran two plays: the counter read that accounted for 39 yards against Tech and what might be a power play pulling the playside guard into the hole. Concern about being able to run the ball in the red zone was the most likely reason for the coaching staff to only use the formation inside the 10 yardline, but the results were not particularly encouraging in that respect.

Early in the second quarter, leading 23-7, the Longhorns were already well on their way to blowing UTEP out and had sustained one long drive. However, Texas did fail to score a touchdown after getting possession inside the 10 yardline after the botched punt attempt by the Miners. On another sustained drive, the Longhorns found themselves inside the 10 yardline once again with a first down to start the second quarter. 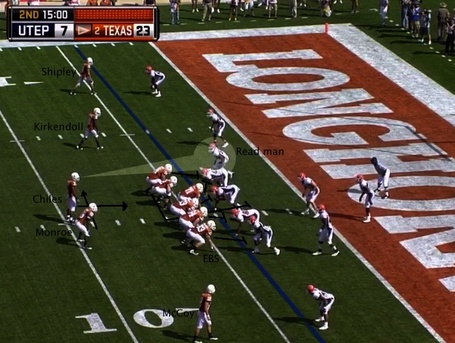 In the now-familiar WildHorn formation, the Longhorns set up for a new play, though it looks like a counter read before the snap -- it has the same alignment. The first thing to notice is that since the Miners play in a 3-3-5 defense, the read man is now a linebacker on the strong side of the field. The second thing to notice is that instead of pulling the backside guard and tackle, only the playside guard pulls, this time into the hole between the backside guard and tackle -- the reason for calling it a power play, though the Longhorns might call it something else. The playside tackle stays to double team the strongside defensive end along with the center, Chris Hall. Notice also how close the safety is to the line of scrimmage because Texas is inside the 10 yardline. 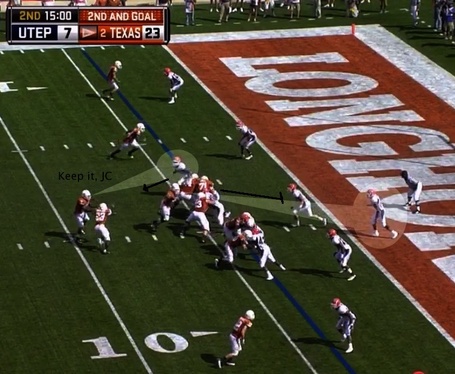 The strongside linebacker heads upfield to take away Monroe, so Chiles makes the read of keeping the ball. Notice that Charlie Tanner has two options as he pulls through the hole -- the safety, highlighted, or the linebacker. I have the linebacker marked as Chris Hall's man, but it could be Ulatoski's responsibility. Either way, one of the players should get off the double-team block to take the linebacker -- that's one possibility. It's also possible that Tanner is supposed to block the closest player to the line of scrimmage when he pulls through the hole. 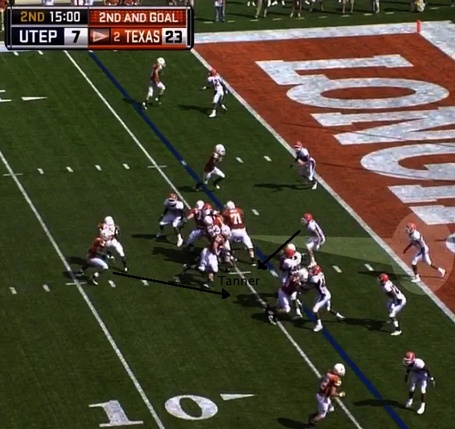 Tanner is locked in on the safety, while the linebacker steps up to meet Chiles in the hole. 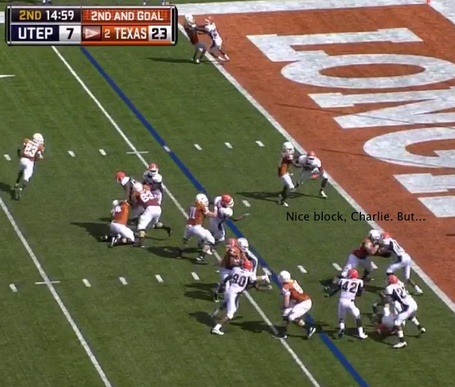 Tanner throws a great block against the safety, eventually driving him into the end zone. The problem is that the player he decided not to block, the linebacker, is about ready to tackle Chiles. Notice also that Kyle Hix struggled to hold his block long enough to allow Chiles to make any type of move to avoid the tackler in the hole. 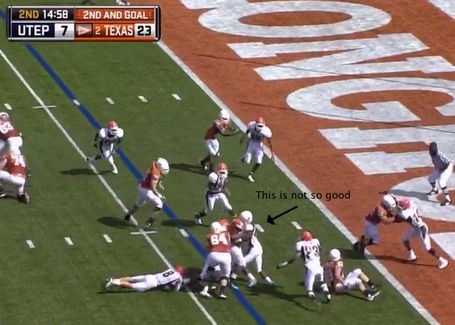 Despite the poor choice by Tanner, Chiles might have been able to make it to the end zone or close to it had Hix held his block longer, as the WildHorn triggerman mostly runs through the arm tackle by the linebacker but gets stood up by the end.

The adjustment in the blocking scheme is a good one because it doesn't try to pull a player to block someone already optioned off and gives the Longhorns a much better chance of breaking off a successful play by pulling the guard into the hole instead of to the outside, but the combination of the poor decision by Tanner, the inability to get off the double-team block and get to the second level by the playside combination, and the inability of Hix to hold his block resulted in a short gain for Chiles. It's all about execution, people.

The drive featuring the first play out of the WildHorn formation stalled and ended in a field goal. The following possession for UTEP, the Miners actually managed to pick up a rare first down on a Donald Buckram run, but the Texas defense stiffened and forced a punt. Marching down the field, the Longhorns once again moved inside the UTEP 10 yardline. 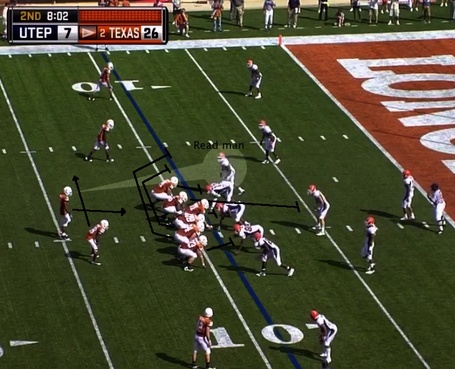 Since Monroe is on the right of Chiles -- the weakside of the field, this play will be the counter read again. The major difference, however, is that Monroe is now lined up slightly in front of Chiles and maybe two steps to his right, a slight adjustment from all the previous iterations of the play. Returning to the version of the counter-read play shown against Tech, the backside guard and tackle will both pull. Instead of double teaming either the nose guard or the strongside defensive end, the left guard, Tray Allen, heads to the second level to block the linebacker. 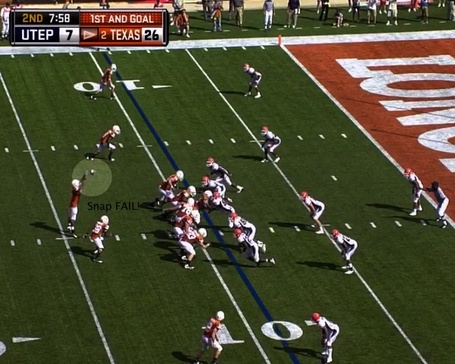 For the second time in six WildHorn plays, Chris Hall makes another poor snap, hiking it above the head of Chiles and throwing off the timing of the play. 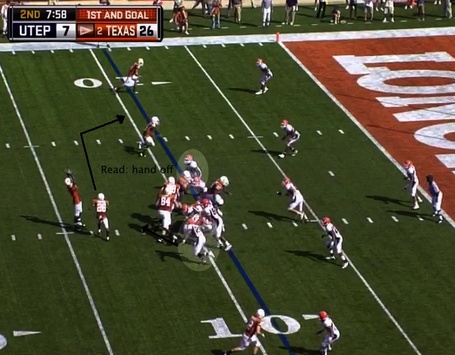 The read linebacker on the play breaks down at the line of scrimmage, giving Chiles the head of handoff. Of course, he can't make the handoff because he's attempting to secure the football. If the snap is good and Kirkendoll and Shipley make their blocks, Monroe has an easy trip into the end zone unless the safety in the middle of the field can make the play. 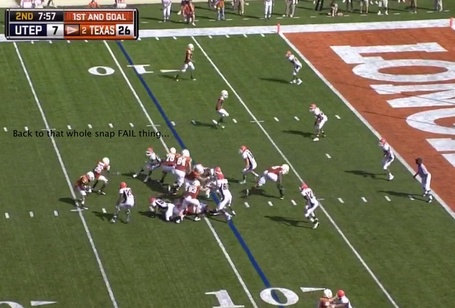 So, of course, the poor snap has disastrous results for this play, as the backside linebacker, unblocked in the scheme because he's on the backside of the play, is now in the backfield, as well as the defensive end good ol' EBS was supposed to block but had to chop because he had so far to go to block him. 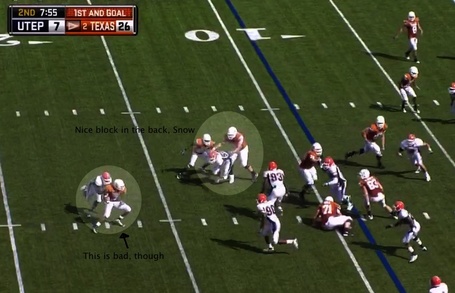 Things are breaking down quite chaotically, as Chris Hall loses his block and Kyle Hix whiffs on a linebacker heading to the party. About the only two things that are going well for the Longhorns right now are the fact that Chiles has mostly avoided the oncoming linebacker who was supposed to be on the backside of this play to minimize the loss by at least a little bit and David Snow's nice block in the back of the supposedly optioned linebacker on the other side. I give Sam Acho more style points for his leg whip sack though.

Just for fun, here's if-then statement for most football plays -- if snap = FAIL, then play = FAIL. Chris Hall has a reasonably complex job as the center, but the issue here is that he's having trouble in the WildHorn with the simplest part of it.

Up 47-7 coming out of halftime, Texas received the ball to start the second half. Eddie Jones and Marquise Goodwin had some communication problems on the short kick, leaving the Longhorns with the ball at the inside their own 10 yardline. Texas had to convert two third downs before Vondrell McGee broke off the big play of the drive -- his 51-yard run. On the play directly following, Greg Davis calls for the WildHorn for the final time on the day with the Longhorns at the UTEP 9 yardline. 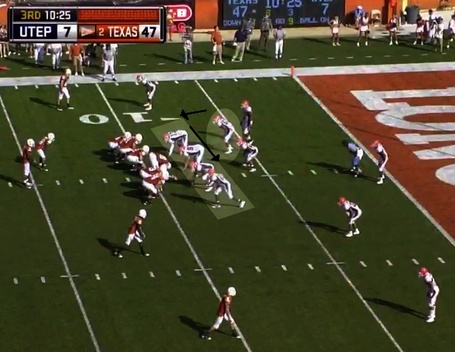 For the first time, UTEP shifts their defensive front prior to the snap. Instead of leaving the weakside defensive end on the left shoulder of the Texas left tackle, he shifts inside a gap. Perhaps UTEP figured out that every time DJ Monroe is lined up on the weakside of the field with his "counter read" positioning several steps away and one step ahead of Chiles, that the Longhorns will run the counter read. That means that EBS must block that weakside end as the guard and tackle pull. As we will see later, that presents a problem. 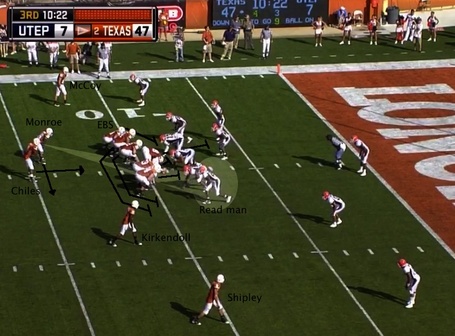 It is indeed the good ol' counter read play, as Chiles will key on the strongside linebacker and Ulatoski and Tanner will pull. Besides the shift of the defensive line, it's pretty much the same defense UTEP used for the two previous WildHorn plays. 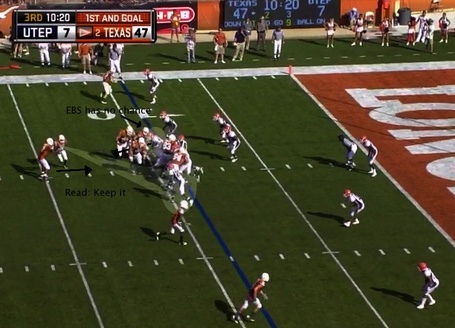 The weakside defensive end comes off the ball upfield with little resistance as EBS tries to block him without success. Meanwhile, Chiles reads the strongside backer crashing on Monroe -- it's a keeper. Hix and Huey both get good initial movement on their opponents. 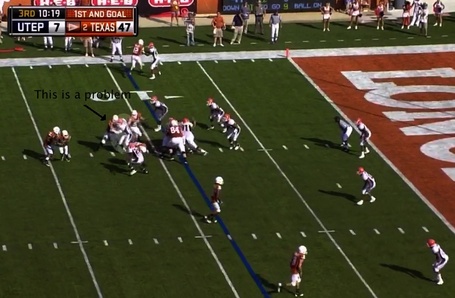 Just as Chiles decides to keep the ball, he's faced with the defensive end almost right in his face. Ulatoski, the pulling tackle, picks up the block on the charging end, while Tanner throws himself in the general direction of the strongside backer, the player supposedly optioned off on this play. 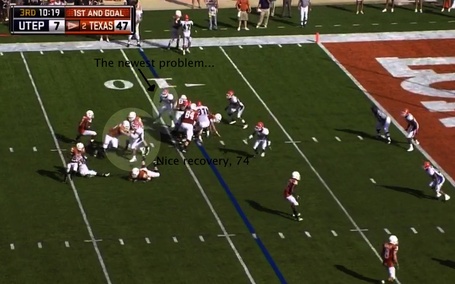 Ulatoski gets a nice block, but the end disrupts the running lane for Chiles, who now has the avoid the backside baker pursuing the play. 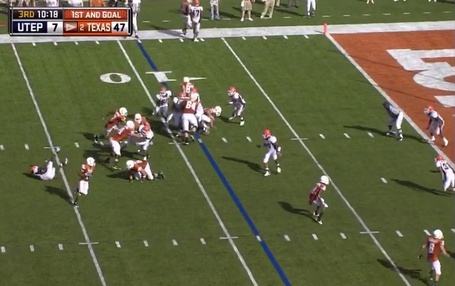 Chiles uses his speed to beat the weakside defender to the hole, leaving two defenders for Chiles to make miss to pick up some yardage, one of whom, on the right, took several bad steps following Monroe. 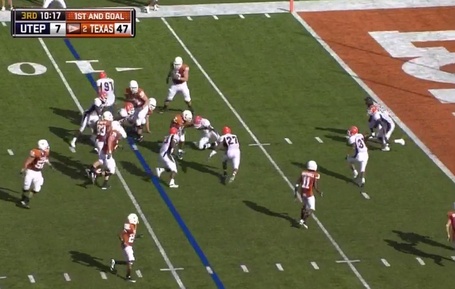 The defender, probably accounted for in the blocking scheme by Ulatoski, who had to block the defensive end slicing into the backfield, makes contact with Chiles about two yards downfield. Chiles picks up another after contact, making this play by far the most successful WildHorn play against UTEP. Three whole yards. Yippee!

In the sunshine pumping world, the play a huge success, as Chiles picked up one-third of the yards possible on the play. It was also three times more successful than the second-best WildHorn play of the day.

In the real world, UTEP made a defensive adjustment to disrupt the play by virtually guaranteeing that they could get a guy almost unblocked into the backfield. There should be a line call by the center before the play to adjust the blocking, most likely by only pulling the guard and leaving the tackle to block.

The other aspect of this is that it seems like a waste of resources to have Tanner attempt to block the player supposedly optioned off on the play -- that's the point of option football, to option at least one defender off so you don't have to block him.

Part 3 will feature final thoughts on both games and some plays the Longhorns should have installed during the bye week.