Played wholeheartedly, football is a soul-satisfying outlet for the rugged, courageous
type of boy who likes physical contact. Played halfheartedly,
football is a waste of time and energy. Football is no halfway game.
To play it, you have to get wet all over. - Dana Bible

Time to run the gauntlet. It is October again.

In what has traditionally been the defining month of UT's seasons, the Longhorns (4-0, 1-0 Big 12) will face three ranked opponents — Oklahoma, Missouri and Oklahoma State — away from home following the Colorado game. For those UT players who've been around a while, this is nothing new.

Since 2002, the Longhorns have played 16 ranked teams in October. They're 12-4 in those games, including a 3-0 run through OU, Missouri and OSU in 2008. This season, they'll get to ease into the month against the struggling Buffaloes (1-3, 0-0), but the Longhorns realize they're in for another grind.

We should be seeing a lot of red on Saturday. There is one stat that both Colorado and Texas share: We are both damn good in the red zone.

The Longhorns and Buffaloes are tied for the top red zone offenses in the country. Both teams have scored every time they've gotten inside the opponent's 20-yard line this year.

Colorado is 12 of 12 so far, with 10 touchdowns. The Longhorns are an impressive 23 of 23 in the red zone. Texas has scored 16 touchdowns — 12 by running plays — and kicked seven field goals.

The Pokes are worried about Jerrod Johnson.

If he makes defenders miss and keeps plays alive a la Steelers’ quarterback Ben Roethlisberger, it makes it tough on the Cowboys’ secondary and defense as a whole.

"From a cornerback’s standpoint, (a quarterback scrambling around) is probably the worst thing you can have other than getting beat deep," said senior cornerback Terrance Anderson.

"It means we have to stay in coverage longer than we need to be, receivers are running around like crazy. But in practice we’ll try and stress (it) with scrambling drills, stuff like that."

"Those people, I’m sure they’re good play-callers after the fact; they can call plays when they get their team," Stoops told reporters after Monday’s practice. "Our game plan was what it had been all along; I don’t see where people get that. We went right down the field and scored on the first drive of the game. We were calling those same plays throughout the game."

And he is still a tad bit defensive.

"Miami had a very successful offense, right? That’s what everyone’s talking about," Stoops said. "Well, we had the same yardage in every which way and we’re one point short, right? So in the end, it’s funny how one is horrible and the other is awfully good."

How is Bradford doing? (Here is the transcript of the press conference.)

And doctors say the odds of a hit reinjuring his shoulder are the same as before he injured it.

But the reason the Heisman Trophy winner may not play against Baylor this weekend — or possibly again this season if he ends up requiring surgery — is the soreness and fatigue he encounters in his shoulder after throwing for an extended period.

Bradford is still hopeful. Barry Tramel is hopeful, too.

We are definitely thinking about you, Sam. Bradford wants to play in the Baylor game before taking on Texas.

Really? The University of Oklahoma school paper does not agree with the polls.

Is it just me, or are the college football rankings a little overzealous this year?

Someone in Alabama thinks the football gods are giving the devil his due.

Prior to this season, the usual punishment for the Oklahoma coach’s constant running up the score and occasional arrogance was humiliation in a BCS bowl game.

When that became not enough, the football gods smote golden boy quarterback Sam Bradford in the season opener this year, causing the Sooners to lose to an inferior BYU squad.

With Bradford out for the next few weeks, Stoops still didn’t get the message.

After wins over Idaho State and Tulsa by a combined 109-0, the football gods guided Miami quarterback Jacory Harris’ arm to 202 yards passing and three touchdowns to lift the Hurricanes — another team inferior to the Sooners, at least when Bradford is around — to a dramatic win.

And now, sitting at 2-2 with the grind of conference play yet to begin, Oklahoma and Stoops are in a bit of a pickle.

During the preseason, the Big 12 South was considered the best division in college football. That has certainly changed.

The Austin American-Statesman staff writers have a Big 12 discussion.

Is the Big 12 a conference of Haves & Have Nots?

Jaron Baston talks about their game with Nebraska on Thursday night.

Nebraska wants to be at the top of the North.

Waiting to be drawn on Thursday night is a line of separation — if not elimination — for the loser. In a matchup of two of the three contenders for the Big 12 North title, this game is worth two: the game you win and the tie breaker, if it comes to that, over the contender you just defeated.

The Cornhuskers need to find something on Thursday afternoon to take their off the evening game.

Nebraska quarterback Zac Lee is bracing for a long afternoon in front of the TV.

The late-evening kickoff later that day will mean that the Cornhuskers will lounge around the team hotel as they prepare for Missouri in a pivotal North Division opener for both teams.

But Lee says he’s willing to try anything, even soap operas and the "Oprah Winfrey Show," to take his mind off the pressure he expects later that night.

Some people got it all wrong when it comes to Missouri. Missouri, picked to finish fifth in the North Division, is sitting at No. 24 in the polls.

Oops. Forget about rebuilding, Missouri appears to have reloaded. The 24th-ranked Tigers take a 4-0 record into Thursday night's home game against No. 21 Nebraska (3-1). The showdown is the conference opener for both teams and ultimately could impact — perhaps decide — the North Division race.

Missouri is still looking to jump start their running game.

"We need to get D-Wash running down the field a little bit more," Perry said of starting tailback Derrick Washington. "In any offense, if you run the ball, it keeps the defense honest."

In its 4-0 start, No. 24 Mizzou hasn’t needed to keep a defense honest more that it will against the one led by Nebraska defensive tackle Ndamukong Suh.

Dan Hawkins plans to help out his son.

Speaking Tuesday during his weekly media luncheon, Colorado coach Dan Hawkins said the offensive staff "has a bead on some things" that should help junior quarterback Cody Hawkins minimize his mistakes as the team prepares for Saturday's game at No. 2 Texas.

Cody ranks last among Big 12 starting quarterbacks in pass efficiency with a 104.2 rating.

"I think we're on to a few things and will try to clean up a few things here or there," Dan Hawkins said. "That involves a lot of different scope and sequence."

Mark Mangino is cool and collected.

Coaching on game day is all about making adjustments and not just schematically.

As do many successful football coaches, Mangino uses fear to motivate, but he’s more cerebral than emotional. His mind is more responsible than his mouth for the Jayhawks compiling a 24-6 record in the past 21⁄2 seasons.

The Kansas State quarterback job is still up for grabs.

However, Snyder said the job is still up for grabs between the 6-foot-1, 210-pound senior and Carson Coffman.

"That remains to be seen in regards to who will start the ball game," Snyder said during the teleconference on Monday.

MIke Leach has lots of reasons to like Steven Sheffield.

"I thought he did a great job with tempo,’’ Leach said during his weekly news conference. "Of our quarterbacks we have right now, he creates the best tempo for the group, and I think it’s something everybody feeds off of. He was a huge part of that, as far as everybody moving quickly together. He generates that better than anybody does.’’

Besides setting a tone, another bonus for Sheffield, Leach said, is no adjustments are required to the offense or play selection.

"Every team in the Big 12 has to measure itself against Oklahoma because they’ve won four of the last five Big 12 championships," said Briles at his Tuesday press conference. "They’re still a very good football team that’s played a tough nonconference schedule. They take a lot of pride in being a very solid team all the way around, and they’ve done it for a long time."

So what's new about that? The NCAA takes all the fun out of college football.

The SEC official who inadvertently helped an LSU comeback by flagging a Georgia player for excessive celebration is so sorry about the call that, according to his supervisor, "he's beating himself up," which is entirely unnecessary. Any number of Georgia fans would gladly oblige him.

Now don't get me wrong. I'm not advocating violence. It's an oath you're required to take when writing about the Big 12, a kinder, gentler conference.

Example: If one of his Longhorns looks like he's about to go T.O. in an end zone, Mack Brown has told his players to run down and hug the offender.

The American Football Coaches Association feels that there is a good reason not to celebrate.

Like a lot of things in life, college football's excessive celebration rule was instituted with the best of intentions.

Back in the 1990s, people who cared about the integrity of the game -- like Georgia's Vince Dooley and Grant Teaff, the former Baylor coach now the executive director of the American Football Coaches Association (AFCA) -- were concerned that the college game was trending toward the NFL when it came to player behavior.

"We saw too much 'me, me, me' in the pro game and the college game was headed in that direction," Dooley said. "We felt we had to do something." 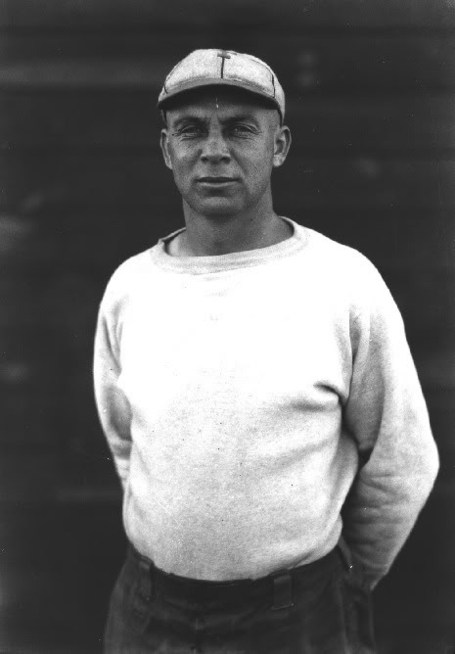 Today is the birthday of Dana Bible, the coach that the Aggies and the Longhorns share. Bible started the Twelfth Man Tradition at A&M. He is remembered at Texas for rebuilding the football program, innovative thinking about recruiting and helping players pay for their education. He was a member of the College Football Hall of Fame.

Upon his arrival at UT the coach initiated the "Bible Plan" to rebuild and sustain the football team. The plan had two parts. First, Bible and his coaching staff divided the state into fifteen recruitment districts; prominent UT alumni in each district played a major role in persuading high school players to go to Austin. Bible believed that native Texans would play harder for the school than players from out of state. Alumni were crucial to the second part of the Bible Plan, as well. The coach devised an innovative scholarship and financial-aid program to assist players in getting their education. For those players who demonstrated a need, campus jobs were provided during the long term and in the summer; alumni supplied jobs, and a portion of the players' wages were dedicated to tuition and fees for the following year.

In five seasons Bible took the Longhorns from last place to first place in the Southwest Conference. His team also won the SWC title in 1943 and 1945.