Share All sharing options for: Pre-Game Musings: Colorado at Texas

How bad are the Buffs? Colorado is better than a bread box but worse than Toledo. The quantitative translation according to Vegas: the Longhorns open as 32 point favorites. Other signs Dan Hawkins is running an intramural squad:

1Though I have in the past spoken with Mr. Plati, and like and respect him, this seems to me incredibly myopic and not in the university's best long-term interests. I'll withhold a full expose on the topic for another time and place. (Perhaps here?)

Looking ahead? It being certain that Colorado is a bad football team (and that my saying so is just the latest manifestation of SHORTHORN ARROGANCE), one might be tempted to argue that Mack Brown should approach the game conservatively, both to "save" our best looks for Oklahoma and minimize the risk of injury to key players. It's not an unreasonable thought, but for several reasons I think it's the wrong one.

For starters, with Texas coming off a bye week the Buffaloes offer 60 minutes of live competition to return to form. You can practice a hundred hours a week, but it's a fundamentally different exercise than live competition. The last thing Texas needs in the Cotton Bowl is to take a quarter or half to get going because players were trying to "flip on the switch" after going through the motions against Colorado. As Coach Hawkins is fond of saying: "He who kills the rodent today, bags the snake tomorrow." Or maybe that was Joe Kines. I forget.

Second, surprising the enemy on the football field is not like surprising the enemy on the battlefield. The only thing stupider than waiting to unload all your best stuff against your stiffest challenger is waiting to unload your best stuff after you've lost again to Oklahoma. Those days are thankfully behind us, and while the coaches will surely have a few wrinkles to add for Oklahoma, the RRS won't be a 60 minute series of Gotcha! moments. As always, it will be about well-coordinated series of plays, executed well. Give Oklahoma's defense a lot to process; the only times Brent Venables units dominate is when they can just out-athlete inferior competition.

And finally, there's no reason to believe you can tip-toe your way around injuries. A guy will either be in the wrong place at the wrong time, or he won't, and Lady Luck is indiscriminate about when and where she appears. 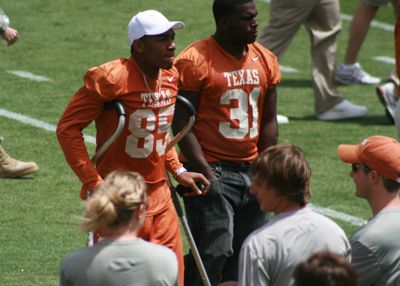 "I think you mean an indiscriminate BITCH!"

Opportunities knock. Not only would it hurt Texas to wait a week to fire the jets again, it would be a waste. As dominant as the team oftentimes has looked, few would say this group is running at max capacity. To name a few opportunities available on Saturday: