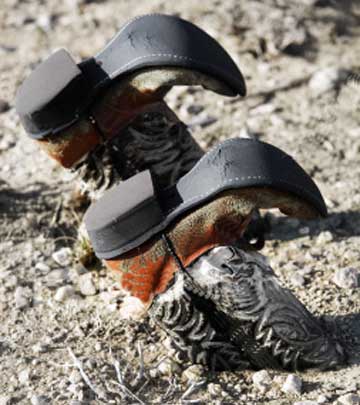 There is winning and there is misery. - Bill Parcels

Welcome to Stillwater. We were all over the Cowboys.

I'm not saying this is a cow town, but you do drive over Cow Creek on Oklahoma Highway 51 as you hit the outskirts.

So it's fitting that out here on the prairie, half the debate about the BCS National Championship Game became a moo-t point Saturday night. Stillwater is a long way from anywhere, but it suddenly seems like a straight shot from here to Southern California.

After demolishing overmatched Oklahoma State 41-14, the Texas Longhorns are going to the BCS title game in Pasadena, returning to the site of their last national title. Send Bevo to Rodeo Drive once again.

We are all a little tired of the dramatic comeback.The Longhorns didn't need any drama this year.

This time, there was the combination of Colt McCoy superiority, outstanding Texas pass defense and Oklahoma State self-destruction.

The result, to the dismay of most of an OSU school-record crowd of 58,516 at Boone Pickens Stadium, was a blowout victory for the third-ranked Longhorns.

The memories of Texas’ only 2008 loss were never far away for Curtis Brown, Blake Gideon and Earl Thomas.

A nightmarish ending in that Longhorns’ loss at Texas Tech boiled down to two plays that group didn’t make. Gideon dropped a chance at a game-sealing interception with a celebrated drop on the next-to-last Tech offensive snap on a throw by Graham Harrell. And Michael Crabtree split Brown and Thomas on his game-winning touchdown grab on the next play.

Except this time around, the trio of Texas defensive backs slayed those memories with a masterful defensive game. All of them produced interceptions in a convincing 41-14 victory over Oklahoma State.

And one last article with bad Halloween references.

The environment was hostile, scary even, given all the orange-and-black clad fans celebrating Halloween in the stands of Boone Pickens Stadium.

Everyone was there to see whether Oklahoma State finally could purge itself of its Texas curse and knock the Longhorns from their perch as the top team in the Big 12 Conference.

Instead, Texas, looking to keep itself in the center of the national championship race, continued to plague the Cowboys for the 12th straight year.

Love that attitude. We cannot say enough about our defensive line and secondary.

Nothing is good enough.

Nobody should be satisfied.

Not even after a 41-14 domination of Oklahoma State, in which the UT defense scored as many points as the No. 14 Cowboys' offense and the Longhorns forced five turnovers.

How good was the defense Saturday?

"I don't know," Houston said. "Sometimes it feels good, but I feel like we could do a lot better than we did out there today."

So just how good is Texas?

Here's how good the Longhorns are now: Texas is one of the few teams in college football that can run up the score ... while it's on defense.

Will Muschamp's greedy bunch scored on two of its four interception returns and forced five turnovers in a six-possession span to underscore a 41-14 rout of 13th-ranked Oklahoma State, a game as close as your average North Korean election.

About the only one who didn't pick off an OSU pass was Muschamp, but the defensive coordinator cracked, "They didn't throw one my way."

Colt McCoy does not want to talk about the Heisman.

McCoy doesn't want to talk about the Heisman. But he has another month to build his résumé and his numbers. And he can let everyone else talk for him.

The Horns aren't leaving anything to chance.

Coming into the year, the Longhorns faced three overriding questions about their national championship credentials: a) Could they find a steady back to take the pressure off quarterback Colt McCoy in the running game? b) Could they improve against the pass after giving up 30-plus points three times and finishing 51st nationally in total defense? And c) Could they demonstrate the intangible combination of "killer instinct" and consistency to run the table after enduring costly November upsets three years in a row? Two-thirds of the way through the campaign, they've emphatically answered two of those questions in the affirmative, and any concerns about the McCoy-centric running game remain, for all intents and purposes, apparently irrelevant.

"We can get so much better than this team has played," he said, making a reporter wonder out loud if that might scare a lot of people.

Forget about it, Iowa. Saturday ended all those other teams' hopes of making the BCS title game.

Iowa came from behind, exploded in the fourth and got past Indiana early Saturday while Cincinnati was its usual steady self in a victory at Syracuse. Meantime, Boise State won again to remain undefeated, just like TCU. And so it must've been frustrating for fans of those schools to settle in and watch their hopes of sneaking into the BCS National Championship Game take a huge hit Saturday night here at the palace T. Boone Pickens created.

Because that's what happened.

Only the Aggies can keep us from Pasadena.

If it's possible, Texas is making a run for a national title look boring. That's not a rip.

The Big 12 is so bad, and Texas is starting to execute so well, that getting to the BCS Championship has been nothing more than a coldly methodical exercise.

This is a team that's playing up to its talent level on defense, and hitting its stride on offense, and there's nothing anyone can do about it over the final few games on the slate and in the Big 12 title game.

We are in great shape for the BCS title game.

Oops. It is easy to get them confused... 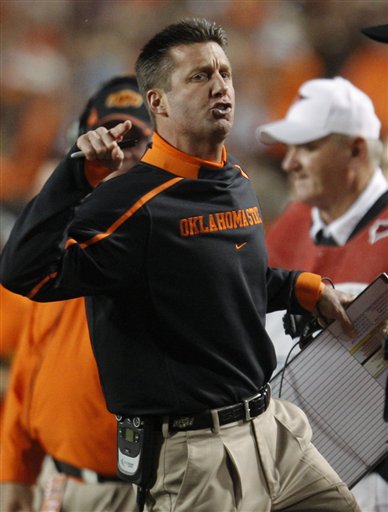 The Pokes had a tough night.

Another haunting for the Pokes.

Even the eyeballs popping out of masks intently scoured the field for the ghosts and goblins that so often shake the Cowboys when they share a gridiron with Texas.

Sure enough, here came another horror show for Oklahoma State football, only with a twist. No four-quarter avalanche. No witches’ brew of an epic comeback.

Just the haunting feeling of what might have been.

That fumble that wasn't actually a fumble changed everything.

Andre Sexton leaped around with joy and jubilation, full of excitement after making what he thought was a key fumble recovery in Oklahoma State’s Big 12 battle with Texas on Saturday night.

Then OSU’s senior linebacker looked at the official, and a general feeling of disbelief flowed throughout his body as Sexton realized the Longhorns would keep the ball.

The Poke receivers had a rough night.

Racked up receptions and touchdowns, ripping through and over Grambling State, Texas A&M, Missouri and Baylor.

Teams that won't remind anyone of Texas.

And on the grand stage Saturday night, a final proving ground for the receivers, no one in orange reminded anyone of Bryant.

A game that held so much promise ended with a thud, a 41-14 loss to Texas. This was a high-stakes contest against a top-caliber opponent. This was a night that OSU needed its stars to shine brightest.

Robinson knew it, too.

"I felt like I would have to play almost a perfect game, run around and make plays," he said.

Robinson needed to be great.

He was anything but.

So long, Pokes. See you next year.