Snap Shots: Abject Stupidity, aka I-Formation From the One, Redux

Share All sharing options for: Snap Shots: Abject Stupidity, aka I-Formation From the One, Redux

The only poor kickoff coverage of the day by Texas resulted in a 27-yard return out to the UCF 46 yardline, giving the Knights excellent field position. Though they were able to pick up a rare first down on an offsides penalty by Ben Alexander following a nine-yard run by Johnathan Davis, Texas forced a punt after a Lamarr Houston sack on third down. On the first play of the fourth quarter, UCF punter Blake Clingan kicked a 50-yard punt downed by the punt coverage unit at the Texas one yardline. Texas starts their possesion after marching 87 yards on 15 plays their previous possesion, culminating in the touchdown pass to James Kirkendoll after holding the ball for over six minutes. 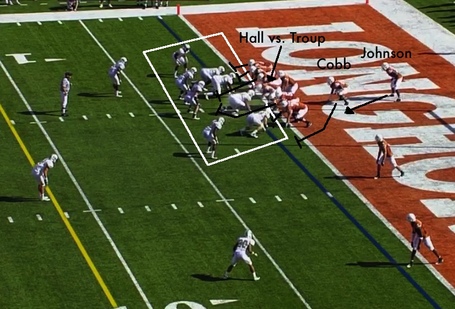 There are several important things to point out on this play. One, there are eight UCF defenders in the box, as they correctly expect Texas to run out of the rarely-used I formation. Second, the tight end is on the right side of the Texas line of scrimmage, the stronger side of the Longhorn line behind which they prefer to run. Predictably, the Knights shade their defense to that side of the field, with the middle and outside linebackers taking the A and C gaps on that side of the field, respectively, with the cornerback providing outside leverage and a safety also providing run support on that side of the formation. Third, notice that UCF defensive tackle Torrell Troup, an excellent player in his own right and one of the better defensive tackles Texas will face all season, is lined up over the left shoulder of Chris Hall, while the left guard, Charlie Tanner, is uncovered, giving him no one to block at the line of scrimmage. Lastly, there is also the fact that Johnson is closer to the back of the end zone than the front, as I-formation plays leave the tailback seven yards from the line of scrimmage. 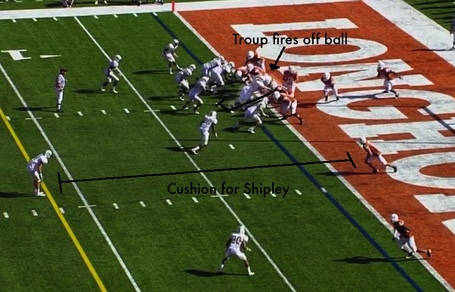 Let's play a fun game -- it's called "Watch How Far Torrell Troup Can Push Chris Hall Into the Backfield!" Okay, maybe this game isn't so fun for Texas fans, but we're going to play it anyway, dammit. The compact Troup fires off the ball with excellent leverage, getting under the pads of the Texas center, who receives no help from Tanner, headed for the Mike backer. Chris Hall is currently more than a yard behind the line of scrimmage. Notice also that if the Longhorns had run a bootleg, the safety, a converted quarterback, is giving Jordan Shipley 12 yards of cushion. 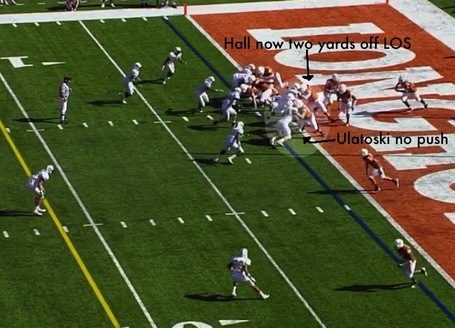 Chris Hall is now two yards behind the line of scrimmage and comes fairly close to stepping on the foot of Colt McCoy leaving center -- not an entirely uncommon occurrence when a center gets so completely blown up at the snap of the football. Notice also that Ulatoski has just engaged the defensive end and is getting no push. 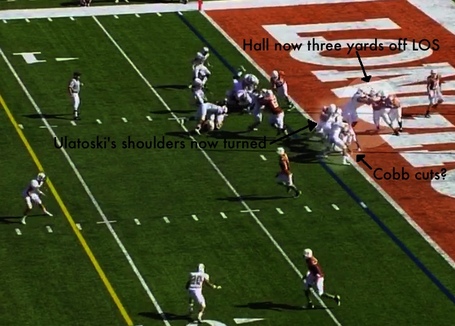 Returning to our fun little game, Chris Hall is now at least three yards behind the line of scrimmage -- that's nine feet. He's not exactly on the line of scrimmage when he hikes the ball, so it's really only fair to point out that Troup has only moved him six to seven feet backwards. See, it's really not so bad is it? Well, except for the fact that Hall has been pushed almost into Johnson shortly after his receives the football, slowing the big backs momentum and disrupting what little timing still exists with the play.

Notice also that Ulatoski has his shoulders turned, which would be fine if there was still a running lane through the four hole, but since Hall got pushed so far back, there isn't. Notice as well that Cobb doesn't really have an idea of what he's trying to do to the playside linebacker -- he's sort of cutting the guy, but doesn't leave his feet, but also doesn't really block the guy, as his left arm is just kind of dangling by his side, unused for, you know, actually blocking the guy. In fairness to Cobb, his day was otherwise, most notably including his two special teams tackles and a crunching block on Johnson's touchdown run over the left side of the line from the Jumbo package. 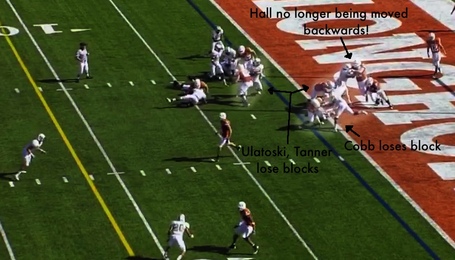 Chaos time! The chaos has officially begun on this play, as happens on so many plays when the timing gets off because one player is beat badly at the line of scrimmage. Even though Hall fights back against Troup enough to arrest his backwards movement, it's too late. Cobb, who decided not to use his hands to block the playside linebacker, loses his block, getting shed by the linebacker -- no surprise, since the linebacker didn't even really have to disengage to do so. Ulatoski, who failed to get any push on the playside defensive end, loses his block. Tanner, being Charlie Tanner, loses his block on the middle linebacker. 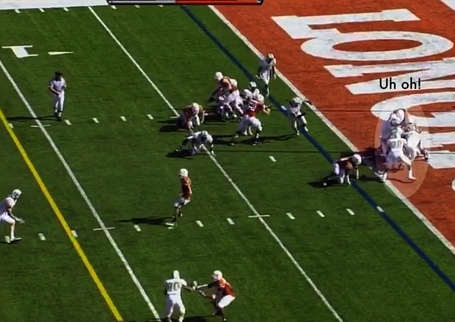 At this point, it's one on three -- Johnson must fight through the three UCF defenders to pick up a litle more than a yard to get the ball out of the end zone. 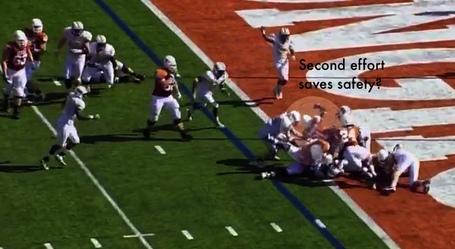 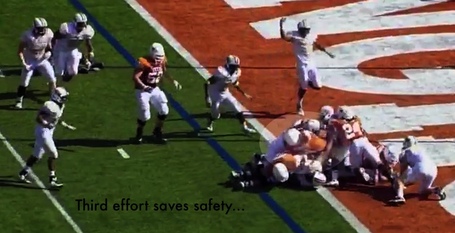 Fortunately for Texas, Johnson keeps on fighting, barely getting the ball out of the end zone with his third, and possibly fourth, effort.

Um, haven't we all seen this movie before? The Longhorns get pinned near the goalline, go I formation, obviously a running package...Chris Hall gets blown up after snapping the ball...The Texas running back receives first contact deep in the goalline...Sounds like the Tech game last year doesn't it? Same situation, almost the same result, except this time the coaches manage to brilliantly avoid putting an injured running back in the backfield, instead using the biggest back they have. Credit them for that, at least.

Greg Davis indicated after the game that the Longhorns did receive the look they wanted as well, with UCF overloading the left side of the line, leaving the Longhorns evenly matched up on the other side. The only problem is that UCF overloaded the other side of the line because the left side does a poor job of getting push on running plays, particularly Ulatoski, who remains much stronger in pass protection than actually moving defenders backwards.

The real problem here is that the coaches didn't learn from their mistakes last season and failed to understand that another I-formation running play was vritually doomed to failure. Mack Brown indicated that the coaches have, after one safety and another near safety, finally learned their lesson:

The one that was ugly coming off the goal line that Cody saved us otherwise it would have been a safety was missed assignments up front.

So we didn't block it right and Greg and I have talked about it, we're foolish from the 6-inch line to take the ball and hand it to a tailback seven yards deep. That's just foolish.

It happened to us at Tech, and we're going to change that. So that's more on us as coaches than on the kids. I thought it was just not smart and we've got some different things we can do.

Obviously, that ends up being a 99-yard touchdown drive. It ended up being effective. But if they are going to wad em all up and we're going to line up a tailback seven yards deep in the backfield, let's learn from it and move forward. That's on us as coaches, even though there was a missed assignment.

Yes, Mack -- foolish, stupid, dumb, and idiotic are all apt descriptions of the play call. Davis, however, has a slightly different perspective on whether or not there was a missed assignment on the play:

We had a missed call on the first play that Cody did such a great job. We got the look we thought we'd get.

The guard (Charlie Tanner) had an option to bang what we call Lock It, and we didn't make that call, which left Chris Hall in a one-on-one situation, and Chris did a pretty good job of maintaining.

And if we weren't on the minus-1 yard line, Cody probably would have taken it back door. But because of where we were at, he just went front side.

The missed call probably falls on Hall himself, as the center is normally responsible for making the line calls. So the responsibility falls both on the coaches were putting the players in a bad position, and on the players for not making the proper call at the line and for failing to execute, as three players essentially missed their blocks, leading to Johnson having to fight through three defenders

The play illustrates the individual breakdown(s) that have occurred all too frequently this season along the offensive line. When it's not Hall, it's Tanner. When it's not Tanner, it's Michael Huey or David Snow. When it's not Huey or Tanner, it's Ulatoski. No player has been immune from significant individual failures at different times. The play also illustrates the major problem with man blocking -- it allows one-on-one that can lead to penetration and highlight individual failures in a manner that zone blocking covers up to some extent. Of course, had the right call been made and Tanner had double teamed Troup with Hall, the play would have had a much better chance for success.

The final point worth making here is that Texas is better served by play-action passing in those situations than running out of the I. Lining up four wide isn't a good idea either, so the compromise here is probably 11 personnel, running play action, and moving the pocket, as the Longhorns did on the following two plays, resulting in a big third-down conversion on a pass to Malcolm Williams.