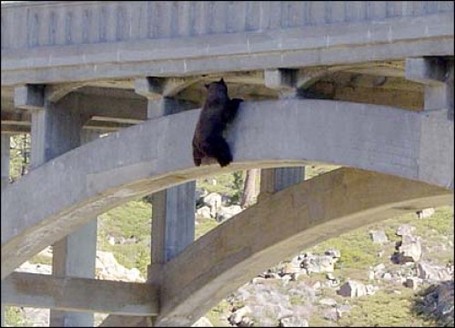 Bears are just dumb. The fans aren't much better.

Mack Brown isn't expecting the Bear faithful to pack the stadium. An omen?

The Bears are getting their act together just for the Longhorns.

Baylor players and coaches believe becoming bowl eligible is possible, regardless of what the critics say.

"But outside our locker room, outside of this building, a lot of people are maybe kind of writing us off. But if we take care of our business, then we can make something special happen."

More on the Bears' plans to knock off the Longhorns.

Nick Florence is growing up right before our eyes.

The Bears have a little bit to smile about with the way Nick Florence played against Missouri last week. It's not like coach Art Briles expected much from his least experienced quarterback after starter Robert Griffin — last season's Big 12 freshman of the year — went down with a knee injury in the Sept. 26 game win over Northwestern State.

"Obviously when the starting quarterback goes down, there aren't good thoughts,'' Florence said. "He was leading our team and was doing a great job. After he got hurt, he came back and led us to the win, but when we later found out he was out, I was wondering if this was really happening. From that point, it was time to step up."

"He's just freakishly fast," Lake said of the Bears' inside receiver. "From start to stop, faster than anyone I've ever played against before or ever seen.

"He's a great athlete, great hands. He's a small guy, but he's fearless going over the middle. He's just got rubber legs. It's not even fair."

Wright, who celebrated his 20th birthday Thursday, also is a multi-talented athlete with a 45-inch vertical leap.

The Bears are a little shorthanded this season.

These aren’t your father’s Bears. They’re probably not your older brother’s, either.

Come to think of it, they might not even be head coach Art Briles’. There’s so little left of the Baylor team from the one that started the season with so much promise, that they’re hard to recognize.

Colt McCoy: The beginning. He will tie another record this Saturday.

Mack Brown relies on the seniors for leadership and motivation.

Coach Mack Brown sets the agenda for his Texas players at the team meeting each Sunday.

Then he gives his seniors the final word.

More and more this season, that group has taken advantage of the opportunity. The handful or so who speak after Brown have become more vocal and assertive the closer Texas has come to a possible trip to the BCS title game.

"The senior leadership is made up of guys who are really invested in this deal, and it means a great deal to them," receiver Jordan Shipley said.

They actually tailgate in Waco?

The Big 12 is just one slippery slope of fail.

Texas fell one spot behind Alabama in this week's Bowl Championship Series standings, and the Big 12 dropped a notch in this week's conference rankings, too.

There's really no way to sugarcoat it: The Big 12 isn't that deep (or good) this season, outside of the Longhorns and possibly Oklahoma State.

SI's Stewart Mandel thinks we have it way too easy down here in Texas.

This year's national title race has been, to put it bluntly -- boring. Something feels missing, in spite of the fact six undefeated teams remain in play at such a late point in the year. That something: "big games." Florida and Alabama remain on course for an epic season-ending showdown, but to this point each has played just one conference foe (LSU) currently ranked in the BCS Top 25. The Tide, to their credit, also played Virginia Tech. However, two weeks from now, during what should be the season's "stretch run," the Gators will host Florida International, while Alabama will play Chattanooga. Yawn.

Yet those two have nothing on Texas.

We told everyone that the Big 12 played defense. They just had to wait to see the unveiling this season.

As for offense, eight Big 12 teams averaged more than 400 yards last season when league rivals feebly swatted for cloth without realizing they were playing tackle, not flag. OU and Texas Tech even averaged 500-plus yards. This season, three teams are in the 400-yard range in conference play.

Defense is stronger, no doubt. Unless Texas collapses against a weaker opponent down the stretch, the unit Muschamp commands will put the Longhorns in the national championship game as much as Colt McCoy-to-Jordan Shipley.

Resistance is trendy elsewhere, too. Nebraska proved it last week when it out-stiffened Oklahoma by the throwback count of 10-3.

Mr. Suh may sound like a character on Hawaii 5-0, or the bad guy on Green Hornet, but his household name could grow tiresome Saturday as he lines up against redshirt freshman Trevor Marrongelli of Kansas.

And speaking of Sooners... Remember the name Gordon Riese? Ask a Sooner. I bet they do.