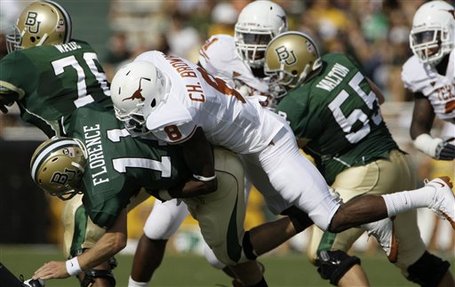 Playing before a crowd of 44,372 saturated by Texas fans, the No. 2 Longhorns made themselves at home and ran Baylor out of its own stadium.

With Colt McCoy pushing the offense and Texas’ defense smothering the Bears, the Longhorns looked like a team on a mission to get to the BCS championship game.

Their 47-14 win over the Bears was even more dominating than it looked.

It was 40-0 by halftime, and the only suspense remaining was whether all the Texas fans would create a traffic jam getting out of the parking lot.

Just taking it one game at a time.

Texas had just won its 10th straight game Saturday afternoon, and Mack Brown was making his way back to the locker room when a fan leaned over the railing and yelled something that caught his ear.

"Just four more," he called out.

"No, it's really one more," Brown told the fan.

It is just becoming routine.

Another week, another dominant defensive effort.

This is becoming routine for Texas coach Mack Brown's bunch.

Or make that Will Muschamp's bunch.

"If it was up to Muschamp, we couldn't even walk to meetings," Kindle said. "He would always run us to meetings if he could. That's his thing. He likes up-tempo defenses because a lot of the teams in the Big 12 have up-tempo offenses.

"A lot of speed out there. He wants guys on the field who not only can run but are physical and knowledgeable of defensive schemes."

Picking on Aaron Williams is not a good idea.

If the Baylor Bears were trying to pick on Aaron Williams, their approach was all wrong.

Having driven almost the length of the field and looking poised to set the early tone for an upset Saturday at Floyd Casey Stadium, the Bears decided their best chance at reaching the end zone was by attacking Texas' sophomore defensive back.

But not only had Williams wanted this to happen, he said he'd prayed for it. So when Baylor quarterback Nick Florence followed one incomplete slant pass in Williams' direction with a fade thrown over his head, it was as if the Bears had fallen right into his trap.

"Once the ball was up there," Williams said, "I said I better go get it."

Greg Davis and Will Muschamp break down the offense and defense, respectively.

Thanks, Dennis. Dennis Dodd has UT No. 1 in his poll. 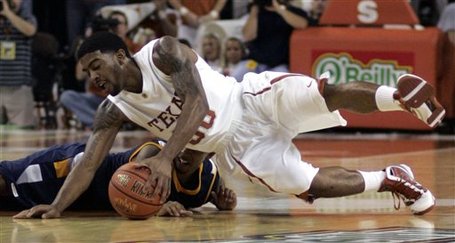 When the freshmen looked nervous, No. 3 Texas had the luxury of a strong senior class to take control and lead the way.

Texas shot 57 percent for the game and outrebounded UC-Irvine 49-30.

This team is all about the seniors.

And, very simply, this team belongs to the seniors -- James, Pittman and Justin Mason.

They proved it in the first half, as the Longhorns held UC Irvine to only one field goal over the final 10 minutes to overcome an early deficit with a 24-2 run. James and Pittman combined for 13 points and eight rebounds during that surge, and Mason supplied his characteristic defensive intensity.

This is a problem a lot of teams would like to have. The biggest challenge this season?

"The challenge really will be, ‘How do we bring it all together?' " Barnes said.

Five interceptions one week. Five touchdowns the next. Such is life as a freshman quarterback for Oklahoma's Landry Jones.

A week after Oklahoma failed to reach the end zone for the first time in Bob Stoops' 11 seasons as coach, the scores came in bunches for the Sooners - and particularly for Jones, who passed for a career-high 392 yards and five touchdowns as Oklahoma became bowl-eligible with a 65-10 rout of Texas A&M on Saturday night.

"You have to be sure of yourself," Stoops said. "I think the more he played, the more comfortable he got and he started making the throws we know he can make."

Texas A&M defensive end/linebacker Von Miller, the nation's sack leader with 15.5 sacks, never got to Oklahoma's quarterback on Saturday, but he didn't get to much of anything in the Aggie loss.

Miller, who entered the game with 39 tackles, finished with just one assisted tackle.

The meltdown is commencing in College Station. From Texags:

With all the sip hysteria about Muschamp, I wonder if their big donors might make overtures to nudge Mack out to usher in the new era. I could see Mack being pissed and he aint hurting for $ so perhaps out of bitterness and to avenge his treatment he might take one of those $1 a year salaries to come to A & M which would address our financial constraints.

Think about it, the situation has some similarities to the Bret Favre/Aaron Rodgers deal in Green Bay. The Packers hoped it would end peacefully and Favre would just go away but he came back to F with them. As much as I've disliked Mack Brown in the past, he is a competitive SOB and he isn't going to appreciate being pushed out. It's like Rocky V, the young upstart always gets too big headed and ends up needing a beatdown by his teacher.

As a bonus, Mack could bring some of those recruits right over with him and maybe even receive some transfers over from tu of the kids he has good relationships with. For instance, that Aaron Williams DB is a true sophomore so he could use his redshirt year as a transfer year and still have 2 years to play. Nothing would make me F'ing happier than shutting up my sip friends by taking some of their young players they go on and on about.

I know some will disregard this idea but if you really think about it, it isn't that far fetched. It makes a hell of a lot more sense than somehow coming up with 5 million a year for Muschamp and could get us fast tracked back to the top.

I Am The 12th Man doesn't think the Aggies can handle adversity.

YUMC, where are you? We would love to hear your thoughts on the game in Norman.

The North is heading for a showdown.

Kansas State lost to Missouri 38-12. The Wildcats' offense was boring.

What won Kansas State six games this season cost it the game Saturday against Missouri. It sounds far-fetched, yes, considering the Wildcats lost by 26 points. But it's the reality.

Call it whatever you want: Boring, vanilla, conservative — that's what the K-State offense was against the Tigers. Missouri stacked the box with eight defenders throughout most of the game with the hope of shutting down K-State's powerful rushing attack.

A writer from Sports Illustrated happened to attend the Tiger's game and he believes he has seen the best player in the country.

Nebraska beat Kansas 31-17 and they are on their way to the North showdown with Kansas State.

Nebraska earned its dinner with a hard-fought 31-17 triumph against Kansas. It was a meal fit for kings — kings of the Big 12 North Division, warts and all.

Oh, I know. A formality remains. Nebraska still must defeat Kansas State next Saturday to make it official. The Wildcats are a "rag-tag bunch," according to coach Bill Snyder. But they’re scrappy and generally play intelligently. They’ll put up a decent fight but most likely come up short against a Husker outfit making an impressive late-season surge for the second straight year.

"I think (we) did a pretty good job," KU coach Mark Mangino said of the team’s performance against Suh. "He wasn’t as big a factor as he’s been in other games. He’s an awfully good player. We just tried to neutralize him a little bit and tried not to let him dominate the line of scrimmage."

The Cornhuskers are now No. 25 in the AP rankings.

Someone actually cares what happens in the North division. The Nebraska-Kansas State game will be on ESPN Saturday night.

It was just a typical day for Buff football. Iowa State beat Colorado 17-10.

The signs are all there and they`re pointing toward a coaching change at Colorado.

The fans are in meltdown mode on message boards, story commenting and anywhere else they can share their voices, knowing the Buffs will be home for the bowl season for the third time in four years.

Another sloppy effort on the road at Iowa State ended in a 17-10 defeat and wiped out wishes for the first winning season under the fourth-year coach. It also ended hopes for a Big 12 North Division title on a day when division leader Kansas State lost, just as the Buffs needed it to.

Oklahoma State beat Tech 24-17. Zac Robinson left the game with a concussion from a shoulder-to-helmet hit from Tech's Jamar Wall.

Warm thoughts, wishes and a get-well-soon go out to Robinson, who probably isn't feeling too well.

Who will go bowling this year? Tim Griffin has the bowl picture for the conference.

You really can blame this on the refs. Oklahoma State's game was delayed because the refs did not show up. 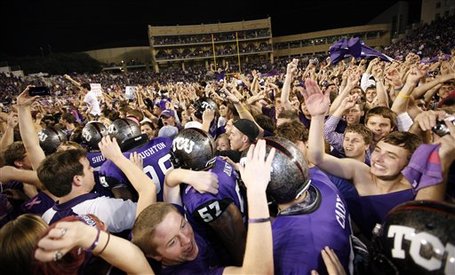 We all want a Ferrari for Christmas, but that's not happening, either. TCU beat Utah and they want a shot at the BCS title.

TCU believes they have a lot in common with their neighbors down IH-35.

So how does your team match up with those teams in front of you, coach Patterson?

"You're not going to get me into that one. We may end up having to play one of them, so I will leave it at that."