Anatomy of Momentum: Scoring After the Fourth-Down Stop

Share All sharing options for: Anatomy of Momentum: Scoring After the Fourth-Down Stop

Will Muschamp talks a lot about his defense responding to sudden-change situations, calling his players "firemen" when coming onto the field after an offensive turnover. For the offense, the idea is similar, though instead of stopping the opposing team from generating momentum by scoring after a sudden change, the offense intends to consolidate momentum established by the defense with a turnover or a fourth-down stop.

Taking a calculated risk on his own 44 yardline, Art Briles went for it on fourth down on Bayor's second possession, hoping to establish some momentum for the Bears, down 7-0 10 minutes into the game. The Texas defense, having game-planned for the Baylor quick snap on fourth down -- they had seen it on film against Missouri -- did an excellent job of stopping the quarterback sneak, with the defensive line winning the battle at the point of attack to allow Dustin Earnest, who played well replacing the injured Roddrick Muckelroy, to make the first-down saving tackle, giving Texas the ball at the Baylor 44, seeking to consolidate momentum. 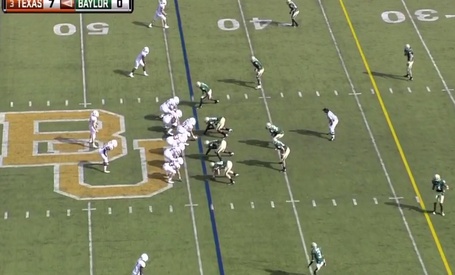 Texas lines up in 11 personnel, with EBS on the right side of the line and Cody Johnson on the right side of Colt McCoy. John Chiles is the split end, while James Kirkendoll and Jordan Shipley are at the top of the screen at the slot and flanker positions, respectively. Baylor has two deep safeties, three down linemen, three linebackers, and five defensive backs on the field. Since the Bears are worried about not giving up deep passes, Texas has favorable conditions to run the ball. 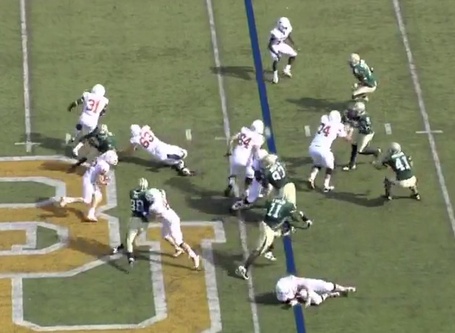 Greg Davis dusts off the counter read play that was the staple of the now-defunct WildHorn formation. Once again, the strange thing about this play is that the pulling guard, in this case Michael Huey, seen on the ground here, tries to block the read man, the linebacker standing on the left side of the Texas line. McCoy pulls the ball, as the read man gets upfield and Huey tries to block him instead of leading into the hole, where Adam Ulatoski and the pulling tackle, Kyle Hix, both get their blocks. Once again, the pulling guard tries to block the read man -- the guy optioned off on the play, the point of option football. The end result is that the backside linebacker Joe Pawelek, who could have been blocked by Huey had he led into the hole, ends up making the stop for a two-yard gain.

There's no misdirection in the play, so the offense must account for the backside linebacker, but fails to do so because of the strange obsession with blocking a player already eliminated from the play. Add to it the fact that since Texas started using his play, the pulling player has never sucessfully blocked the read man and it just doesn't make any sense to design the play that way -- Texas might as well just take an offensive lineman off the field, because the scheme effectively eliminates them from having any chance at success. 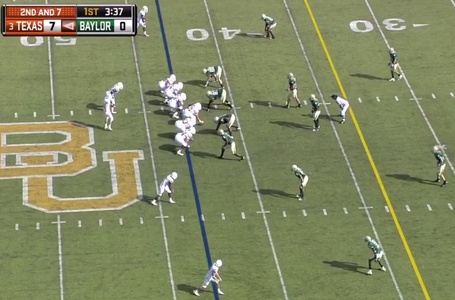 Texas stays in their 11 personnel look, with Kirkendoll and Shipley now at the bottom of the screen and EBS on the left side of the line, with Johnson moving to the left side of McCoy. Notice that Baylor stays in the same defensive look, with two safeties deep and big cushions on the Texas receivers, as well as three down linemen and three linebackers. 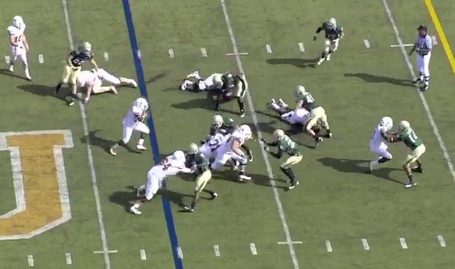 Texas runs at the weak side of the Baylor line, where they have only a defensive tackle and a linebacker. It's the inside zone play and notice that Chris Hall moved the defensive tackle three yards off the line of scrimmage, but lost his balance and is now being shed by the defensive tackle, who will eventually make the play. Notice also that the play is pretty well blocked, except that Tray Allen, on the ground in front of the linebacker Pawelek, failed to execute his cut block in space. Johnson picks up three yards. 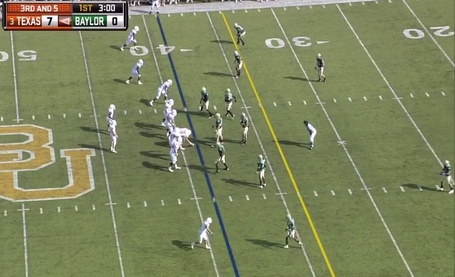 As has been the case for the last several weeks, Dan Buckner enters the game on obvious passing downs, coming in for EBS. Notice that Jordan Shipley is now at split end, with the Baylor defensive back coming up in press coverage. In their two-deep safety look, it appears that Baylor has bracket coverage on Shipley. 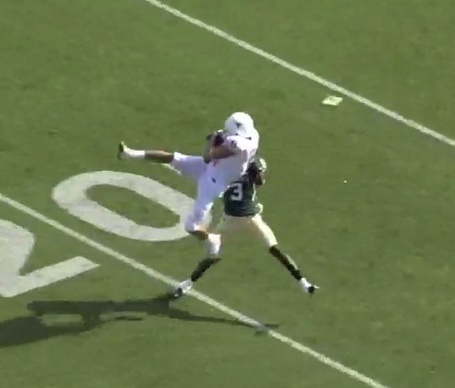 Actually, the Baylor cornerback is one-on-one with Shipley, as the left safety turns his shoulders to look inside at the snap -- a strange call by the Baylor defensive coordinator. Shipley beats the cornerback at the line of scrimmage and McCoy delivers a perfect strike to his long-time friend, giving him the opportunity to go up and get the football, which he does. The play goes for 21 yards and a first down. 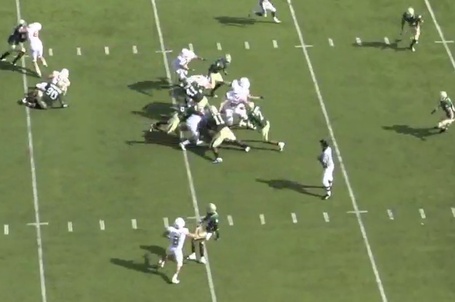 This is the only screenshot available, as FSN misses most of the play as the Longhorns go jet tempo. Texas did, however, appear to substitute, as that looks like EBS at the top left of the screen. It also looks like the Longhorns were man blocking on the play, as the offensive line moved the line of scrimmage about 4-5 yards downfield, allowing Johnson an easy gain of five yards on the play. 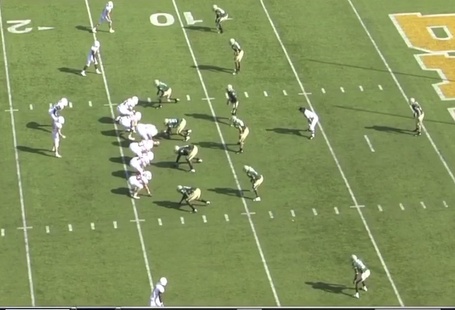 The Longhorns stay in 11 personnel, with EBS on the right side of the line and Shipley and Kirkendoll split wide at the top of the screen, with Chies at split end. Johnson is on the left side of McCoy. Baylor shifts out of their two-deep safety look for the first time on the drive, with a single-high safety on this play. The Bears do stay with their three-down look and a linebacker standing at the line of scrimmage, with either three other linebackers on the field or a safety lined up as a linebacker. 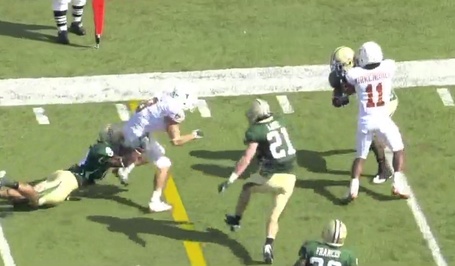 Given the nature of the Texas offense, it's highly possible, and in fact highly probable, that Texas comes to the line of scrimmage with a running play called. Since Baylor has seven men in the box, a look they haven't shown much in the early part of the game, McCoy probably checks into a quick throw outside, as there is no safety on the wide side of the field. The pass goes out to Shipley, who simply has to beat his man and receive a good block from Kirkendoll to pick up a nice gain. Shipley doesn't exactly beat his man, but gets by him enough to pick up seven yards. Much maligned for his blocking earlier in the season, Kirkendoll demonstrates the blocking effort that has helped him regain his starting role. 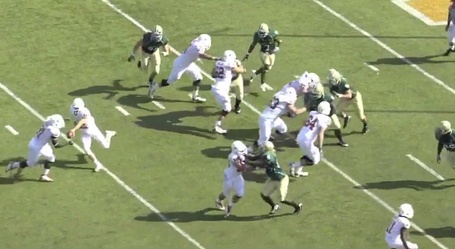 Once again, the Longhorns go jet tempo and under center, while the FSN production crew misses the start of the play. It's the inside zone play and Baylor doesn't look like they were able to get set particularly well. 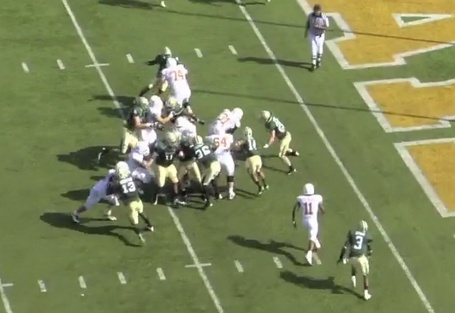 The Longhorn offensive line wins at the point of attack, as Hall does an excellent job of turning the shoulders of the defensive tackle in a combo block with Huey, then gets to the second level to block Pawelek. Johnson has a gaping hole to run through and simply has to knock Jordan Lake backwards, which he does, to find the end zone. Six yards on the touchdown run for Johnson and the Longhorns go up 14-0.

Six plays, 44 yards, 2:08 expired. McCoy completed two passes for 28 yards, both caught by Jordan Shipley, while picking up two yards on one carry. Three carries for 14 yards and a touchdown by Cody Johnson. Two good blocks by Hall and one good block on the perimeter by Kirkendoll.

The Longhorns did an excellent job of consolidating momentum by marching down the field after stopping the Bears on fourth down. At this point in the game, after scoring on two of their first three possessions and stopping Baylor twice, once at the goalline on the interception by Aaron Williams and the second time on the aforementioned fourth-down stop, any hope of springing an upset is essentially gone from minds of the Baylor team. In fact, Art Briles commented after the game that this group, being relatively young and inexperienced, just doesn't respond particularly well to adversity.

The offensive philosophy of Greg Davis was also apparent on this drive -- take what the defense gives you. Last week, Chip Brown and Sean Adams were discussing Davis on their radio show and Adams commented that all of the coaches he had played for generally tried to attack opponent weaknesses: any weak players, back ups who came in to replace injured starters, etc. Davis, however, places a higher value on letting the defense dictate where the ball should go, hence all the short passes out to wide receivers that operate as part of the running game. On this drive, Davis ran the ball some against the three down linemen of Baylor, but also took advantage of single coverage against Shipley to throw a pass farther down the field. The other pass on the drive was most likely a checkdown by McCoy once Baylor started to run the ball. Though the philosophy may let opponents dictate what the offense will do at times, this drive shows just how successful it can be to run the ball against weaker fronts and pass the ball against stronger fronts.

This drive also emphasized that the jet tempo offense, which generally features running plays from under center, has a place in the offense, as the touchdown appeared to catch Baylor before they were properly aligned and allowed some rare drive blocking on Johnson's second run. The Longhorns ran a bootleg pass and tried to throw a quick screen from the jet tempo offense, so Davis is also cognizant of breaking tendency at times to keep teams from teeing off on the run when Texas speeds it up and gets under center.