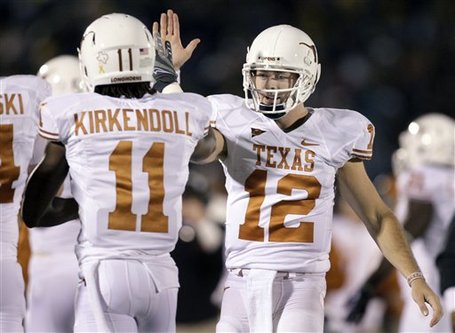 Colt McCoy is back in the spotlight again.

Colt McCoy, ever the team-first kind of player, finally has discovered a record he can set that totally involves his Longhorns.

"I want to win. That's a goal of every quarterback," McCoy said Monday.

And if he's victorious Saturday at home against Kansas — Texas is a prohibitive 28-point favorite — he'll break the career victories record for Division I-A quarterbacks.

If we lose one game, are we still going to Pasadena?

If Texas loses, it's out. No, a one-loss Longhorn team doesn't get the benefit of the doubt in a bad year for the Big 12. If Cincinnati runs the table, it's at the top of the pecking order with wins at Oregon State, Rutgers, and Pitt. When all is said and done, if UC runs the table, it'll likely have beaten seven bowl bound teams and two teams in Rutgers and Putt that will likely end up 10-2.

D.J. Monroe broke curfew. And then there is that sticky issue of a DWI.

What idiot asked this question?

Texas coach Mack Brown was asked Monday about the possibility of playing TCU and declined to deal in hypotheticals, saying his team was focused on Kansas. But he did have high praise for TCU coach Gary Patterson.

"Gary Patterson has done as good a job of coaching as anybody in the country," Brown said. "They do a tremendous job recruiting and they coach and they've been as consistent as anybody in America."

One more story about friendship and roommates.

McCoy and Shipley, who both use a Remington 270 rifle, use hunting as their respite from the rigors of class, practice, travel, games, etc. They'll take up positions in separate stands and hours will pass without a word spoken or a shot fired.

Well, it won't happen this Saturday. One more win and the Jayhawks are bowl eligible.

What about the first three? Kansas is focusing on the fourth quarter.

On the heels of a four-game stretch in which his team has reserved some of its worst play for the fourth quarter, Kansas University football coach Mark Mangino said Monday that the focus going forward will be making sure the Jayhawks figure out a way to buck their recent trend.

In the past four weeks, the Jayhawks have given up 53 points in the fourth quarter — while scoring just 17 — and wasted a number of promising opportunities in the process.

Mangino insisted he has not lost the support of his players but suggested that may not be true of others on campus.

"I haven't lost the team, not one bit. I may have lost some people around here but it's not players," he said at his weekly news conference.

Asked if Mangino had lost the support of his team, or at least parts of it, Reesing said emphatically, "No. Not at all."

The Kansas City paper is reporting that the problem started with an altercation with a player.

Kansas football coach Mark Mangino poked senior linebacker Arist Wright in the chest during a practice before a game at Colorado, triggering an athletic department investigation of Mangino. sources told The Star on Tuesday evening.

The Battle for the Bottom is on this Saturday. The Aggies play the Bears in College Station. The pressure is on because there are bowl implications for both teams. Art Briles:

"Yes it does take on more importance and thankfully so. I welcome the challenge of these bowl implications that are involved because that's why you play. I think if you asked me that and I said no, I wouldn't be honest, but it certainly does. It's always going to be a big game because it's in your state, a rivalry and they're 80 miles down the road. But you add a bowl game to it and it makes it even better."

The game has turned into a heated rivalry.

The two schools are separated by only 84 miles as the crow flies along Texas State Highway 6.

Baylor and Texas A&M have been longtime rivals, playing a 99-game series that predated their memberships in the Southwest Conference. Both joined the Big 12 together in the continuation of a bitter rivalry that has been played yearly since 1945.

It may not seem as heated now as in the past when Grant Teaff squared off with Jackie Sherrill or later, R.C. Slocum. Even the Guy Morriss-Dennis Franchione rivalry developed into a good one with some barbs thrown from both sides on both sides.

Tech is still a little upset about that loss to OU last season.

"The thing I remember the most about that game is when the Kris Kross song 'Jump' came on, there were 80-year-old women getting out of their wheelchairs and jumping up and down," Tech offensive tackle Marlon Winn said. "The whole stadium was jumping up and down, and it was just demoralizing. ... That just always sticks with me, so in practice this week I'm working to get that taste out of my mouth."

I'm not sure you ever get that vision out of your head.

Mike Gundy and Dan Hawkins are on completely different paths.

Mike Gundy is a coach of the year candidate, and Dan Hawkins could be a dead coach walking.

Raise your hand if you saw that scenario coming in December 2005.

Bob is staying in Norman.

Here we go again. It happens every autumn. Stoops is going to Notre Dame. Or Michigan. Or Florida. Or the Denver Broncos.

Some day, a rumor will turn true. But not this one. Not Notre Dame.

"There’s not even a job (open) at Notre Dame," Stoops said Monday night. "That’s ridiculous. Some guy makes stuff up."

In real life, Switzer had little chance of drawing Notre Dame’s interest. The Irish are not in the habit of hiring rogues. But he would always listen.

Remember Josh Jarboe? The Sooners could have used him this year.

A fourth Tennessee football player has been charged with breaking the law in the last two weeks.

Nyshier Oliver is facing a charge of shoplifting. The 18-year-old freshman defensive back was cited at 1:45 p.m. on Nov. 7, a few hours before the Volunteers hosted Memphis. He is scheduled to make a court appearance on Nov. 23.

TCU's Gary Patterson is not going to lobby for votes.

TCU coach Gary Patterson has no plans to lobby for votes and a spot in the national championship game if his team ends the regular season undefeated.

Patterson believes that all the fourth-ranked Horned Frogs (10-0, 6-0 Mountain West) can do to prove themselves is play well. If that’s not enough, he figures campaigning won’t really change anything.

"Do you think it would do me good to politick to play for a national championship?" Patterson said Tuesday. "All I can do to change people’s minds is the play on the field."

Shocking. There is very little diversity in the leadership positions in Football Bowl Subdivision schools and conferences.

The Institute for Diversity and Ethics in Sport at the University of Central Florida released the report Tuesday. It found that for the 362 campus leadership positions studied, more than 91 percent of the officials were white.

Are congratulations in order? The BCS has a new executive director.

Defending the Bowl Championship Series and trying to convince critics that it is the best way to determine a college football champion has to qualify as one of the toughest jobs in America.

Bill Hancock now has that job.

Today is the tenth anniversary of the Aggie Bonfire collapse. Our thoughts go out to Texas A&M and the families of those that lost their lives.