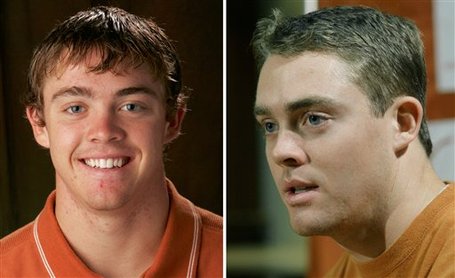 Colt McCoy has a lot of people who thought he couldn't hack it at UT. And those were his friends.

Colt McCoy left the tiny town of Tuscola with dreams of being Texas' next great quarterback. Lingering below the self-confidence were words that stung his heart.

Too small. Too slow. Weak arm.

Those were his friends saying that.

Great small-town player, they said, but Texas and the Big 12 were places for the big boys, not a player from the lower divisions of high school.

"I had people in my town, friends of mine, people real close to me saying that I would never be able to play here," McCoy said. "They see a guy like Vince Young or Ryan Perrilloux. Everybody thought I was awesome in high school but that's just from our town.

"I definitely used that as motivation," McCoy said. "I still do to this day."

ESPN's Richard Durrett profiles Chris Hall. Did you know he is an ordained minister?

Mark Mangino on the Longhorns:

"Texas is an outstanding team, an excellent football team. No weaknesses on the offensive side of the ball. They feature a great quarterback in Colt McCoy. He can beat you throwing and he can beat you with his feet. Their defense gives you looks, moves around, they have a really impressive defensive line, outstanding linebackers that run sideline to sideline and really an excellent secondary that plays the ball well and also tackles well. It’s a challenge to go down to Austin, but we’re looking forward to going down there and playing very well."

Rick likes the smart ones. Of all the freshmen that played against UC-Irvine, Shawn Williams was the most impressive.

Shawn Williams didn't have a star-in-the-making moment like other Longhorns freshmen did in their debuts Sunday.

He didn't swoop in for a blocked shot or make a slashing drive for a basket like Jordan Hamilton. He didn't convert two steals into fast-break dunks like Avery Bradley. He didn't make three three-point baskets like J'Covan Brown.

But the 6-foot-6-inch Williams impressed Texas coach Rick Barnes nevertheless in the season-opener against UC Irvine.

"I thought Shawn Williams did the best job of taking care of the details out of all the young guys," Barnes said. "He's a very cerebral player."

One of the challenges this season is managing the depth of talent.

"We talk about flow. How do we maintain the flow?" Barnes said. "We’ve got a group of guys who understand what we need to do, and when we go to the bench, it’s up to the guys who come into the game to maintain that flow."

Does Mike Sherman think his defense has improved?

"There were times in that [Oklahoma] game, watching it and then watching the tape, where we're wrapping guys up, we're more physical, we're reacting quicker," Sherman said. "We'll have two good plays and then we'll give up a big play.

"So do I see at times us playing great defense? Yeah, there are times I do see that. There's also times I see us not. The consistency is more what is lacking."

What to do? The Aggies have quite a dilemma. Do they wear pink to the Baylor game and support breast cancer research or not? Opinion is running rampant on Texags.

When asked if Oklahoma was his last coaching stop, Stoops replied:

A certain Oklahoma City sports writer is worried about the Aggies.

Only one top-shelf school seems prone to losing its coach to another school. Alabama lost Bill Curry to Kentucky in 1989, though Bama was trying to kick him out the door, and then lost Dennis Franchione to Texas A&M in 2003, when it most certainly didn’t want to lose Fran.

A&M can be sneaky. The Aggies got Franchione from Alabama, Jackie Sherrill from Pitt in 1982 and Bear Bryant from Kentucky in 1953.

A&M, that’s who schools like Oklahoma ought to worry about. Not Notre Dame.

The latest from the coaching rumor mill is that there is a mutual interest between Texas Tech coach Mike Leach and Louisville.

It is almost a certainty that Cardinals’ coach Steve Kragthorpe will be relieved of his duties after this, his third season. Louisville is 4-6 with games left against South Florida and Rutgers. It needs to win those to have a chance to go bowling for the first time since 2006. Kragthorpe is 15-19 at Louisville.

Mangino is a good coach. But his story is a cautionary tale for all in his profession.

In today’s world, coaches can’t berate players like they used to. Physical contact is an absolute no-no.

Mangino appears to have trouble adapting to those societal changes. His career is in serious jeopardy because of it.

Another sports writer thinks it is all about the record.

If Kansas fires football coach Mark Mangino, it will be about one thing: he’s losing. The stuff you’re hearing about Mangino now — he has a foul temper, he bullies his players, he has a history of throwing tantrums after receiving parking tickets on the campus — were all true when he led KU to a 12-1 record two years ago. It was the best season in Kansas history, and I don’t recall any talk about Mangino’s hot-headed manners, or how shabbily he treated others. But Mangino has lost 5 games in a row, and and the Jayhawks are at the bottom (1-5) of the Big 12 North standings, and they play at Texas on Saturday, which means another massacre is coming.

The Sooners are leaders in sickle-cell testing.

One of the biggest issues in dealing with players who have sickle cell is that a sickling episode may look like it’s heat-related, especially since intense and prolonged physical activity can cause them. Knowing that a player has the sickle cell trait is the best way to avoid a problem.

Both Oklahoma and Oklahoma State test for sickle cell.

Earlier this year, the NCAA recommended schools test for sickle cell, but it stopped short of making the testing mandatory.

It’s certain Suh is excited to take on a Kansas State offense that likes to play smash-mouth football.

“They definitely want to come downhill on you, which is great for me,” Suh said. “That’s my type of football, not the cutesy stuff that we see the majority (of the time) in our conference with the spread offenses.”

Upon further review, even after TCU's demolition of Utah barely registered on the BCS' Richter scale, Gary Patterson remains resolute.

With no more chances left to impress, he's still content just to be in the conversation.

Still happy with the system.

Either Florida or Alabama will slip up, but not both.

And that still leaves Texas, which isn't likely to lose to Kansas, Texas A&M or whatever the Big 12 North offers as a sacrifice.

The BCS does not do refunds. Ivan Maisel wants his money back.

I want my money back.

It is the third week in November -- the traditional beginning of rivalry season -- and the best game is No. 11 Oregon at unranked Arizona.

The National Championship Issue looks at the relationship between the BCS and money.

The reality is that there are some teams that have more fans and bring in money no matter what they're doing on the field, and some teams that could win big every year but still not see many fans (respectively). Two good examples are South Carolina and Boise State. Between 2002-2008, the Gamecocks were 44-41, going 8-5 in their best season; the Broncos were 70-8, going 9-4 in their worst season. But in terms of attendance, South Carolina averaged 80,000 per game while Boise State averaged just 30,000 per game. Quite the difference.

So who you think bowl executives would rather have playing in their game?