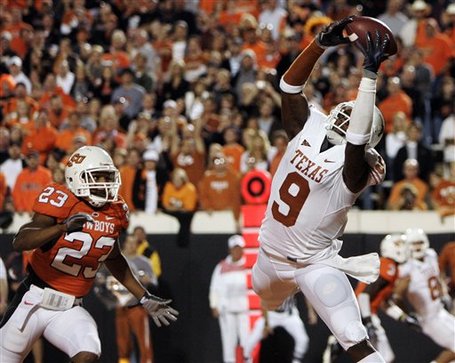 So they can't read The Eyes Of Texas? The Longhorns are not supposed to read any college football preview magazines.

The offensive coordinator Greg Davis especially wanted Longhorns quarterback Colt McCoy to avoid the common theme that he was one of three favorites for the Heisman Trophy and that the Longhorns’ season would depend on his play.

"You tell them not to," Davis said of players reading the magazines, "but they do."

The Horns had a defensive strategy. It worked.

Defensive coordinator Will Muschamp wanted to focus on shutting down OSU’s run game after giving up 217 rushing yards to the Cowboys last season.

"They’re a running team and we wanted to put the ball in the quarterback’s hands," Muschamp said.

The strategy worked. With a strong push from the front four and a secondary that studied enough film to be able to sit on routes, the Longhorns didn’t let Robinson find his rhythm.

Barking Carnival has the good, the bad and the ugly, Poke style.

Craig James gave his reason for voting the Horns No. 2:

Despite leading by three touchdowns in the first quarter, the Sooners had to hold off the Wildcats late for a 42-30 victory at Owen Field to move to 5-3 overall and 3-1 in the Big 12.

Yet in the second half, K-State's Brandon Banks haunted the Sooners with a bag of big plays, including a kickoff return for touchdown that brought the Wildcats to within 35-30.

Whoop! The Aggies won again. They beat Iowa State 35-10. Are they back from the land of the dead?

Two weeks after Kansas State worked this team like a part-time job, the Aggies are somehow back on the road to respectability after putting together consecutive wins over Texas Tech and Iowa State. And these wins haven't been nail-biters. The Aggies have done some bullying lately and in the take-no-prisoners world of college football, it's better to hit than be hit.

Texas Tech beat Kansas 42-21. Jayhawk quarterback Todd Reesing suffered a groin injury in the game with Colorado and it has had an impact on his performance.

This is a headline you never expect to see.

Tyler Hansen said it was all his fault. That was difficult to believe.

Colorado’s sophomore quarterback was sacked eight times during Saturday’s 36-17 loss to Missouri. Hansen avoided others with his scrambling.

Hansen fumbled three times — once on a center exchange — and also threw an interception. But in keeping with the theme of the day, Hansen said what went wrong was his fault, no one else’s.

Nebraska’s 20-10 victory Saturday over Baylor, noted for the starting debut of quarterback Cody Green, was probably better suited only for the 31,702 in attendance at Floyd Casey Stadium — the smallest crowd to watch the Huskers since a 1991 visit to Oklahoma State.

About that fat girlfriend remark: "To those that are offended, I’m offended that you don’t think I get to exercise my First Amendment rights, so that makes two of us," Leach said.

The Big 12 South race is over, but the North is a different story.

The Big 12 South football race is over. Texas will play in the Big 12 championship game. The Longhorns would have to lose twice to miss Arlington. UT could lose, I suppose, at Texas A&M on Thanksgiving night, but no way will the ‘Horns lose at home to Kansas or at Baylor.

But that doesn’t mean we know who Texas will play in the Big 12 title game. The North Division is wilder  (more mediocre) than ever.

The BCS mess. Should government intervene?

The BCS Guru looks at the demise of the once heralded Trojan Empire.

Like the Byzantine, Ming and Romanov empires, all good things must come to an end. Such was the case for the Trojan Dynasty that has ruled the Pac-10 since 2002.

In retrospect, it was easy to see that this was a rebuilding year for USC. It lost most of its defensive stalwarts, including an entire linebacking corps that went among the first 38 picks in the NFL draft. It lost its star quarterback, who now hot dogs it for the New York Jets. It even lost its offensive coordinator to a rival Pac-10 school.

But because it's USC, it was assumed that it'd go on like business as usual ... until Saturday night, when the Oregon Ducks formally pronounced the fin de siecle with a resounding quack.

Nice. We might end up playing against this guy at the end of the season.

Adam Jones looks at week nine of the season.

On a crisp Saturday night in Autzen, the Ducks flew higher than a UVa frat boy at a Dave Matthews Band concert. USC got worked. USC, in the Pete Carroll era, does not get worked. The Trojans occasionally "stub their toe" or "falter" or "slip up" or wonder "who the hell is Jacquizz Rodgers and why can’t we tackle him?" But they do not get worked. Until Saturday. Oregon broke open a close first half with an offensive barrage that ended 600 yards deep into the night, with quarterback Jeremiah Masoli running for 164 yards and his backfield mate, tailback LaMichael James, slicing for another 183. Why yes, it was the most points and yards ever run up against Pete Carroll’s USC, even dating back to when they didn’t start eleven future NFL players on defense. This is not vintage USC; but give the Ducks credit.