Anatomy of Momentum: Drive Before the Half Against OSU

Share All sharing options for: Anatomy of Momentum: Drive Before the Half Against OSU

Good offenses and good teams generally respond after the opponent scores a touchdown. That was the task Colt McCoy and the offense faced after Oklahoma State cut into the early Texas lead after Beau Johnson scored on a one-yard touchdown plunge to make it 17-7. Good offenses also operate well in the two-minute drill -- the Longhorns got the ball with 2:16 left on the clock. The game plan for Greg Davis was clearly to spread the field to take advantage of the Oklahoma State secondary, where Davis felt he had match ups favoring Texas -- that game plan meshed well with the two-minute drill Texas had to run with so little time left on the clock, though a switch to 11 personnel would ultimately help the drive find the end zone.

The other thing that good teams do is score before halftime. A score just before the half against Wyoming helped the Longhorns establish momentum heading into halftime and, when combined with Mack Brown's philosophy of deferring to the second half, scoring before halftime can give Texas two chances to score without the opponent being able to touch the football.

The Longhorns would not be able to start with a short field, however, as Oklahoma State kicker Quinn Sharp put the ball went into the end zone for a touchback. Texas would have to drive 80 yards for a momentum-swinging touchdown. Texas begins the drive with two timeouts.

Texas, as they did throughout much of the first half, comes out in an empty set, with Dan Buckner in the flex, James Kirkendoll and Fozzy Whittaker split to the bottom of the screen, and Jordan Shipley and John Chiles split to the top: 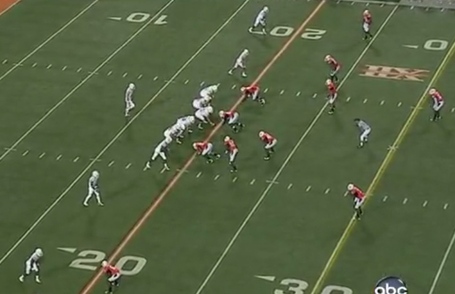 OSU has three down linemen, with the Sam linebacker showing blitz and two deep safeties. Notice that James Kirkendoll is uncovered in the slot to the bottom of the screen. 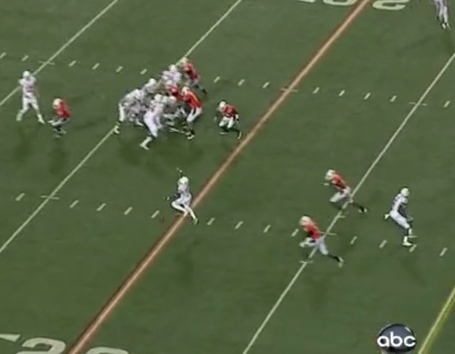 Instead of blitzing the Sam backer, OSU brings the Mike and Will backers, causing a problem in the Texas protection scheme that leaves the strongside defensive end unblocked and headed for McCoy. The hot receiver on the play is Kirkendoll, but McCoy throws behind him incomplete -- probably just as well since a complete pass would have gained little yardage and kept the clock running, draining precious seconds. 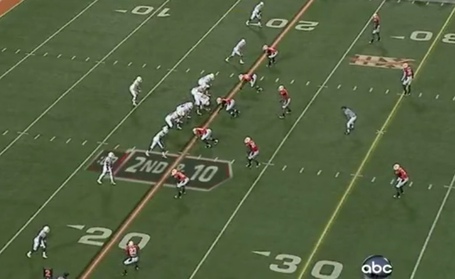 Texas stays with the same personnel group, while Oklahoma State stays with two safeties deep, but walks a defender up on Kirkendoll in the slot this time. Notice that Bill Young also dials up press coverage against Jordan Shipley. 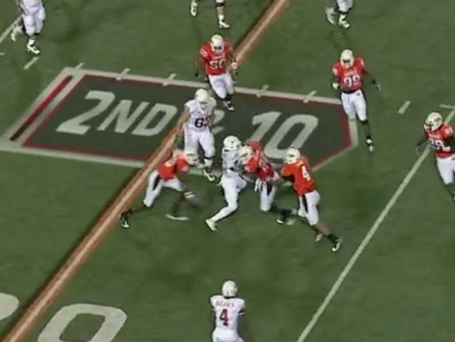 Once again, McCoy looks short to Kirkendoll on a hitch and he breaks a tackle before being stood up by Andre Sexton. It's the most controversial play of the game and one that could have swung the momentum of the game considerably -- as Sexton drives Kirkendoll backwards, stopping his forward progress, he rips the ball out of his hands, seemingly giving Oklahoma State the ball inside the Texas 20 yardline.

A touchdown cuts the Texas lead to 17-14 just before the half. Instead, the referees, correctly in my opinion, rule that Kirkendoll's forward progress was stopped and Texas keeps the ball. Oklahoma State calls a timeout, ostensibly to either challenge the play or force the booth to look at it, but the play cannot be reviewed. 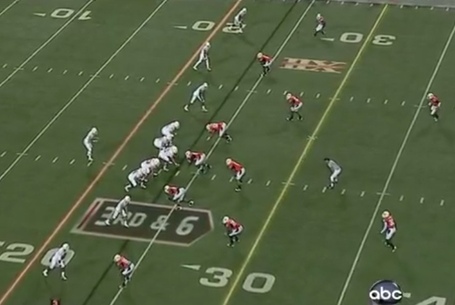 Same personnel for Texas, except the strong side of the field is now at the top of the screen. OSU has two safeties deep and is not in press coverage against Shipley this time. OSU rushes the linebacker in the middle of the field. 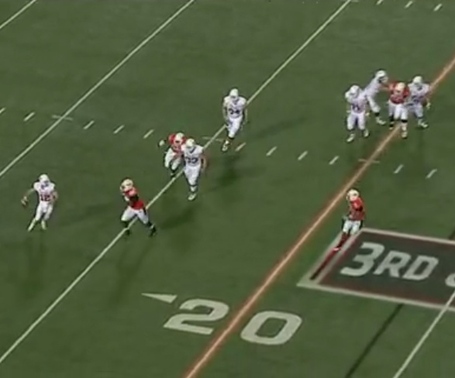 Flushed from the pocket by a twisting OSU linemen, McCoy throws on the run, finding Chiles wide open down the sideline -- Chiles either ran a stop route or broke off his route. Either way, it's the biggest catch of his Texas career for the former quarterback, who gains 16 yards and keeps the drive alive. 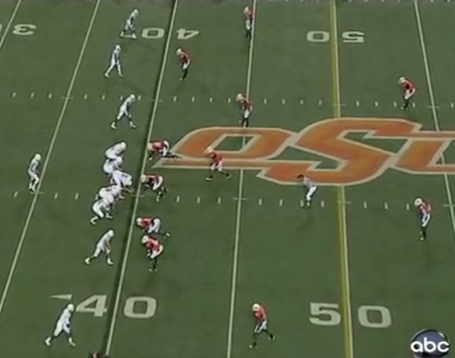 Texas keeps the same personnel on the field. Notice that OSU is once again pressing Shipley at the line of scrimmage, with two safeties deep and three down linemen. 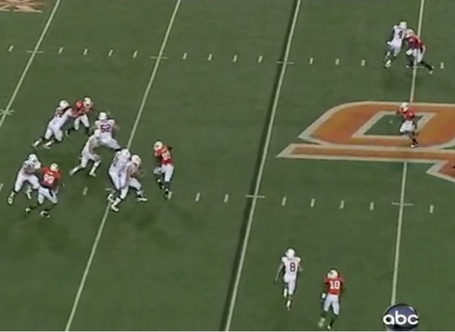 Two seconds into the play, seeing no one open downfield, McCoy bails from the pocket and breaks a tackle to pick up two yards. Texas calls a timeout to stop the clock, leaving them with one remaining in the half. 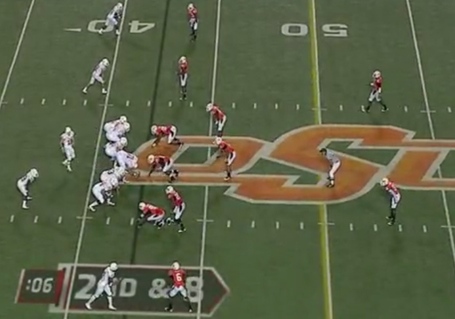 Texas changes their personnel grouping for the first time on the drive, bringing in EBS and keeping Whittaker in the backfield. Malcolm Williams comes in at split end, while Marquise Goodwin takes over the flanker position. Notice that OSU keeps two deep safeties, while walking the nickel back up close to the line of scrimmage over Shipley.

Since McCoy got a little antsy in the pocket on the last play, Davis calls for max protection, keeping both EBS and Whittaker in to block. 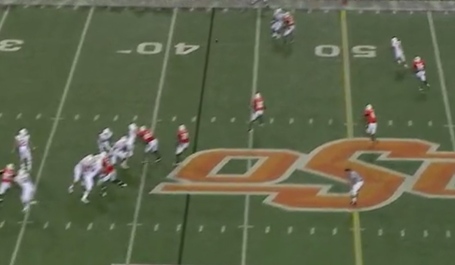 Kyle Hix gets beat on the right side of the line, but McCoy still has a perfect pocket to deliver the football downfield. Given that only three receivers are in the route, McCoy probably knows that Shipley will create enough separation on his out route to be able to deliver the football. Shipley gets the necessary separation and McCoy throws a strike for a 16-yard gain. The OSU safety on that side of the field got so much depth on the snap that he never even got close to Shipley on the play -- it's understandable that OSU didn't want to give up the big play, but the deep coverage should have been close enough to at least make it a smaller window for McCoy to throw into. 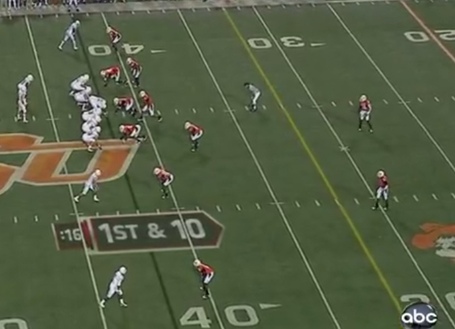 Texas stays with the same personnel, while OSU keeps two safeties deep and three down linemen -- the same look they have shown throughout the drive. Notice that the Mike and Will linebackers are showing blitz.

The linebackers both drop into coverage and EBS and Whittaker both release as a result. 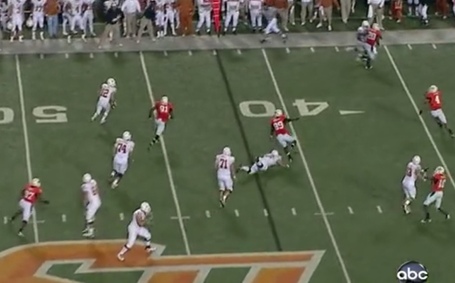 However, none of the receivers gain enough separation for McCoy to deliver a pass, so he heads out of the pocket and towards the sideline, getting out of bounds after picking up two yards, preserving the final Texas timeout. 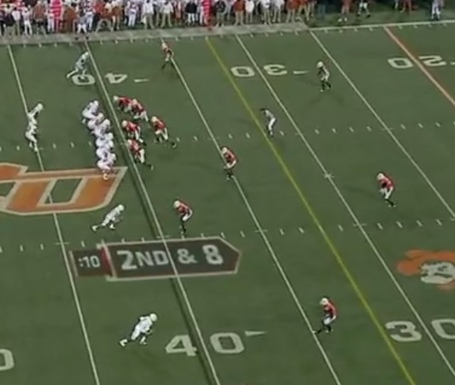 Texas stays in 11 personnel, while Oklahoma State blitzes both the Mike and the Will backers.

With six men on the line of scrimmage to pick up five defenders, the Longhorns pick up the blitz and allow McCoy time to throw downfield to Shipley, who beats Perrish Cox in one-on-one coverage -- the safety deep on that side of the field comes up the first-down marker and stops. 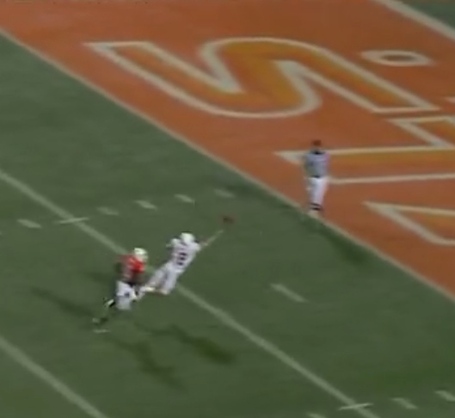 Shipley is open, but McCoy overthrows the pass by several feet -- another replay shows that Shipley cut farther inside than McCoy anticipated, leaving the pass thrown too long. Had McCoy and Shipley been on the same page, the play would have gone for a touchdown. 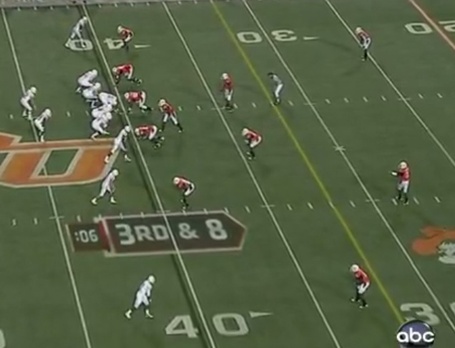 Texas substitutes for the 3rd and long play, taking out EBS and bringing in Dan Buckner to play the flex tight end position, while inserting Chiles at flanker. As usual, Oklahoma State has two deep safeties and three down linemen.

Oklahoma State drops back in man coverage and although no Texas receivers can gain separation, since the defensive backs arent facing McCoy, after he eludes a defensive lineman, he has open field once he leaves the pocket: 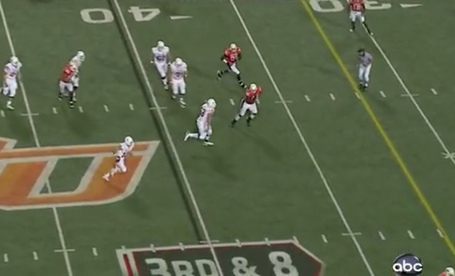 McCoy picks up 19 yards on the play and slides down at the 21, avoiding a hit -- McCoy has done much better at avoiding unnecessary hits this season.

The clock starts after placement of the ball and McCoy gets to the line of scrimmage quickly and spikes the ball to stop the clock. 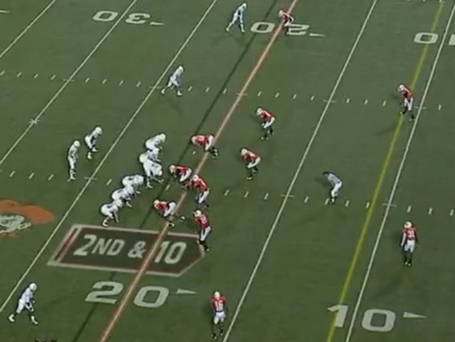 Texas lines up in 11 personnel, with Chiles at split end and Williams at flanker. OSU has three linebackers on the field and three down linemen, with the nickel back lined up well inside of Shipley and a safety over the top.

Oklahoma State blitzes the nickel back and the Sam backer. The line picks up the blitzers well, but Michael Huey and Chris Hall don't communicate well, as Hall picks up the Sam backer and Huey helps out Hix on the defensive end, leaving the defensive tackle free to come through, with only Whittaker standing between him and the quarterback. The tackle sheds Whittaker quickly and forces McCoy to throw the ball away, but picks up a personal foul pentalty for hitting McCoy in the helmet after he released the football: 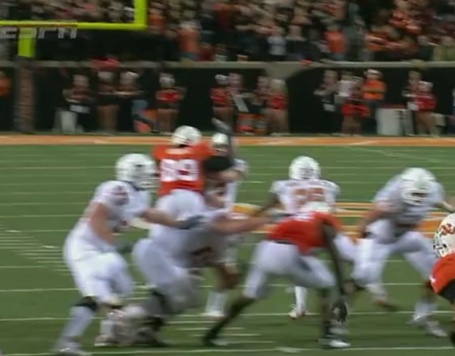 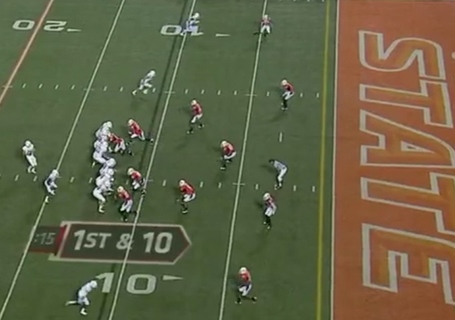 Texas keeps the same personnel on the field, while Oklahoma State rushes four and drops back in man-to-man coverage.

The play is designed to go to Shipley on a double move -- a curl and go -- but Malcolm Williams breaks open running the back of the end zone and McCoy finds him as the pocket begins to collapse. 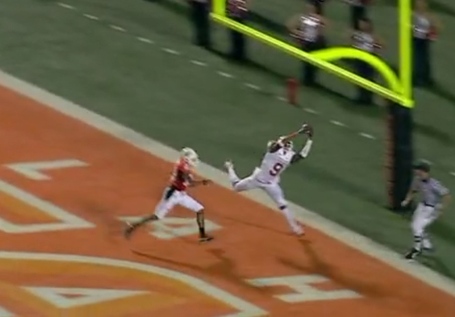 It's not an easy catch for Williams, who had to fully extend while making sure that he got his foot down, but McCoy helped by throwing an extremely catchable ball -- had the Texas quarterback really zipped it, the ball might have gone through the hands of the talented receiver.

Texas dodged a major bullet early in the drive when the officials ruled Kirkendoll's forward progressed stopped, negating the potential fumble and recovery by Oklahoma State. However, Kirkendoll must do a better job of protecting the football with both hands in traffic and have a better understanding of when he can no longer pick up yards on a play and is better off just going down.

The drive also featured a smart adjustment by Greg Davis. After getting little out of the empty set and having McCoy leave the pocket relatively quickly, he went back to 11 personnel to give McCoy more protection and allow him to stand in the pocket longer. It almost paid off with the pass to Shipley before eventually resulting in the touchdown pass to Williams.

The other key element of the drive was the scrambling of McCoy. Even though he did leave the pocket early on his two two-yard scrambles, he avoided potentially drive-killing sacks that would have also forced the Longhorns to use their last timeout, preserving it in the case of emergency. More importantly, though, it showed just how difficult it is to defend the Longhorns when McCoy leaves the pocket, especially in man coverage -- his 19-yard run was probably the biggest positive play of the drive before the touchdown pass to Williams.

Scoring before the half is also a major swing of momentum and it virtually put the game out of reach at that point, as the Longhorns went up 24-7 -- there was no way that defense was going to give up 17 points in the second half. By scoring the touchdown, Texas demoralized Oklahoma State going into halftime and completely took the biggest crowd in Oklahoma State history out of the game for the remainder of the contest. There's also something about Texas running the two-minute offense, as McCoy has seemingly found his rhythm several times this season just before halftime, notably against Wyoming to finally jumpstart the Longhorn offense.