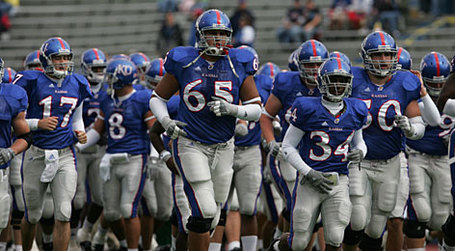 Thanks to Tully Corcoran, Topeka Capital-Journal, for the Jayhawk preview.

1. Pre-season talk had Todd Reesing in the Heisman mix, but he has struggled the past few games. Was that because of an injury or something else? What intangibles does Reesing bring to the position and the team?

Reesing has been playing with a groin injury which has affected his lateral mobility a little. For a guy like him, who likes to make those winding, bouncing scrambles in the pocket, it has taken away an element of his game.

But the groin injury isn't the whole problem. He's made some just plain bad decisions, which I think are, to some degree, the result of a guy who had an awful lot of pressure on him, especially when the defense was playing poorly early in the year.

That said, he's KU's spark plug. He's a great leader and his confidence permeates everyone around him.

2. Who are Reesing's favorite targets? How has Dezmon Briscoe performed this season?

It's been a down year for Briscoe, who along with Kerry Meier, is Reesing's favorite target. Briscoe has had a few more drops than he should. It hasn't helped that some of them would have been touchdown passes and one of them would have won a game at Colorado (it was a tough play, but one he would make most of the time).

I think his draft stock has taken a hit.

3. The offensive line really stepped in the Nebraska game and did a good job against Suh and Crick. What adjustments, if any, were made for that game?

There has been a lot of personnel shuffling along the offensive line, but it appears they found something with Jeff Spikes, a former tackle, at guard and Brad Thorson, a former center, at right tackle.

4. Talk about Jake Sharp and Toben Opurum. Are these two the core of the runing game?

Those are the two guys, but it's hard to tell if Sharp is healthy or not. He has a leg injury that took away some of his 4.3 speed and at this point it seems Opurum is the better back. He gets yards after contact and has enough speed. If it tells you anything, Opurum was offered scholarships by Notre Dame and Florida, although he was offered those under the assumption he would play fullback.

5. What are the overall strengths of the offensive unit as a whole?  What are the weaknesses?
The strengths are that Kansas has an excellent quarterback and the classic combination of a big-play receiver and a possession receiver on the outside. The Jayhawks don't run it well and are only passable in pass protection, but Reesing, Briscoe and Meier are good enough to overcome that most of the time.

6. What have been the Jawhawks defensive struggles this season?

Stopping the run, especially late in games, has been a killer. And it seems like if you need an easy 15 yards, just run a go route on whoever KU's right left cornerback happens to be that week (there are three possibilities). He'll get flagged for interference half the time.

The defense is much better than it was early in the year, and has actually played well enough to win each of the last five games.

7. How are they at defending the run? The pass? Can the Jayhawks  successfully pressure McCoy? Do they need to blitz, or will the typical two deep safety look with an eye on underneath routes do? How much success do you think they can have in any sort of man coverage?

First of all, I think man coverage would be a quick way for Jordan Shipley to go all Adarius Bowman on KU (you may recall a 300-yard receiving game by Bowman against KU in 2006) Kansas doesn't have the athletes to compete with Texas' receivers one-on-one, and KU has never played much man defense anyway.

While I don't expect McCoy to be pressured a ton, the Jayhawks have to decent pass rushers in Maxwell Onyegbule and Jake Laptad, so three or four sacks isn't out of the question. I think KU should blitz a lot, because it's obvious that lining up Texas' guys against Kansas' guys is not a fair matchup. Maybe blitzes can be a bit of an equalizer. I don't know.

8. What are the strengths of the defensive unit as a whole? What are the weaknesses?
The strengths are the ends I mentioned above, Onyegbule and Laptad, and safety Darrell Stuckey, who's an excellent player having a down year.

The weaknesses are the linebackers. I could give you a dozen different theories as to why they're the weakness, but suffice it to say they virtually never make any kind of play.

9. What are the key matchups?

I think implying there are pivotal matchups implies Texas should be concerned with anything other than Texas, which I'm not sure is the case.

Briscoe is the most talented player on KU's roster. He'd be a starter anywhere in the league, I think, including Texas. He's a first-day NFL draft pick, most likely. And he had 269 yards at Oklahoma last season. So he's the most dangerous guy from a UT perspective.

10. What do the Jayhawks need to do to beat the Horns?

Win the turnover battle by at least two, maybe three, while also not having anything disastrous happen on special teams.

In most games, you'd say Kansas would fare better if the score got into the 30s, but in this case I don't think KU wants any part of a shootout with Texas. The best case scenario for KU is that it gets a pick six or whatever early, maybe gets another turnover in the first half and goes into the fourth quarter with a 10-7 lead or something.