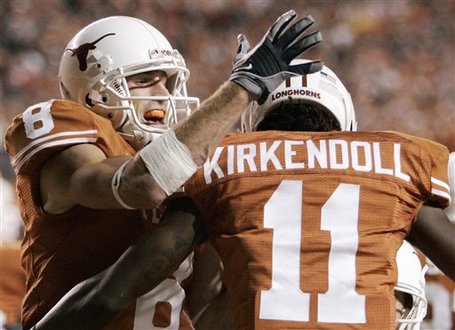 Colt McCoy has lots of options.

With the No. 3 Longhorns now in their stretch run to a Big 12 championship, he has re-emerged as a late-season favorite for quarterback Colt McCoy.

And the more targets for McCoy, the winningest quarterback in NCAA history, the more headaches for opposing defense.

McCoy-to-Jordan Shipley is still arguably the best pass-catch combo in the country, but Kirkendoll has 19 catches with three touchdowns in the last three games.

It is a short turnaround this week.

For the Texas players, it will be difficult to forget the electric postgame buzz hovering over Royal-Memorial Stadium after Saturday's 51-20 win over Kansas clinched a spot in the Big 12 championship.

It's not every game that quarterback Colt McCoy celebrates so mightily that he does everything but smooch Bevo. Or that defensive tackle Lamarr Houston bellyflops on top of the Longhorn logo at midfield to start a seniors-only dogpile.

Yet Mack Brown's message to his Texas players on Sunday was this:

Forget the win that put an exclamation point on the traditional senior day.

Prepare for the quickest game turnaround by a Longhorns team in 16 years.

No news is good news.

The more things change ... well, actually, we wouldn't know about that. We knew going into the weekend that there was infinitesimal chances of movement at the top, so to dispense with the formalities: The top seven is identical to last week's top seven, which was identical to the top seven the week before that. Florida, Alabama and Texas have occupied the top three slots in various orders in all six BCS polls this year and have no realistic expectation of relinquishing them, probably even after the Gators or Tide take a hit in the SEC Championship game. The only team that fell out of the top 10 was No. 9 LSU, which was probably overrated with no really quality wins, anyway (and remains so at No. 15 after its loss at Ole Miss, which somehow checks in 10 full spots below the Tigers, at No. 25, despite the head-to-head win, an identical record and a practically identical set of wins. But if we get into the injustices outside of the top 10 -- BYU is still in the top 20? For what? -- we'll be here all night).

For more on the Texas-Kansas game, see the Kansas wrap up. 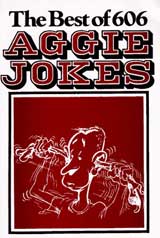 Would #1 be Aggie football?

With the win over Baylor, the Aggies can go bowling.

Early in the second quarter Michael took a handoff, darted to the right sideline and dashed a school-record 97 yards for a touchdown. Michael, an electric freshman from Beaumont, said he became gassed at about the Baylor 15-yard line — with Bears safety Jeremy Williams in hot pursuit.

"I thought, ‘You might as well keep going — you ran this far,’ " Michael said.

That sentiment also summed up the Aggies’ attitude in finally winning their sixth game on their third try — making them eligible for a bowl for the first time under their second-year coach. A&M plays host to No. 3 Texas on Thanksgiving night with a chance to send its bowl stock rising.

"Texas A&M should never not be in a bowl," said quarterback Jerrod Johnson, who finished an efficient 19-of-25 for 153 yards with a pair of passing touchdowns. "Last year was hard on us."

What league is that? The Bears aren't even close to being the Aggies' league.

The meltdown on TexAgs continues. The refs are against the Aggies because the Big 12 conference wants the Horns to win the BCS, the refs are protecting Colt McCoy, making tacky remarks about McCoy... But this has the best quote on TexAgs to date:

Before the world wide web, village idiots usually stayed in their own village.

We couldn't have said it better.

His parents must be so proud. Everyone's favorite Aggie has a game prediction.

Where else would you go but Aggie/Dallas Cowboy tight end Martellus Bennett in the locker room after the Cowboys’ 7-6 win over the Redskins on Sunday?

"This is Upset Central," Bennett said. "The Longhorns have been doing good with Jordan Shipley and Colt McCoy. I mean, Cart McCoy because my brother (Michael) punished him. The records don’t matter. Doesn’t matter if one team is 11-0 or 10-0 and one team is 1-9. It’s going to be the Aggies 24-17."

The Sooners, hard-luck most of this 2009 season, were hard-up by the end of Texas Tech’s 41-13 rout, when the Red Raiders were bopping to "Jump Around," the House of Pain song that rang through the night a year ago as OU whacked Tech 65-21 at Owen Field.

The Pokes beat Colorado last Thursday night with a 26 year-old quarterback at the helm.

With Zac Robinson out and Alex Cate struggling, Brandon Weeden stepped in and saved the day in OSU’s 31-28 win over Colorado at Boone Pickens Stadium on Thursday night.

After the Pokes passed for zero yards in the first half, Weeden replaced Cate, who started in place of Robinson, at the start of the second half. The 26-year-old sophomore was 10-of-15 passing for 168 yards and two touchdowns as he sparked the Cowboys to a comeback win.

Mike and Kristen Gundy get out among the OSU faithful after every home game.

The Oklahoma State campus, bristling a couple of hours earlier with a Thursday night football game, now is mostly deserted. But Kristen and her husband are on a mission.

After Danario Alexander caught another 11 passes for another 173 yards in what inevitably became a 34-24 victory over Iowa State, Missouri coach Gary Pinkel tried his best to produce new superlatives.

"You talk about a creature. Just athletically, compared to almost anybody, he stands out."

This was all or nothing for Kansas State because a Wildcats loss meant no division championship and no bowl game. And the loss happened, 17-3, to surging Nebraska, which will meet Texas in the Big 12 title game.

But for Kansas State, this season wasn’t for nothing. Although the Wildcats’ 6-6 record meant a mere one-game improvement over last season, the feeling is vastly different — upbeat because of a program rejuvenated by Bill Snyder.

"Definitely," senior linebacker John Houlik said. "We wish we could have finished it right, but I feel like a foundation has been laid here."

Bad news for Dan Hawkins. The CU Board of Regents would likely support a buyout of Hawkins' contract, but so far there is no official word from Boulder.

The Colorado Buffaloes have one game left in what’s been a disappointing 2009. They have no shot at a bowl or postseason contention. But at least things aren’t dull.

While the Internet and sports talk radio buzzed with speculation over the coaching situation Friday, CU issued no official word on Dan Hawkins’ future. Athletic director Mike Bohn said once again, following Thursday’s 31-28 loss at Oklahoma State, that no decision has been made on the coaching situation and no timeline exists for one.

More bailouts. Kansas could be out quite a bit of money if they fire Mangino.

If the Kansas athletic department’s investigation into KU coach Mark Mangino’s treatment of players results in the school firing Mangino for cause, that decision could spark a battle for more than $6 million, according to Mangino’s contract.

This Saturday could be Mark Mangino's last game at Kansas.

Heading into what could be his final week as head coach at Kansas, Mark Mangino might still position the Jayhawks for a school-record third straight bowl game.

A victory over archrival Missouri this week would snap a six-game losing streak and make Kansas postseason eligible amid all the turmoil and controversy.

Mack Brown has nice things to say about Mark Mangino.

"What I do know is that Mark’s won a lot of games. I do know that he did a great job when he was at Oklahoma as the offensive coordinator," Brown said after his team’s 51-20 victory over KU on Saturday night. "And I also know that when you can only play 11 kids, there’s a lot of disgruntled kids on a football team. I do know that for a fact.

"I’m not calling out those kids that have said something, but he’s been there for eight years, and I’ve got a great respect for what he’s done on the field, I know that."

"I heard secondhand about that stuff, and I quit going crazy about it," Leach said. "But I have no intentions but to stay here at Tech."

With a playoff, the more you move down the rankings, the more teams have identical records and arguments about why they should be in. - BCS Twitter

Those at-large BCS bids are up for grabs.

With fourth-place TCU a victory away from securing an automatic BCS bid and the loser of Florida-Alabama essentially a lock to be selected, only two at-large berths would remain.

To be eligible for an at-large BCS bid, a team must finish 14th or better in the final standings, which are released Dec. 6.

Could there be some shuffling in the BCS?