Share All sharing options for: Anatomy of Explosion: Four Plays, 76 Yards Against Kansas

After a three and out on the first possession offensively highlighted by John Chiles running onto the field late on the first play, causing an offensive linemen to false start after being set for far too long and another mistake by Chiles when he failed to run the proper route, earning himself an earful of criticism from his quarterback, the Texas defense forced a three and out by the Kansas offense, highlighted by Chykie Brown's sack on third down. Then, Clark Ford earned himself a membership in the Block Party by deflecting the subsequent punt, but Kansas was fortunate enough to get a big bounce after the block, with the ball rolling all the way down to the Texas 24 yardline.

With nearly half the first quarter already expired, the Longhorns needed to establish some offensive momentum and begin gaining separation from the Jayhawks. The first order of business -- banishing John Chiles to the bench after his poor performance on the first drive. The second order of business -- continuing to throw the football against an overmatched secondary and getting the ball in the hands of offensive playmakers. Surprisingly, James Kirkendoll should now be included in that group after solid play of late. 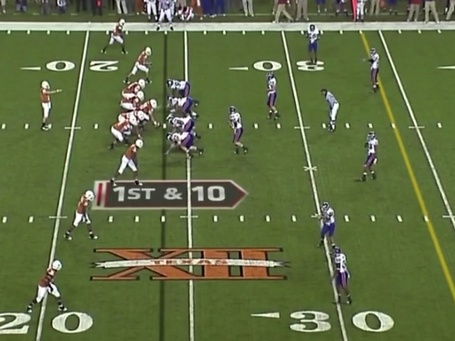 The Longhorns open their second drive of the game in the empty set. For the purposes of this play, the important players are at the top of the screen -- Jordan Shipley in the slot and Marquise Goodwin split wide. Kansas is playing nickel with two deep safeties and the boundary corner at the top of the screen well off Goodwin -- the perfect time for a screen pass. 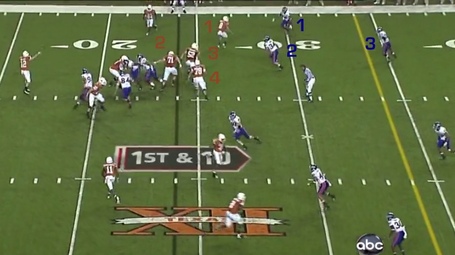 It is indeed a screen pass to Goodwin. Notice that the four Kansas down linemen all sold out on their pass rush, while three Texas offensive linemen released into the flat to block for the freshman speedster, setting up a 4-on-3 situation with the three Kansas defenders on that side of the field -- the cornerback, safety, and Will linebacker. If Charlie Tanner can block the linebacker and Chris Hall can block the safety, the play should work. 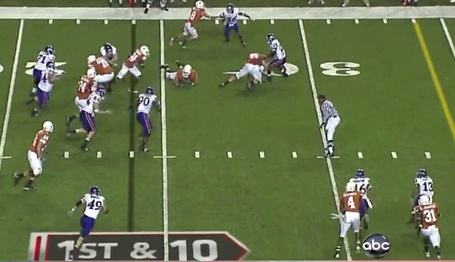 Tanner doesn't get a great block on the linebacker, but does well enough to allow Goodwin to get past him. Notice #90, Maxwell Onyegbule, the older brother of potential 2011 target Miles Onyegbule, who may well become one of the first members of the 2011 recruiting class, pursuing Goodwin with an angle on the world-class athlete. Notice, as well, the safety Justin Thornton just in front of Dan Buckner, who will also take an excellent angle on the play. However, the most important player at this point is Chris Hall, who must lay the block on the safety to spring Goodwin. Hall does, doing a good job of cutting the safety and knocking him off his feet.

There's Onyegbule, who almost catches Goodwin, with the advantage of a running start and the angle -- still, though, extremely impressive for a 250-pound defensive end. Ultimately, though Onyegbule can't bring Goodwin down, he probably slows him down just enough for the cornerback Shipley blocked earlier, Daymond Patterson, and Thornton to eventually catch up with him. 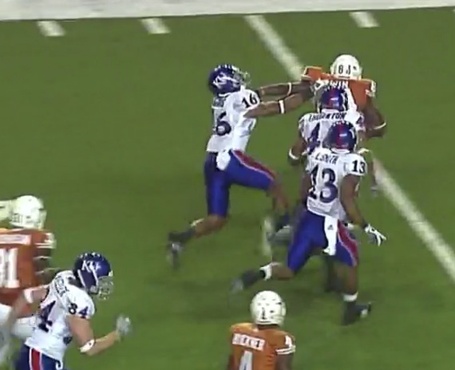 Patterson catches up Goodwin first -- and Goodwin may have picked up more yardage on the play had Shipley held his block longer, though he did his job more than adequately, but Goodwin stiff arms the defender behind him while still maintaing his forward momentum to help him pick up 34 yards by the end of the play.

The stiff arm is my favorite part of the play and it's worth saying again, even though it's just about played out now -- Marquise Goodwin is a football player, not a track guy playing football. A quick aside -- re-watching part of the Oklahoma State game the other day on the airplane, Goodwin came in on a crack-back block that probably wasn't even called by the coaches since it's something Texas rarely if ever does, and laid a lick on a linebacker to allow Cody Johnson to get the edge. Kid will mix it up. 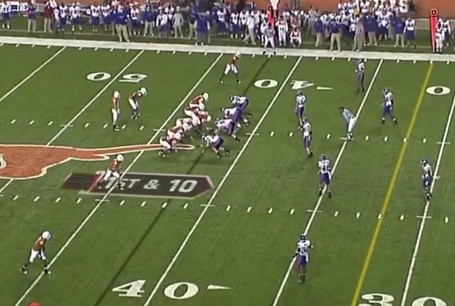 The Longhorns bring in Cody Johnson and EBS in their 11 personnel grouping, while Malcolm Williams also comes on the field as the split end. Notice that Kansas has a linebacker matched up against Shipley in the slot and is walking the safety on Williams' side of the field up into the box expecting a run from Johnson. 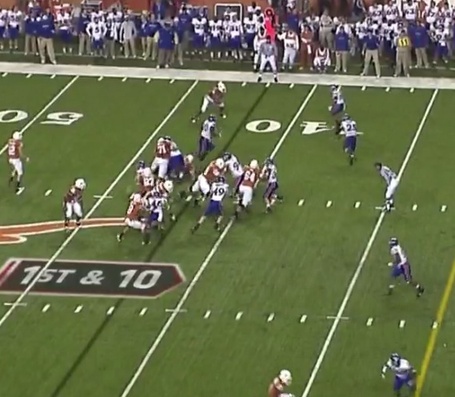 In all likelihood, there was a running play called, especially since Texas hadn't called a run on any of the first four plays from scrimmage. McCoy probably checks out of the run when he sees the safety walking up to the line of scrimmage and the cornerback well off of Williams. Notice that the Texas offensive line still run blocks on the play, which may slow down the cornerback going against Williams if the cornerback is pattern matching and reading the EMLOS (End Man on the Line Of Scrimmage), a common tactic in that coverage. In this case, though, the cornerback is watching Williams all the way and comes up to make the play, but not before Williams picks up almost three yards. 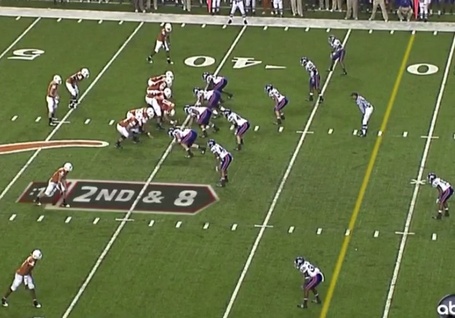 Texas stays with the 11 personnel group, with Cody Johnson on the left side of McCoy. Notice that Kansas has once again walked their safety up into the box with the three linebackers, giving Kansas an 8-on-6 advantage against the run. 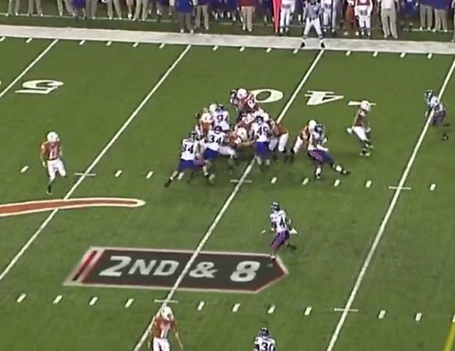 For whatever reason, McCoy doesn't check out of the run this time and Johnson gets the hand off on the pseudo counter. Hey, let's play a fun game! It's called, "Where's Cody?" Much like "Where's Waldo," this game involves finding Johnson in the teeming mass of players at the line of scrimmage. Give up? Yeah, I don't really know where he is either, but he didn't get far, losing one yard on the play. 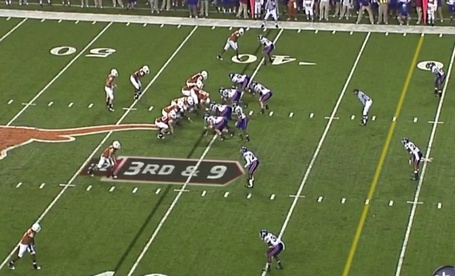 Surprisingly, the Longhorns stay in with their 11 personnel grouping, even keeping Johnson out on the field. For Kansas, it should be an indication that the Longhorns plan to throw the ball down the field, as this is basically a maximum protection look in a situation where they normally bring Dan Buckner into the game at flex tight end. Notice that Kansas is in nickel, with two deep safeties, while the cornerbacks give James Kirkendoll and Shipley big cushions. 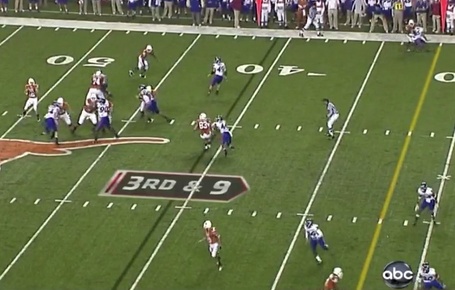 Kansas only brings four, so both Greg Smith and Cody Johnson release on their routes, but the important player here is Kirkendoll at the bottom of the shot. It's hard to see in a picture, but Kirkendoll is chopping his feet, selling a hitch route or comeback and the cornerback comes out of his backpedal and begins breaking on the play, jumping the route. Here's another look a split second later:

That's Kirkendoll at the bottom right, accelerating past the flat-footed defender. 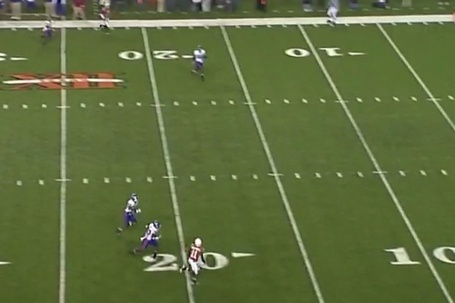 The defender attempts to recover, but Kirkendoll has the necessary separation and McCoy hits him in stride for a 41-yard touchdown pass and the lead, 7-0. Notice that the safety stopped backpedalling as soon as Kirkendoll began chopping his feet and took away the inside route, but didn't stay deep enough to remain over the top against the double move, leaving only fake plastic grass in front of Kirkendoll after he beat the cornerback.

Four plays, 76 yards, 1:34 expired. McCoy completed three passes for 77 yards, one to Goodwin for 34 yards, one to Williams for two yards, and one to Kirkendoll for 41 yards. Cody Johnson ran the ball once for a loss of a yard. Two good blocks on the screen by Charlie Tanner (less so) and Chris Hall (more so).

The drive generated momentum for Texas and got the Kansas defense on their heels, setting the stage for future dominance. Long, sustained drives may tire a defense, but a drive featuring one or more explosive plays demoralizes the defense and highlights the separation in terms of talent between the teams. Though Kansas commendably didn't give up, as they could have given the circumstances surrounding their head coach, a team with less mental toughness, like, say, Texas A&M, might have started to doubt and started to give less then full effort.

The drive also highlighted some excellent playcalling by the much-maligned Greg Davis, who made an excellent call on the screen to Goodwin, then saw something on film ($) against Kansas he exploited with the pass to Kikendoll:

We called it third-and-medium. They were really down-and-distance conscious, so we wanted to call a pump-and-go the first chance we got on third-and-medium. We called a pump route for Kirkendoll. He ran a great route, and Colt really laid it in there.

From the sound of it, Davis was just waiting to call the play, knowing it was almost guaranteed to be a success. It was and the play got the Longhorn offensive juggernaut rolling on the night and it wouldn't slow down much until the late stages of the game, after the outcome had long been decided.

Back to the Goodwin play -- not only did the Longhorns have favorable match ups with the cornerback and safety on that side of the field well off the ball, but it got the ball to Goodwin in a position to make a play, something the Longhorns haven't done enough of in recent weeks. And guess what, it worked. Later in the game, McCoy took a shot downfield to Goodwin and though the pass wasn't completed, it's still the type of play Texas should run to Goodwin once or twice a game. He hasn't hooked up yet with McCoy on a long pass this season, but when he does, it will probably go for a touchdown regardless of where on the field the ball was snapped.

Since Greg Davis believes in taking what the defensive gives him, it's no surprise that Texas didn't run the ball much early in the game, as Kansas often loaded up the box, as they did on two plays on this drive. Combined with what Davis saw as a susceptible secondary and it resulted in a lot of throws early in the game. It's not clear why Kansas was so worried about the run, but if teams sit back with two safeties deep in a nickel, the Longhorns should be able to run the football enough against anyone to keep the chains moving.