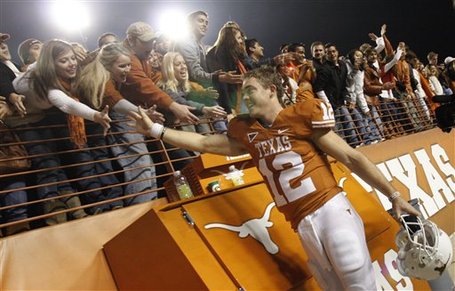 Colt McCoy had to overcome the toughest opponent.

"You put so much pressure on yourself and expectations on yourself to be the best, to complete all your passes and throw three or four touchdowns and throw for 300 yards," McCoy said. "When you don't, and you decided to come back for your senior year and come back and have an up-and-down year and you don't do all that, it hurts you mentally. You end up not having fun. You stress out all week. You think, 'I'll do better next week.'"

And there's more. Much more.

Texas needs a win to continue its BCS title quest. A&M, with its seniors playing their last home game, would love to finish a sweep of the Texas schools in the Big 12 at the Longhorns' expense. Can you say signature victory?

Excellent recruiting is part of excellent coaching. We all know about Mack’s prowess in that area. But don’t think for a minute that all those highly ranked recruiting classes (Texas’ class of 2010 is currently ranked No. 1 by Rivals.com) occur without elbow grease by Brown and his staff.

According to the Austin American-Statesman, Texas now has on its recruiting radar more than 200 prep sophomores in the talent-rich Lone Star state, as well as a few freshmen. Writes American-Statesman columnist Kirk Bohls: "How does a Big Ten or Big East school come into this state and entice them away from Austin, especially in this age of early commitments before recruits’ senior seasons?"

Thayer Evans believes Nebraska is the team standing in the Horns' way to Pasadena.

Nebraska will probably be the last team with a chance to stop Texas from playing in the Bowl Championship Series title game.

Nebraska must be better offensively to have a chance to beat the Longhorns. The Cornhuskers have the eighth-best defense in the Football Bowl Subdivision at 281.27 yards per game, but rank 82nd in total offense (345.45 yards).

The Aggies plan on an upset, even though they are a 22.5 point underdog.

Reminded that UT is 11-0 while the Aggies are 6-5, A&M senior safety Jordan Pugh shook his head.

"Doesn't matter," he said. "A record is just a record — it has nothing to do with how you play on that day."

A&M football is a like Forrest Gump's box of chocolate: You never know what you will get.

Every time the Aggies arrive at the stadium on game day, Sherman is not sure what he’s going to get.

Will it be the high-energy, focused Aggies who thrashed Baylor 38-3 on Saturday to become bowl-eligible? Or will it be the turnover-prone bunch that lost a week earlier to Oklahoma 65-10?

With a school-record 18 incoming freshmen playing regularly, the Aggies (6-5, 3-4 in Big 12) have been all over the map during Sherman’s second season. Which, frankly, is what he expected.

"I knew, with a bunch of freshmen, it would be a bit of an up-and-down type of team," Sherman said after knocking off Baylor in Kyle Field to improve to 5-1 in home games. "Sometimes, the freshmen will help you win a football game. Other times, they’ll bite you in the butt."

A blowout does wonders for the Aggie psyche.

For 60 minutes Saturday in Aggieland, things went according to wishes as Texas A&M dominated Baylor for a 38-3 victory.

It was a comforting afternoon for Aggie fans watching their football team becoming bowl-eligible. But those days have been more the exception than the norm when it comes to playing the rest of the Big 12.

If A&M wants to make any headway against the Horns, they need to be successful in the run game.

For our Aggies to have any chance of upending UT and pulling the biggest upset in the 2009 college football season, they must, must, must run the ball effectively. They have to keep Colt McCoy and the explosive Longhorn offense off the field. They must control the clock and time of possession. It is beyond imperative.

Where will the Red Raiders go bowling?

Tech’s most likely postseason destinations are the Holiday Bowl or the Alamo Bowl, both of whom had representatives in Lubbock Saturday. But the Red Raiders could even be a consideration for the Cotton Bowl if the Big 12 Conference were to get two teams into the BCS games.

"We’re probably looking at Texas Tech and Nebraska, depending on who finishes the year off,’’ said Larry Baber, the Holiday Bowl’s chairman of the board and a longtime team selection committee member. "I would guess those are the two teams we’ll be picking from, and I think either one of them would be a good selection for us.’’

Did you ever think you’d see the day when Bob Stoops would have a losing season at Oklahoma?

In fact, with two games left to play, the only goals remaining from what was once a promising season is avoiding a losing record, spoiling Oklahoma State’s BCS bowl hopes and keeping college football’s longest home winning streak alive.

Mark Mangino is going about business as usual.

Mark Mangino taped his coaches show Sunday. He did his radio show. He had his regularly scheduled Sunday teleconference with beat writers. The team practiced. Mangino was the coach, and this week Don Fambrough, as he customarily does this time of year, will deliver an impassioned anti-Missouri speech on the KU practice field. Mangino spoke publicly every day last week except Friday .

Things are kind of normal, actually.

Dan Hawkins, speaking at his weekly news conference Monday, said bringing in his son in his first recruiting class in 2006 was not fair to Cody.

"Here's a guy who's trying to do his best to win games and help his team and does everything right and is a good student and he's getting killed on Facebook and getting killed on his cell phone," Hawkins said.

Hawkins said Cody has taken unfair criticism for the Buffaloes' 3-8 record heading into Friday's season finale against Nebraska amid speculation the coach might be on his way out.

The Bears end their season playing Tech in Dallas.

It’s extravagant, high-tech and the complete opposite of a classic old stadium like Green Bay’s Lambeau Field.

There’s never been any stadium like this $1 billion ode to America’s Team. The stadium’s $40-million video screen cost about as much as it took to build the Dallas Cowboys’ old digs at Texas Stadium.

Baylor will end its football season against Texas Tech at Cowboys Stadium in Arlington on Saturday before a crowd that could reach 70,000. After watching their bowl chances slip out of sight in a dismal 38-3 loss to Texas A&M, the Bears are looking at the season finale as their bowl game.

Two words of advice for the Bears: Have fun.

The BCS has hired a PR firm.

How will TCU fans spend Thanksgiving evening? Cheering on the Aggies.

Thanksgiving dinner for fans of Texas Christian football will include raising turkey legs and rooting for Texas A&M to upset Texas in College Station. A Texas loss could set off a trigger that puts TCU in the BCS title game.

The Horned Frogs may not stay at No. 4 for long.

Independent BCS analyst Jerry Palm says it's entirely possible for TCU to fall below Cincinnati if both teams win out: "With TCU playing New Mexico, they have nowhere to go but down in the computers. The gap between Cincinnati and TCU figures to get bigger if anything. The polls would figure to get closer, too, even if Cincinnati does not actually pass TCU. I would expect the polls to be indecisive enough for the computer margin to push Cincinnati past."

Aggie football talent show. Thanks to LDEakman for this gem.