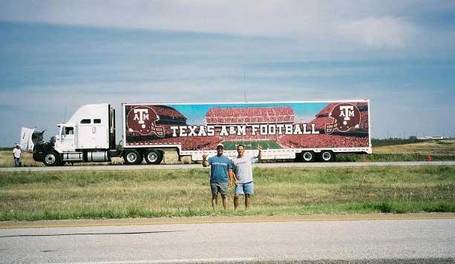 One photo sums up Aggie football. 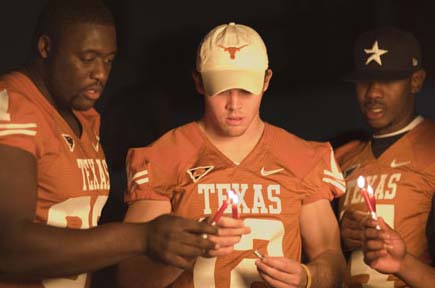 We just aren't as close as we used to be. The rivalry with the Aggies has cooled over the past few years.

In fact, the case could be made that Texas A&M has slipped to — dare we say it — the fourth-biggest rival of Texas in the Big 12 era.

Blasphemy, you say. How in the names of Reveille and Bevo could it be?

Oh, it could be for a variety of reasons. The Sooners have clearly usurped the Aggies as Public Enemy No. 1 because they're good. Or used to be good. And the Red Raiders and Cowboys have made such strides with either upsets or dramatic near-upsets of Texas that they, too, have passed the Aggies on the Whom to Hate Most list.

Is there anything as fun as picking apart the A&M secondary? McCoy could lob some bombs into the Aggie secondary and there probably isn't much they can do about it.

The deeper passes, surprisingly enough, have evolved as Texas has opted to use fewer wideouts on the field.

Offensive coordinator Greg Davis said Monday that he's used such a formation — known as an 11 grouping — about 60 percent of the snaps since the Sooners game. Pre-Oklahoma, the Longhorns used four- to five-wide sets, which required McCoy to throw quickly. Receivers didn't have time to run the longer routes.

The deep passes mostly have been set up by play-action fakes, which if done well, will freeze the defensive backs. Davis said he's called for play-action passes, in which McCoy first looks to be handing off the ball, about 25 percent of the time during the past month.

And during the past month, the receivers have settled in at more familiar positions.

Adam Ulatoski gets to face the sack specialist.

"I've got a good challenge ahead of me," Ulatoski said.

On film, he's already seen that Miller possesses a great burst off the ball, and a strong inside move as well.

"I think it will be a good matchup," Texas offensive coordinator Greg Davis said. "Adam is a guy who's seen a lot and played through an unbelievable amount of injuries. He's very intelligent."

Second time a charm? McCoy has another shot at the Davey O'Brien award. But does he deserve the Heisman?

Alabama running back Mark Ingram has held down the top spot on SportsNation's ballot since the middle of October and may control his own fate with high-profile games remaining against Auburn and Florida. But as the time to turn in a ballot comes closer, will some voters start to think about rewarding Colt McCoy for both his numbers this season and those the NCAA all-time wins leader put up over his entire career?

Too many to list. Awards, awards and more awards.

Brown also spoke of how he has changed ways in dealing with athletes over the years -- even in simple communications with them.

"Some kids don't hear what you say. They hear pieces of it," Brown said. "Usually, if I said four (teaching points) that were complimentary, and one that wasn't very good, he'll only remember the one that wasn't complimentary. And usually he won't remember like I said it or like I meant it.

"So I'll say, 'No, here's what you heard and here's what I said.' And we'll go back over it again. So communication is really, really difficult."

FoxSports' Peter Schrager has a prediction for the Big 12 title game.

I've been dipping my toes in this pool for some time now. And though even the most faithful 'Huskers fans have been e-mailing to tell me I'm crazy, I'm diving in head-first. With a win over Texas in Arlington in two weeks, Nebraska is going to shake this BCS thing up. Hell, they're our only hope at a little chaos in what has been an all too predictable 2009 college football season. Forget Lincoln, Neb., and its suburbs — if you're a fan of college football and all the excitement that goes with it, Nebraska's now America's Team.

Barking Carnival has some thoughts on Thursday's game.

Listen, the only scary things about Kyle Field are the architecture and the general ledger entries within the Athletic Department offices. ATM is a shiny 5-1 at Kyle this season. They thwarted juggernauts to get there, too. People have good reason to compare the possibilities of our game with the likes of what ATM did against Utah State, UAB, New Mexico, Iowa State, and Baylor. If we played all 5 of those teams at once, I am fairly certain we’d be putting the subs in at halftime. 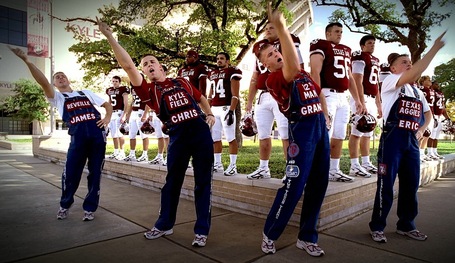 His decision-making is quicker and more decisive. He's not so quick to bail on plays and try to run out of trouble, although he's got the feet to do so. And he's not as apt to throw up the kind of wing-and-a-prayer passes that drove Sherman to distraction.

"Last year, he would throw some up that I really had trouble with. This year, those are very few and far between," Sherman said. "He's taken himself to an area that I didn't know if he could get to at this point."

Christine Michael is a breakaway threat.

“He’s like a 210-pound rabbit on steroids, with the speed of a cheetah,” Miller told reporters. “He’s like a hybrid, mutant running back.”

The Aggies don't want to think about last year's game.

This might not be a good thing for A&M.

"Certainly to be on a national stage, particularly this year when we've been a little bit limited in that area, is huge for us," A&M second-year coach Mike Sherman said. "It'll show what A&M is all about. The A&M family will be on national television with no other (football) on. It really puts us in a spotlight — a spotlight A&M deserves to be in, and this game deserves to be in. It's two great universities right here in the state of Texas battling it out." 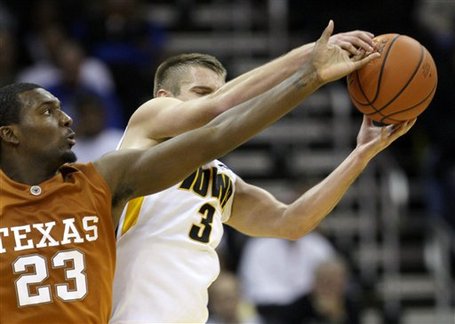 Dexter Pittman was nearly invisible in the first half Monday, quite a trick for somebody who weighs 280 pounds.

But Pittman later asserted himself, scoring 11 of his 15 points in the second half as the third-ranked Longhorns defeated Iowa 85-60 in the semifinals of the CBE Classic at the Sprint Center.

The first half was a little sluggish.

The Longhorns entered unfamiliar territory in the beginning of the second half when Iowa took their last lead after a three-point jumper by sophomore Matt Gatens, which would also be the last time the Hawkeyes would score for six minutes, as Texas went on a 17-0 run.

Iowa tried to initiate some sort of offense in the latter part of the game, but with Pittman and fellow senior Damion James on defense, the Hawkeyes had to think twice before going inside for the bucket. James totaled 13 rebounds, which pushed him over the 1,000-rebound mark for his career. James joins James Thomas (1,077) and LaSalle Thompson (1,027) as one of three Longhorns to attain this impressive accomplishment.

Despite a little laziness in the first, the Texas offense was able to outshoot Iowa 26-2 in the second half.

Black Heart Gold Pants has a summary from a Hawkeye point of view. The headline says it all: IOWA TOTALLY UPSETS TEXAS (...If Second Half Were 60 Seconds Long).

The Pokes will be cheering for the Horns soon. OSU still has a shot at the BCS.

If Oklahoma State prevails in this week's Bedlam game at Oklahoma, and if Texas remains undefeated with a victory over Nebraska in the Big 12 championship game, the Cowboys could be rewarded with their first appearance in a Bowl Championship Series game.

Something fishy in Lawrence? The timing of the Mangino probe is strange.

The timing is one of the strangest facets of the Kansas University athletic department’s investigation into football coach Mark Mangino’s treatment of his players. Why in the world couldn’t it wait until the end of the season? Why the urgency to jump-start it with two weeks remaining in the season?

One possible explanation is that once the athletic department became aware of complaints from parents of players, past and current, the university became liable for any potential negative consequences in the event the coach repeated the complained-about behavior. If that is indeed the case, the complaints issued surely centered on behavior far more serious than a coach’s finger in a player’s chest. This theory on why the investigation couldn’t wait for the end of the season only flies if there is a smoking gun and if the complaints differed greatly in magnitude from gripes from seasons past.

Mike Leach thinks this is a witch hunt.

Speaking out about the investigation into the actions of Kansas University football coach Mark Mangino, current Texas Tech coach Mike Leach said he feels the situation is a "witch hunt" and offered his support of the Jayhawks' embattled coach.

"Heaven forbid somebody should ask a (player) to pay attention and focus in for the sake of all his teammates and coaches and everyone else," Leach said during Monday morning's Big 12 coaches teleconference. "Well, there’s different ways to ask a guy to do that, and sometimes, after you’ve asked him a number of times, you raise the bar."

In his weekly Big 12 teleconference call Monday morning, coach Mark Mangino revealed that his communication with athletics director Lew Perkins had been "practically none" since the Athletics Department launched an internal investigation against Mangino last week.

Mangino said that he received a "social call" from Perkins last week, noting that the call lasted just a few minutes. He then repeated that he hadn’t had any communication with Perkins.

Brings back memories... Dan Hawkins' situation is similar to Bill Callahan's at Nebraska.

Job approval ratings change in a matter of days or weeks for coaches in major college and professional sports. This week`s Colorado and Nebraska football game provides a look at how much sentiment can change around programs in two years.

The Cornhuskers are making travel plans.

Hungry Husker football fans started snapping up package trips to the Big 12 championship football game even before Nebraska qualified for it. By mid-morning Tuesday, the official University of Nebraska allotment of tickets were sold out.

About 1,000 of NU's 11,909 allotment were offered to the general public Tuesday after donors had first crack at buying tickets for the Dec. 5 game at Cowboys Stadium in Arlington, Texas. The general public tickets sold out in an hour.

Just the guy for the job. More thoughts on the BCS and the whole PR firm business.

The BCS officially ran off the rails at 5 p.m. on Friday.

Twelve years of angst, anger and awkward results finally led to an announcement that, fittingly, came at happy hour. You probably missed it at the time, as did most of the media. A few business writers were sent a release announcing the BCS had hired a PR firm.

As preposterous as that sounds, the story becomes more incredible. The flacks hired by the BCS to smooth out the system's bumps work for Ari Fleischer.

Yes, that Ari Fleischer, the man who was W's press secretary; the man who spent part of his career spinning what some folks consider the worst president ever.

Doing the least with the most talent. Some college teams have squandered their top talent.

Former Longhorn and current North Texas coach Todd Dodge does not know if he will have a job next year.

"I really don't know," Dodge said. "I will sit down with coach Villarreal when the season is over with. At this point I don't know. He will let me know."

Have a wonderful Thanksgiving. Beat the Aggies.

The Daily Roundup will be back on Saturday with a game wrap up.