We're starting the day with some drama.

It is that whole poison cheese issue again.

You can picture Texas coach Mack Brown sitting in his office, wondering how he's going to combat the assumptions, the hype, the "poison cheese," as he often calls it.

"The only thing that is important to us now is Central Florida," Brown said of the Longhorns' upcoming game at Royal-Memorial Stadium. "Since it's not a conference game, it's a national game that can impact our national rankings." 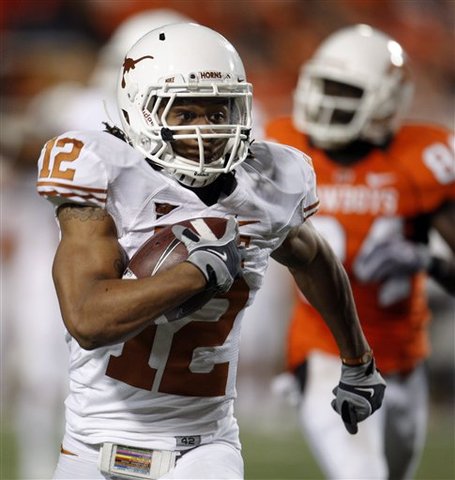 Attitude, leadership and dog tags. The defense has come up with another motivator.

"We had a huge team meeting [Sunday] just to say, "Hey, don't relax, don't give up, there's till a long road ahead of us, lots of games to play and lots of room for improvement," quarterback Colt McCoy said. "I really feel like the attitude on our team is really good and wants to get better. According to Brown, that attitude starts with the team's senior leadership.

"It's their team. They have some input, they have ownership in their team without taking over," Brown said. "So we're constantly asking our guys [for] ideas."

The latest came from senior defensive end Sergio Kindle in the form of dog tags that read "Texas Swagger."

"A lot of people might think it means cockiness or something like that, but it basically means that we are Texas and no matter what, no matter who, we're going to come to play," Kindle said. "We know how it felt to get complacent last year. I'm pretty sure nobody on the team wants to have that feeling again."

Everyone appreciates your support, Kirk. Austin American-Statesman's Kirk Bohls has his weekly nine things and one crazy prediction.

I voted Texas No. 1 on my Associated Press ballot for the first time this season because the Longhorns pure and simple strike me as the best team in the nation, with fewer flaws than any other unbeaten team. Florida doesn't have the passing game (ranked 90th), Alabama doesn't have the experienced quarterback (Greg McElroy ranks 71st in completions and hasn't thrown a TD in three games), and Iowa, well, don't get me started (74th in offense).

Not sure rampaging Oregon isn't the No. 1 team in the nation, however, or at least has a claim to it. Texas ranks first in the nation in scoring offense and 11th in scoring defense, the best two categories to measure a team.

A year ago, the Longhorns were cursed by a few percentage points spit out by computers.

But it appears all of the bad karma has been reversed from last year, when most believed the 'Horns had earned a spot in the national championship game by their play on the field.

The Horns are on a familiar road.

Call it the Pasadena Parkway, a unique road with many possible paths.

In Texas' case, the list of directions means the Longhorns can now reach the BCS national title game at the Rose Bowl without ever setting foot outside the Lone Star State.

Longhorns vs. the Ducks in the BCS title game?

Technically, neither No. 10 Oregon nor No. 3 Texas ever really left the Bowl Championship Series national title chase. Sure, the Ducks lost their first game of the season to Boise State, but one-loss teams from automatic BCS-qualifying conferences have advanced to the championship game several times. The Longhorns and their supposed Heisman Trophy-contending quarterback were unimposing for much of the season's first two months, yet they remained undefeated all the while.

Still, not until Saturday night did both squads emphatically remind college football followers why they deserve considerable mention in any national title game discussion.

The BCS race hasn't changed much this week.

The calendar turned to November, but college football's race for the BCS National Championship looks just like it did when the season started in the first week of September.

As expected, No. 1 Florida and No. 3 Alabama remain on a collision course for the Dec. 5 SEC championship game in Atlanta's Georgia Dome. No. 2 Texas remains the best bet to face the SEC champion in the Jan. 7 BCS National Championship Game in Pasadena, Calif.

If we play Kansas State for the big 12 championship, it could Colt McCoy's chance at redemption.

In some ways, a Texas-Kansas State finale would be ironic. And appropriate. K-State is the only Big 12 school that quarterback Colt McCoy has not defeated while putting together his 40-7 record as Texas’ starting quarterback. His mark against the Wildcats is 0-2.

Based on what the Longhorns showed Saturday in Stillwater, there is no reason for Texas to dread any matchup against a North opponent. But the key, as Brown stressed, is to build on the victory at Oklahoma State, not relax because of it.

Texas Third-Down Defense
Really, the ‘Horns have been fantastic on every down this season, but especially on third downs. Texas maintained its national lead in the category in Stillwater Saturday night, vexing Zac Robinson and forcing him into four costly interceptions. Two of those picks were taken backs for six, a common trend that’s developed this fall in Austin. The combination of the pressure being brought up front and the coverage in the secondary has opponents converting just 23% of the time on third downs.

What do the Wildcats know that other Big 12 teams do not?

The Sooners had no answers for Daniel Thomas, Brandon Banks and quarterback Grant Gregory, who have transformed into one of the most dangerous offensive trios in the Big 12.

Who'd have thunk it?

Anyway, K-State's ability to move the football and pile up points against Oklahoma is nothing new.

In the seven games the Wildcats have played against OU since Stoops' arrival in 1999, they have averaged 30 points. That's far and away more than any other Big 12 team have scored against the Sooners in the same time period, and it even includes a 35-point outburst by a Ron Prince-coached K-State team in 2008.

Todd Reesing will be the starter against Kansas State.

A few weeks ago, Mark Mangino took to the bully pulpit in the Big 12 coaches’ teleconference to extol Todd Reesing as a potential Heisman Trophy candidate.

On Monday, Mangino made the announcement that Reesing would still be his starter Saturday at Kansas State -- a decision that was up in the air after the senior quarterback was benched late in the Jayhawks’ 42-21 loss at Texas Tech last week.

What a difference three weeks can make.

OU is becoming a complete team.

Obviously, Oklahoma has been less than a complete team for much of this season. It's easy to be incomplete when Sam Bradford and Jermaine Gresham are on the sideline and the blockers and receivers surrounding Bradford's replacement and Gresham's replacement are not the same fellows who helped the Sooners produce more points than any team in college football history last season.

As a result, OU has been just good enough to get beat, losing three games by five points.

So, what happens when the defense finally has an off night?

Slow starts have been a problem for the Buffs.

CU has been outscored 64-27 in the first quarter this year, and the Buffs haven`t scored more than once in the opening quarter of any game.

It`s a trend that has the team and its coaching staff doing some soul searching. Several players have said some of their teammates have to find a way to play with more confidence. Meanwhile, the slow starts have frustrated fans believing coaches aren`t doing a good job preparing the team.

Robert Cessna has what it will take for the Aggies to return to the top 25.

What constitutes a Top 25 football program?  And what’s it gonna take for Texas A&M to become one? A&M hasn’t finished in the AP’s final Top 25 since 1999. You talk about facing an uphill climb — 66 programs have made at least one Top 25 finish in the 2000s. And barring a strong finish, A&M’s drought will reach 10 straight seasons. A slew of returning players and a favorable schedule next year could help the Aggies break into the Top 25.