True, the Snap Shots series has to this point been deployed to illustrate successes and failures from our own, but ESPN's Thanksgiving telecast gave us rare footage of an A&M Yell Leader attempting a Double-Axelcaneckaballoo, which only eleven Senior Yell Leaders had successfully executed on T-Sip Week in the past 120 years. 2009 Senior Sergeant At Yell Casey Shaeffer attempted it prior to this year's game... and became the twelfth. The 12th ManTM. Let's take a look: 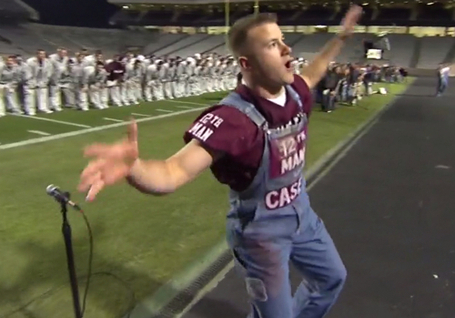 NOTES:  Shaeffer teases the crowd with the single-knee bend and loose fingers, with a slight give in the elbows and a three-quarters mouth bellow, the standard opening for a Hullaballoopty Doop -- a strong Yell, but one that every YL has mastered within 12 months of training.

But Shaeffer stuns the crowd when he brings in his hands and it's not the rifle salute, as would be the case if this were a Hullaballoopty Doop.... 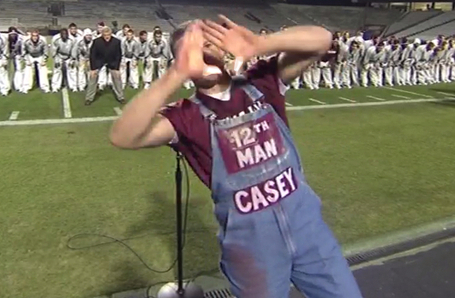 NOTES: It's a Diamond Double Down! Note the thumbs (highlighted above), perfectly spaced 2.5 inches apart at the base of the diamond, forming a shorthorns Down. A piercing whoop from all the Ags in the crowd, who simultaneously realize Shaeffer is gonna attempt the Double Axelcaneckaballoo! Shaeffer's balance is on his back leg as he sets for the first and most difficult part of the sequence. 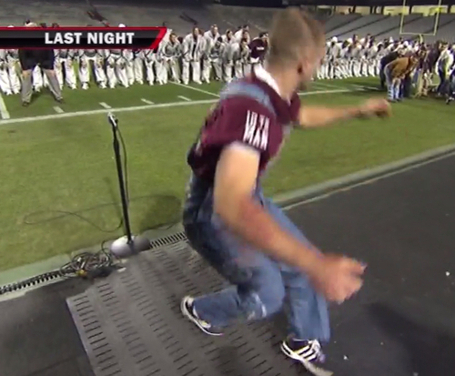 NOTES: You can see in the screen cap above just how much torque Shaeffer needs to execute this, as his hips trail his shoulders, which are neatly squared and balanced to perfection. He's got a shot at landing this. 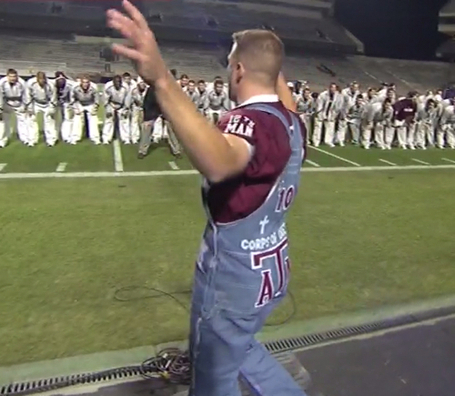 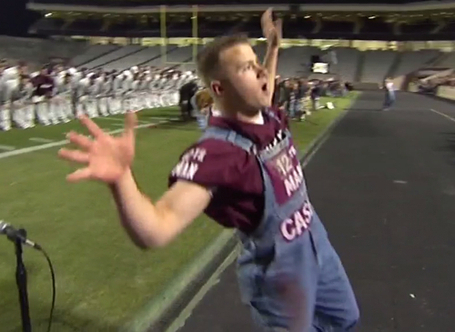 NOTES: As Shaeffer completes the rotation he transfers his weight to the back leg seamlessly, with utterly perfect 1.25-inch spacing between each finger. In the video you can see the finger-jiggles, which are a little tepid, but adequate, and only a fraction of a deduction considering the jump-turn he's just completed, not to mention the crouch-lunge he's about to attempt: 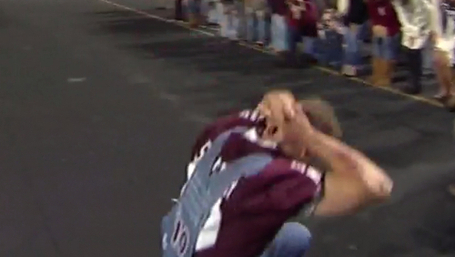 NOTES: Whoop! Effing nailed it, with ideal height and bend and -- by far the most difficult part -- interlocking fingers on the clasp-grasp behind his head. Where countless Yell Leaders have lost their balance and fallen forward trying belatedly trying to lock the fingers together, Shaeffer hits the valley of his jump with the fingers locked in place, allowing him to proceed to the all-important closing moves: 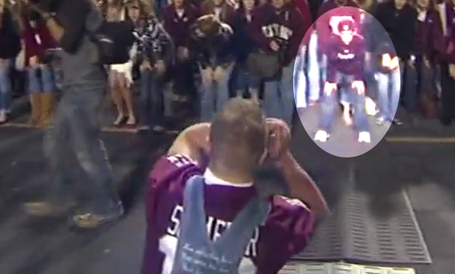 NOTES: This second-to-last shot is easily my favorite, showing the way Shaeffer uses his balance and body form to take the Yell to another level. Obviously, the side-cocking of the whoop-rifle is nicely positioned at his right temple, but it's the vision he demonstrates that just blows the mind. Shaeffer's spotted the eager Future Ag in the front row (who, it's worth noting, happens to be showing great form on the bend bellow -- future YL?) and just straight throttles him with piercing eye contact. If you think that kid has slept a wink in the 72 hours following Shaeffer's move, you don't know Aggieland. 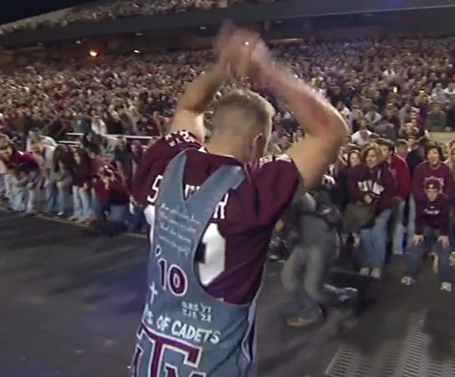 NOTES: As he bounces up from the crouch his vertical peak is textbook -- shoulders above his hips, whoop-rifle raised high, chest squared to the crowd. He's got it. This thing's in the books... Congratulations to Casey Shaeffer, for becoming the 12th ManTM ever to successfully execute the Double Axelcaneckaballoo.