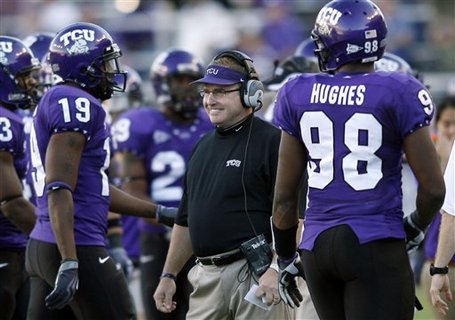 Who is the best team in Texas? The Longhorns or the Horned Frogs?

Most would say the No. 2 Texas Longhorns (8-0), but No. 6 TCU (8-0) looks more and more like a team worthy of Lone Star superiority. Last week, three Las Vegas guys who consider such things told Randy Galloway of the Fort Worth Star-Telegram their odds would be Texas by four, six and 10 points.

Do you know who Mike Tolleson is?

He may be the most anonymous/best assistant football coach in America, but you wouldn't know it, mainly because you don't know him. And won't.

Which is exactly the way Mike Tolleson likes it.

It's a wonder he even consented to a picture for the Texas media guide. Someone must have jumped out of the bushes and snapped it.

For the last dozen years, Mike Tolleson — if that, indeed, is his real name — has been churning out outstanding Longhorns defensive tackles as regularly as Hefner has Playmates, sans staples. And he's received next to no credit for it.

The Texas split end and tailback who are roommates watch the flicks in their spare time, what little they have when they're not practicing or playing football.

Johnson, the hulking running back, will cower in his seat. He's scared of poltergeists, vampires, demons, extraterrestrials and knife-wielding serial killers who lurk in the shadows.

And Williams, who admits that he, too, is scared of the apparitions and aliens, has the most fun making Johnson jump out of his seat and scream like a kid in elementary school.

Stop snickering. The Horns are very serious about Central Florida.

A run at a national championship can capture the imagination of a city. A state. A country.

A calm has settled over our fair city, friends. There isn't the nervous tension that accompanies a football team that's playing as well as any in the country. Maybe it's because this Texas team is a low-key one that prefers polite chest bumps to the locker room flow sessions Vince Young made famous.

Or it could have something to do with Saturday's opponent.

Hey, that's not a problem for us. UCF head coach George O'Leary is worried about the number of deep pass completions the Knights have given up this season.

He said that while Central Florida's defensive line has done a good job of rushing quarterbacks, the Knights' secondary has waited too long to try to break up deep passes.

"We're there to make a play, we're just not playing the ball," O'Leary told the Orlando Sentinel. "We're too involved with the man all the time. So that's been a big work point this week in practice."

Lots of love coming from Central Florida. The Knights are oozing with Longhorn praise.

"Texas has all the pieces in place to make run at the national championship from what I've seen on film," O'Leary said Tuesday. "They're stout on defense. They've got great quickness over there. I think, offensively, they've got great playmakers (and) a quarterback that makes good decisions."

So what is at stake in this game?

It's all about the BCS and poll position, and the Longhorns don't want to look sloppy after two dominant road wins. This game was supposed to be played in mid-September and Central Florida was supposed to be a tuneup for Big 12 play. The game got moved so Texas could play Texas Tech on national TV. 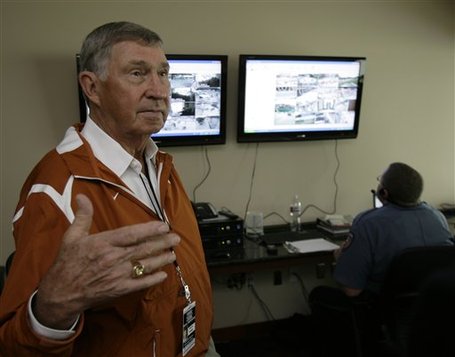 Be careful in DKR on Saturday. Big Brother is watching.

The defense has improved this year.

"They've stepped up and made big plays that we maybe hadn't made a whole of last year or early this year," head coach Mike Sherman said. "So, yeah, I think we're playing opportunistic football."

The Aggie's tentlike athletic complex is not up to code.

The analysis by Haynes Whaley Associates of Houston suggests that the McFerrin Athletic Center was built using a flawed design similar to that linked to the Dallas Cowboys' practice facility, which collapsed in May, injuring a dozen people.

The Aggies do not want to be home for the holiday.

Like most of us, Texas A&M free safety Jordan Pugh enjoys spending time with friends and family members during the holiday season. But he reached his limit last December.

The breaking point, Pugh said, came while exchanging holiday cheer during phone calls with friends who played for Texas, Oklahoma or other bowl-bound football teams.

"Hearing them talk about their bowl practices kind of made you mad," Pugh said. "I like being at home with my family. But I like playing in bowl games better than that."

Offensive lineman Patrick Lewis didn't get a scholarship offer from LSU so he became an Aggie.

"I was an SEC guy, and all the way through my sophomore year of high school, I just knew that I was going to LSU," he said. "But then I stopped growing taller, and they shied away from me. It took a while for reality to set in that LSU wasn't going to offer me a scholarship. I was heartbroken."

Almost two years ago, Lewis and his father, also named Patrick, were watching the 2007 Alamo Bowl between the Aggies and Penn State on television.

The OU-Nebraska rivalry has lost the drama.

Saturday's 85th Oklahoma-Nebraska game, one of college football's most historic rivalries, might best be described this season as the Battle of the Mediocre Reds.

Need proof? The last time both teams entered this contest still needing a win to become bowl eligible was long before six victories were even required to advance to post-season play.

Dez Bryant has the NCAA's decision. It is not good.

The Pokes still plan to compete for the Big 12 title.

Oklahoma State’s plans for winning a championship took a big blow Saturday in a loss to No. 2 Texas.

But the Cowboy players are in no mood to give up as they prepare to play a revitalized Iowa State team Saturday.

"There’s still a chance at a Big 12 title," said OSU offensive lineman Brady Bond. "The way the Big 12 has been played this year, there’s still a chance. We’re just going to play one week at a time and worry about what we can worry about. We can’t control how Texas plays. We’ll take it one game a week and we’ve got Iowa State this week so we’ll go from there."

Darrell Scott's teammates were bummed by his decision to leave Colorado.

"Guys are bummed," McKnight said. "Darrell was well-liked on the team. I’m close with Darrell. I was close with Josh. That was hard when he left, too.

"I was pretty caught off-guard by the whole thing. That’s how it is. When guys aren’t happy, they leave. That’s life. Hopefully it works out for him."

In recent weeks, Scott has sometimes stood by himself at practice with his arms crossed. McKnight said Scott was always kind of a quiet guy but well-liked by teammates.

Buff fans will be decked out in powder blue for the A&M game.

For Buffs fans, powder blue is the color of defeat.

It's the color of losing streaks, of (arguably) poor coaching, of lackluster fans.

It's the color that the University of Colorado Buffaloes football team wore from 1981 to 1984, when they won a total of 10 games out of 44.

Manhattan is a tough place to play.

When playing away from home, the Kansas State football team is unpredictable. It has lost big, lost close and won by blocking a late extra-point attempt.

But at home, the Wildcats are completely different.

When taking the field at Snyder Family Stadium this season, they’ve led almost from start to finish, played stingy defense and won all four of their games. Two by convincing fashion.

Kansas State has big plans. They plan to go bowling in December.

"The fact that we've played nine games and still have everything in the world to play for, that means a lot," Gregory said. "A lot of teams at this point in the season don't have a lot to play for. Maybe they go to a bowl, win a couple extra games.

"We're playing to try to stay alive in the Big 12 North and try to have a legitimate chance to win a Big 12 North championship."

Some things are going right for the Bears.

Baylor’s defenders would like nothing more than to bottle the momentum they captured in the second half against Nebraska, and maybe spike the Gatorade coolers with it this weekend.

But, in truth, they know better. The Bears recognize that it wasn’t any magic elixir that led to their feisty, turnover-creating effort versus the Huskers. Rather, it was just 11 guys fulfilling their own responsibilities.

"The whole second half, it looked good, but all we really did was do our jobs," senior defensive tackle Jason Lamb said. "That’s what happens when everyone is on the same page, doing what they’re supposed to do. So regarding trying to carry it over to the next week, we’re just going to go out there and do our jobs, a pretty simple thing.

It is Kansas-Kansas State hate week.

He's back. Tim Tebow leads the Heisman race this week.

The more unbeaten teams, the happier everyone is. Well, everyone meaning the BCS.

Imagine at least one undefeated school in five BCS bowl games. The ratings would be huge, controversy would rage, the Associated Press could even crown an independent No. 1 if it doesn't like the Florida-Texas outcome.

And the BCS would sit back and count the receipts.

It is my humble opinion that the football sports media of America so want an expanded playoff for college football they will produce story after story to vilify the BCS. Even members of Congress, who should be trying to solve our economic woes, are jumping into the fray but only when it involves a team from their home state. Most of the people in Congress don't know if the ball is pumped or stuffed. I do not buy this baloney that the fans must have the playoff. It's the media that wants it.

This guy is a college football fan.

Video of the 1929 Yale vs. Georgia game. It has nothing to do with the Big 12, but it is interesting to see historical footage of one of the greatest sports.  Thanks to About Them Dawgs!