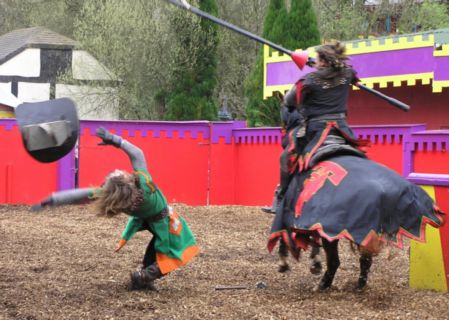 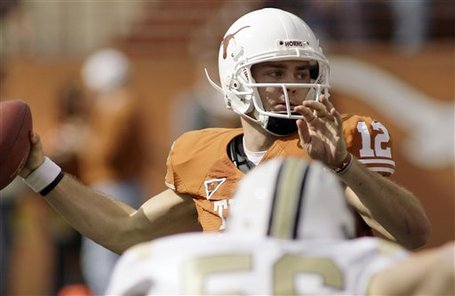 The Horns are all about sportsmanship...and not blowing our chance at an undefeated season. Mack Brown did the right thing by removing Colt McCoy from the game with nine minutes to play.

Given the choice of getting his quarterback a school record or playing it safe and sane, Coach Mack Brown and No. 2 Texas took the high road in a 35-3 win over Central Florida.

Brown said he decided against putting McCoy back in the game to show sportsmanship and because of the possibility of injury.

We wonder if any member of Brown's staff had input in the decision. The school record McCoy fell shy of is owned by Longhorns quarterback coach Major Applewhite, established in the 2001 Holiday Bowl against Washington.

Don't dare the Horns. You will lose. (Box score.)

The Central Florida defense dared Texas to beat them with the pass, especially the deep ball.

The Knights dropped their safeties and used their linebackers in a firm zone or on run blitzes, all in a futile attempt to upset the second-ranked Longhorns Saturday at Royal-Memorial Stadium.

Jordan Shipley gets a star.

Shipley almost doubled the offensive output of Central Florida by himself, with a Texas-record 273 receiving yards and one touchdown.

"We'd like to get him a seventh" year of eligibility, Texas Coach Mack Brown said of his sixth-year senior. "He just keeps playing so well."

Shipley isn't one for a lot of gushing praise or adulation.

In truth, Shipley never lets anything go to his head. He may be the most humble person on the entire team.

Why, in a span of a 10-minute post-game interview, Shipley thanked God for blessing him, McCoy for throwing him perfect passes, Malcolm Williams and Kirkendoll for opening up the field, Greg Davis for calling more plays downfield, the offensive line for giving McCoy time to throw him perfect passes, his father and grandfather for teaching him good sportsmanship and, I believe, his academic adviser, next-door neighbor and his eighth grade science teacher.

We have a sound running game. His name is Cody Johnson.

As Cody Johnson has become smaller, his role at Texas has grown.

Everyone is talking about the H-word.

Texas coach Mack Brown even dropped the "H-word" — Heisman — in reference to his starting quarterback, who threw for a career-high 470 yards in Saturday’s 35-3 rout of Central Florida.

But the heart of this triumph, just like the story of this undefeated season, rests in the shadow of Colt McCoy’s bloated passing line and Jordan Shipley’s 273 receiving yards, a single-game school record.

Sam Acho is a humanitarian. He has started an adoption program.

And he wants to add to it.

Texas defensive coordinator Will Muschamp focused this week in practice on the Longhorns getting more sacks. He joked with his team that the Longhorns were going to start an "adopt-a-sack" program.

The players took it to heart, spending all day in the Central Florida backfield during Saturday's 35-3 loss and sacking quarterback Rob Calabrese six times.

Sergio Kindle has grown up off the field.

On the field, Texas defensive end Sergio Kindle always has been considered a beast.

Off of it, the senior hasn't always made the best decisions.

He's received a DUI. He ran his car into an apartment building and left the scene of the accident.

He's been one of those guys you don't want your players modeling their behavior after.

But he took a step in the right direction last week.

Playing the Knights is just an excuse to post one of the greatest clips in comedic cinematic history.