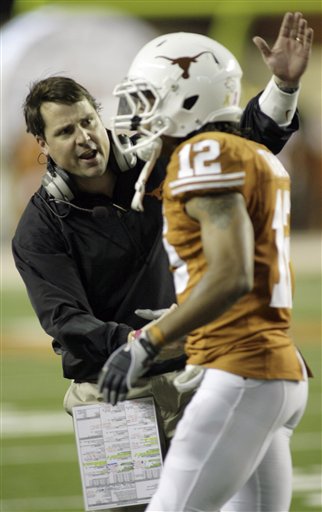 The Horns are currently No. 1 in total defense.

Will Muschamp is worth every bit of his salary. Somehow, he managed to lose Brian Orakpo and Roy Miller to graduation and yet improve this defense from somewhere in the Top 50 range to #1 with a bullet. I am simply awestruck.

Are the Horns really just playing against themselves the next few weeks?

By any realistic standard, Texas is playing against itself from here on.

And it should be noted that the 'Horns have consistently lost that battle -- three years in a row, Texas has entered November with long winning streaks and major goals intact, and blown games as a significant favorite down the stretch all three years.

Texas dropped to No. 3 in the BCS standings.

Nebraska looks like they are on their way to a possible North title. Should the Horns be concerned about the Cornhusker defense?

Given the upset, and the fact Nebraska’s surging defense shows no signs of letup, Dallas again looks like a probable December destination for Big Red fans hungry to return to the Big 12 title game. Indeed, these Blackshirts are a scary bunch. Perhaps even scary enough to make No. 2 Texas take notice.

For more on the game with Central Florida, see Sunday's Daily Roundup. 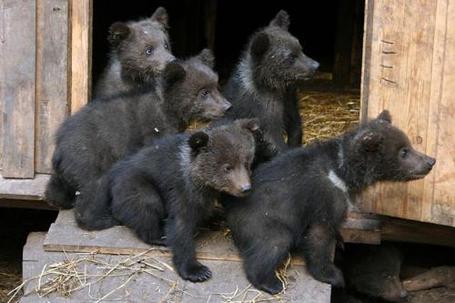 In case you haven't heard, the Bears beat Missouri. They came back from a 27-16 halftime deficit and won 40-32. It gets better: Baylor freshman quarterback Nick Florence (he was the third on the depth chart at the beginning of the season) passed for a school-record 427 yards and three touchdowns.

The Bears aren't dead yet.

"I know that people were kind of saying, ‘Oh man, we’ve got our third-string guy in there. The season is over with,’ " Pawelek said.

Turns out, Nick Florence has some game.

"Nick makes a lot of people believe," Baylor Coach Art Briles said. "He’s good with the football in his hands, he makes good decisions and he’s a rally guy. People kind of rally around him. He makes them feel confident. He did a great job."

One Baylor student attending the Missouri game summed up what the team is like without Robert Griffin:

"We had the talent, it's just he hid a lot of the deficiencies on the team," he said. "He made our offense go." 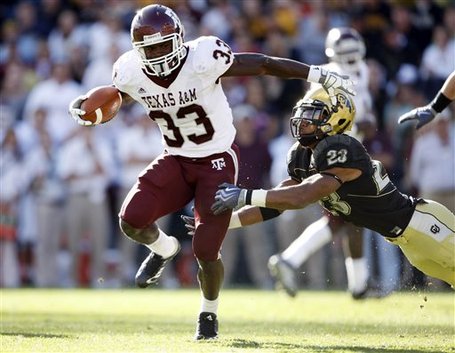 Boulder has been a problem for the Aggies. This season wasn't any different.

Johnson certainly didn't lose the game, but neither did he win it. That also goes for just about everyone else on the team. There was a lot of good, but not enough, so everyone will accent the bad.

"There were numerous things in the game [where] we had a chance," Sherman said. "Instead of kicking the field goal, we might have been able to score a touchdown. On the goal line [early in the game when A&M was stopped at the 1-yard line], we didn't get that. [We] missed a field goal, dropped a punt; there were different things in the ballgame, as well as tackling the quarterback."

Maybe the Aggies should just stay off TV.

Texas A&M will play on television in at least two of its final three regular-season games. Based on a recurring theme to a topsy-turvy season, the Aggies should try and pull the plug on the tube.

Simply, they tend to falter at any sign of prosperity — and especially on TV. Take Saturday. On a crystal-clear afternoon, the Aggies blew a 10-point fourth-quarter lead, as Colorado shocked A&M 35-34 before 47,227 fans in Folsom Field.

The conference will probably have more bowl eligible teams than bowls available.

For the first time since 2006, it looks like the Big 12 will only have one team in the BCS. That will cost the league millions of dollars, but result in a true bowl selection for the conference for a change.

No Big 12 teams have been eliminated from bowl contention. And it’s likely that if the conference has more teams than bowl slots, there’s a good chance that the conference should be able to fill another bowl or two, if needed.

Now here is a story you never thought you would see this year.

The conference will probably just have one team reach a BCS bowl. A year ago, in the Nov. 9 standings, the Big 12 had four of the top 12 BCS teams including three in the top five.

Beyond the top two teams this season, it's been messy, with inexperience, injury and an inability to manage success. Consider Oklahoma and Texas A&M, which meet Saturday. Each team could have become bowl eligible Saturday.

Nebraska is a nice state with really nice fans. And this is from someone in Oklahoma.

"There is no place like Nebraska," rings the first line of Dear Old Nebraska U., the Cornhusker alma mater.

Ain’t it the truth?

"The more you play up there, the more you understand they appreciate good football," said Stoops, who has been coming to Lincoln for 20 years with either Kansas State or OU.

"Even 2005, when we won, there were people applauding you. That’s their culture. That’s how they do things. It’s pretty neat."

Stoops is right. Class indeed is part of the Nebraska culture. "It’s something we’re very proud of," said Randy York, director of husker.com. "It’s not perfection, but it is sincere and it is overwhelming."

Sloppy play caused the Sooners loss to the Cornhuskers.

"We've had a similar script in the four scenarios that we have been on the wrong side offensively, and it's way too many negative plays," Wilson said. "The first thing an offense can do is beat itself and we have done things in four games that have cost us a chance to win all four games offensively."

Oklahoma's four losses have come by a total of 12 points, leaving Stoops disappointed that his team keeps making "foolish plays" that have kept them on the wrong side of tight games.

For three quarters, it was literally a pointless exercise for the Iowa State junior quarterback. He finally connected with tailback Alexander Robinson for a 45-yard touchdown pass early in the fourth quarter, helping the Cyclones avoid their first shutout in six seasons. But little else came easy in a 34-8 loss to Oklahoma State.

"You can't afford to start slow against the No. 18 team in the nation," Arnaud said. "For me and (center) Reggie (Stephens), it was just kind of getting back into the flow, and the biggest thing was the speed of the game."

Bill Snyder is making this all look way too easy.

When Snyder first took over the Wildcats, he competed against Tom Osborne and Bill McCartney, coaches who built national-title teams and routinely landed some of the nation’s top recruits.

Compared to Osborne and McCartney, Snyder’s primary coaching competitors today must look like Mo, Larry and Todd Haley to the architect of the Manhattan Miracle.

Kansas State is back on top in the state of Kansas.

It wasn’t that long ago that the Governor’s Cup lived in a Kansas State trophy case on a year-round basis.

Like he is now, Bill Snyder was the Kansas State football coach back then, and he recalls winning the hardware so many times that the award presentations following all those victories against cross-state rival Kansas became "matter of fact" for his players.

But for this group of Wildcats, who for the most part had never seen the silver prize up close before beating Kansas 17-10 on Saturday at Snyder Family Stadium, the experience was unparalleled. K-State players were so overjoyed to see the cup in their locker room that they climbed over each other to touch it. When center Wade Weibert got to the front of the line, he realized something special.

"It was kind of like, we’re the football school this year," he said. "We haven’t owned that title in the last couple years."

The BCS Guru has his thoughts on TCU's bold move into the No. 4 spot and digests all the games from Saturday.

It didn't turn out to be Upset Saturday exactly, but the BCS picture definitely became a bit more clear, if not quite crystal clear. This much we do know:

* It appears that a BCS championship matchup between Texas and the SEC champion, either Alabama or Florida, is all but inevitable.

* Iowa finally went down with a thud. However, the Hawkeyes can still win the Big Ten and earn a Rose Bowl bid by beating Ohio State next week in Columbus. If the Buckeyes win, they go to Pasadena.

TCU and Cincy may not like it, but that's pretty much the way it will play out.

The toughest tests have been passed, the tallest hurdles cleared for Texas, Alabama and Florida. For the second season in a row, an SEC vs. Big 12 matchup in the BCS championship games seems inevitable.

Florida and Alabama might even be able to stumble a bit down the stretch and still play for a national championship.

That's not really the way the BCS is supposed to work.

Don't like the BCS? It is time to do something about it.

Those SEC officials are back at their mischief again.

Stephen Colbert hates bears. And so do we, at least this week.