We do not want history to repeat itself.

Like Nebraska in 1996, the Longhorns are No. 3 in the country and one victory away from playing for a national championship. Like UT in 1996, the Cornhuskers struggled in the middle of the season, emerged as division champions almost by default, and have to venture into what figures to be a virtual home environment for their opponent. In the inaugural Big 12 title game, UT beat Nebraska in a stadium full of red in St. Louis. Saturday in Arlington, the crowd will be largely clad in burnt orange.

Will Muschamp takes responsibility for the defense's game against A&M.

"We’ve got to do a better job preparing our players, and that falls on me," Muschamp said.

After the A&M game, Muschamp berated himself for tweaking some coverage responsibilities during the short week before a Thursday kickoff that contributed to a missed assignment on a 70-yard touchdown pass on the Aggies’ opening possession.

"Those are things you can’t do. And that’s my fault," said Muschamp, who credited A&M quarterback Jerrod Johnson with hitting a second-half groove that kept the Longhorns guessing while Johnson rushed for 97 yards and passed for 342, with four touchdown strikes.

"We started trying to change our gaps to generate some rush. But we just couldn’t get him out of rhythm," Muschamp said.

One victory away from Pasadena.

For 12 regular-season games, along with daily practices and workouts, Texas has targeted one goal above all others.
Now the Longhorns are a single victory away.

Texas (12-0) can take the final step Saturday in the Dr Pepper Big 12 Championship at Cowboys Stadium. With a win over Nebraska, the Longhorns will cement a berth in the BCS title game which eluded them last season.

"This team's goal is to win all the games," coach Mack Brown said. "Their goals are to be conference champs and then they want to play in the last game of the year, and that's been since game one."

One more story for the BCS title game: Heisman snub.

So we need another subplot for the BCS games. How about Heisman Trophy Justice Part II?

The Longhorns claimed the 2005 season national championship by upsetting Southern Cal in what forever will be remembered as the Vince Young Gets Even game. Believing he was snubbed by not winning the Heisman (USC's Reggie Bush did), Young promised the entire state of Texas he'd compensate with a BCS win.

Mack Brown does not have the fondest memories of the 1996 upset of Nebraska.

Brown was coaching at North Carolina, where he had directed the Tar Heels to a 9-2 record. A strong finish had North Carolina fans excited about a potential trip to the Fiesta Bowl, which would have been the school's first trip to the Bowl Coalition.

But a funny thing happened for Brown and his team on their way to the desert. James Brown and Texas earned a stunning 37-27 victory over Nebraska, and both Big 12 teams -- not North Carolina -- went to the Bowl Coalition.

"Yeah, that game cost us the Fiesta Bowl," Brown said. "We're going if Texas doesn't beat Nebraska. I was mad. We're in and we're a lock. And then we go to the Gator Bowl."

Is McCoy in the lead for the Heisman?

Bo Pelini said the Cornuskers should have been in the title game last year.

An upset of the Longhorns at Cowboys Stadium in Arlington, Texas, would put Nebraska in a BCS bowl just two years after the Huskers hit bottom in Bill Callahan's final year. Some might say reaching the Big 12 title game puts Pelini's rebuilding job right on schedule.

"Well," Pelini said Monday, "it's behind schedule as far as I'm concerned because I was hoping to get there last year and it just didn't happen."

Say Suh has a game this week similar to the one he had at Missouri. Say he's McCoy's worst nightmare, sacks him a couple times and forces a turnover and the Huskers pull the upset. Is the Heisman dream a reality if that were to happen?

You can think about it. Suh says he won't.

"I could care less about the Heisman,"he said after Friday's 28-20 win against Colorado."It's a great honor,but (McCoy's) an offensive quarterback.Obviously,he's going to be up there.He plays for a great team and puts up great numbers both running and passing.But I don't think it's a statement game.I just want to go out there and win. That'll be my statement,if we go out there and win."

The Cornhuskers are ready for the challenge.

"I like our defense. I think we can match up with anybody. And they've got a heck of an offense, obviously. So it's just going to come down to execution." 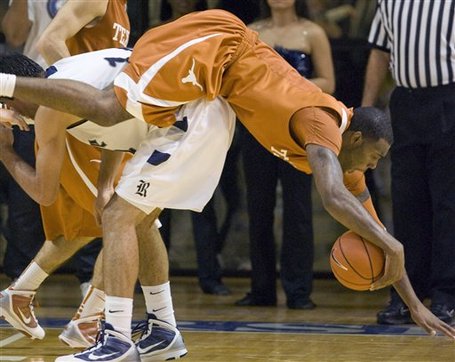 Dexter Pittman got to go home.

Dexter Pittman grew up in the Houston suburb of Rosenberg. But in the world of basketball, he’s pretty much done all his growing up in Austin.

To find evidence of that, all one needs to do is look at his performance in the six games the Longhorns have played in his hometown since his arrival at the Forty Acres. Tracking those six games tells the story of Pittman’s maturation on the basketball court.

On Sunday, Damion James made his mark in the record books.

During the victory against Iowa, James became the third player in UT history to record at least 1,000 points and 1,000 rebounds. He also is just the sixth individual in Big 12 Conference history to reach the 1,000 career rebound plateau. James currently has 1,383 points (No. 16 in school history) and 1,019 rebounds (No. 3 in school history) in his career.

Barking Carnival has a Rice post-mortem. 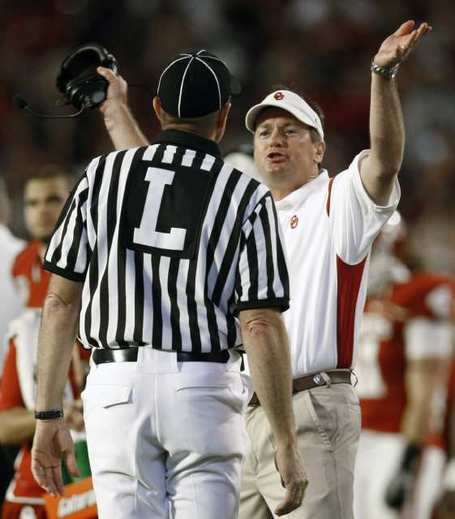 Bob Stoops said he intends to be in Oklahoma next year.

Oklahoma coach Bob Stoops appeared to leave no doubt Monday that he is not a candidate to succeed fired coach Charlie Weis at Notre Dame. "What I’m saying is I intend to be at Oklahoma," Stoops said in a conference call with beat writers. "I will never confirm or deny whether I talk or not talk to anybody. I won’t be interviewing for any jobs.

"What I'm saying is I’m going to be at Oklahoma next year. So, I can’t be in two places at once. If [athletic director] Joe [Castiglione] will have me, and President Boren, that’s what I’m going to do. Like I said, that’s where it’s at.

"What I’m saying is I couldn’t be more happy and pleased with what we’re doing here. Again, I’m not confirming or denying anything about Notre Dame or any other job. My point is this is what I love doing right now."

The Aggies are going bowling. The only question is where: The Independence Bowl in Shreveport or the Texas Bowl in Houston?

Remember Lou Holtz's great Notre Dame prediction at the beginning of the season?

The Fiesta Bowl will play a big part in the BCS line up this year.

If Texas wins Saturday's Big 12 championship game against Nebraska, the Longhorns will be the other team in the national title matchup.

With the Fiesta Bowl, under this scenario, losing its anchor team (Texas), the Fiesta's pick will set the agenda for the other bowls to follow.

"In our case, it looks like a target-rich environment, and that isn't always the case," Junker said.

The biggest issue this season? Too many dominant teams.

This season has sparked a recurring complaint, one that surfaced again following Week 13 scares from Texas and Alabama: There are no dominant teams this season.

There was a time earlier this year when I felt that way myself, but now, with the finish line just a week away, I'd argue this season has suffered from the polar opposite oddity: There are too many dominant teams.

From The Ft. Worth Star-Telegram...Who else? If Texas loses, BCS chaos ensues.