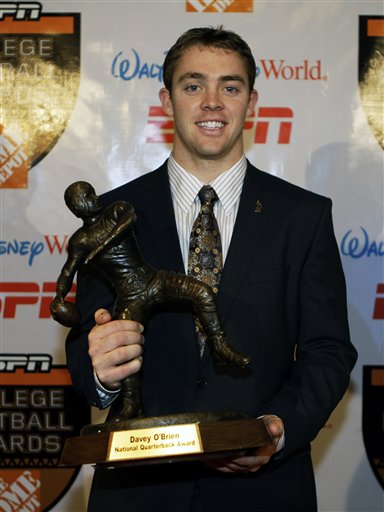 This has been a great year for the Longhorn's quarterback. Sporting News makes a case for McCoy's Heisman hopes.

Colt McCoy is all for a playoff.

"There's going to be two or three teams that are undefeated," McCoy said. "It's going to be hard not to argue that there should be a playoff system. That's not my call, but I'd be all for it."

But in this week of picking up trophies, he took some time away from the celebration to apologize to fellow Lombardi Award finalist Jerry Hughes of TCU for not knocking off Texas in the Big 12 championship game Saturday.

If Suh had not pressured Colt McCoy on the final play, McCoy might have accidentally run out the clock.

"I forced him to throw that ball away,'' Suh said. "I should have let him run around just a little bit longer.''

Just in case you want to hear some more about Texas vs. TCU, Barking Carnival has it all spelled out.

Does TCU deserve to be rated higher than Texas? I say, "No". TCU is very talented, but Texas is more so, as measured by All-Americans and draft projections.   Every computer rating that accounts for Margin of Victory has Texas rated stronger, and most that don’t count MOV do as well.  Mid-season, you heard much from TCU about them having a comparable strength-of-schedule to Texas. No more. By every measure, accounting for the full season, Texas has played a significantly tougher schedule than TCU.

TCU has played a few very good teams. They have not played against the award candidates Texas has (Gerald McCoy, Suh, Briscoe, etc.). The unranked teams in Texas’ conference still have more elite players than the unranked Mountain West teams. Like OU, which although unranked, is still calculated as a better team than TCU in Sagarin’s "Predictor" model.  The biggest crowd TCU played in front of was at Clemson (70,000). Texas played 10 games in front of more people. There are real differences between the two leagues.

Tyler Gabbert wants to throw the football 40 times a game. He senses Nebraska’s offense is moving farther and farther away from that. More power football. Less slinging it around.

"It definitely was a mutual decision," Gabbert said Wednesday. "I told him that I didn’t see myself playing at Nebraska in five years, and told him I wanted to look around a little bit. He was like, ‘Yeah, we understand that. I’m not going to make you come. You have to follow your heart. But if you’re looking around, we have to go our separate direction and look after our best interest as well.’"

Tickets are selling fast for the Pacific Life Holiday Bowl.

Nebraska and Arizona sold out their 11,000-ticket allotments for the game less than 48 hours after they went on sale. After that, fans of both college football programs raided the bowl’s local ticket office to snap up all but about 1,000 of the 6,000 that remained this week for the Dec. 30 matchup at Qualcomm Stadium.

Taylor Potts will start for the Red Raiders in the Alamo Bowl.

"I'm going to start Potts," Leach said. "He's steady and I need to settle on one and quit pulling them in and out, and then in the spring they’ll battle it out."

NewsOK has a Q&A with Sooner defensive coordinator Brent Venables.

Iowa State, Kansas, Missouri and Oklahoma State were recognized by the American Football Coaches Association for graduating at least 75 percent of their football student-athletes in 2009. 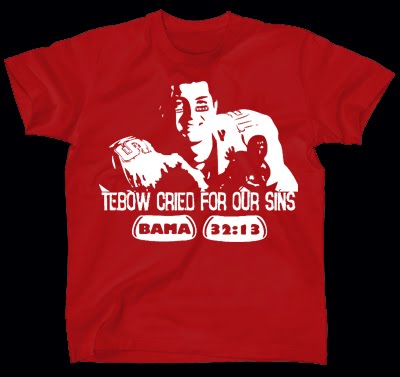 This is the hottest selling t-shirt in Alabama.

Carville finally came to a conclusion. "If I were advising the BCS, here's what I'd say," he said, pausing for emphasis. "There is a very famous story about when Lyndon Johnson was president. There was a disaster and then a meeting and one of his communications people was saying, 'You need to do this and that.' And LBJ turned to him and said, 'Son, you can't shine sh---.'" Carville paused. "And that's what I'd say to these guys: Some things just aren't spiffable."