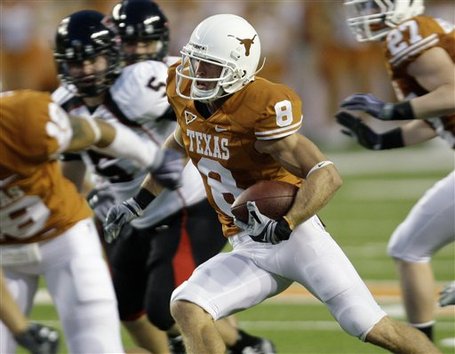 Sporting News has a Q&A with Jordan Shipley.

Pete Flutak has Garrett Gilbert listed as a 2010 Heisman candidate.

Remember, Vince Young couldn't be replaced, either. Gilbert might be the most talented quarterback Mack Brown has ever coached. 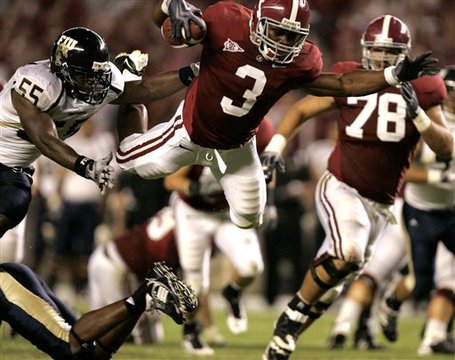 Six AP All-Americans is a record.

No team has had more since 1964, when the AP started selecting both an offensive and defensive team.


"You aren't going to have six guys make first-team All-American unless your team is playing at a high level week in and week out. It's a credit to our entire team and our coaching staff." 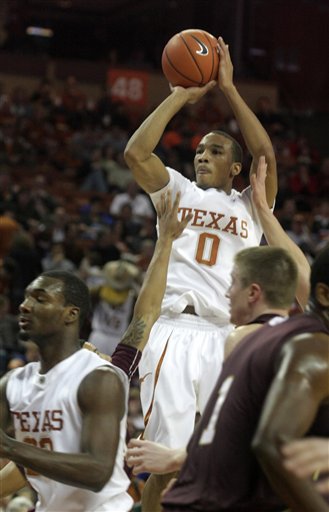 Avery Bradley is finding his place.

Avery Bradley's coach never brings it up and says he doesn't even think about it. Bradley's teammates insist it's not an issue.

But as much as the Texas Longhorns would like to believe their most touted freshman guard is just like any other newcomer and as much as Bradley commits to the idea that his own success should be judged simply by whether the Longhorns win or lose, he realizes others don't see it that way.

SI's Luke Winn gets a Q&A with Dexter Pittman.

LW: I wanted to ask you about a few Tweets. One said that you had Twitter activated on three phones. Really?

DP: I love phones like women love shoes. Even if they're not on -- I just want to have them around. I'm known on the team to have the best phones. Like, if the iPhone is out, I get it before any one of my teammates. And then they be getting on me, like, "Man, you change numbers more than anybody I know! I'm not even saving yours in my phone!" I have the iPhone right now, but I love Blackberries, so I got the Storm and the Curve, and I don't know which one I want to give up yet. 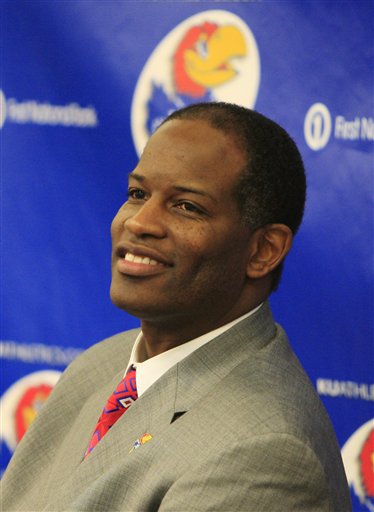 Turner Gill is bringing in some impressive assistants.

"That staff that will be here is second to none," new KU coach Turner Gill said Monday as he unveiled some of his plans.

In Chuck Long and Carl Torbush, the Jayhawks have assistants who were more successful as coordinators than head coaches, and that’s what Kansas needs as it looks to 2010 with a team that loses three senior starters plus junior Dezmon Briscoe on offense and five seniors on defense.

Along with Long and Torbush, Aaron Stamm will join the staff from Buffalo. Stamm was the Bulls’ special-teams coordinator and tight-ends coach.

Someone did not like the Gill hire at Kansas.

The president’s spokesman put the decision to retain Hawkins completely on Bohn and chancellor Phil DiStefano, saying it was made totally at the campus level.

I’ve heard otherwise. I’ve been told by people I trust and who have given me good information in the past, that this was a decision made by Benson in order to preserve some credibility in lobbying the state for more money for higher education. They say Benson didn’t want to face critics who would have asked how the school could afford to pay a coach $3 million not to coach but needs to cut classes or professors or janitors unless it gets more money from the state. The president’s spokesman says that just isn’t true.

If Notre Dame isn't interested in becoming the 12th member of the Big 10 Conference, a Big 12 team may be the next choice.

I would think that Missouri would be the most potentially desirable of the Big 12 schools because of its population and growth potential as the single football-playing school in the state. Missouri is the 18th largest state in the country according to 2008 population estimates with 5.91 million people. It would be an inviting market for the Big 12.

Nebraska would bring greater natural cache because of the traditional excellence of its football program, but would bring little extra population or additional football viewers compared to the other schools. It ranks 38th nationally with a population of 1.78 million. Iowa State would bring even less because the Iowa market is already saturated by Iowa for the Big Ten as it is. 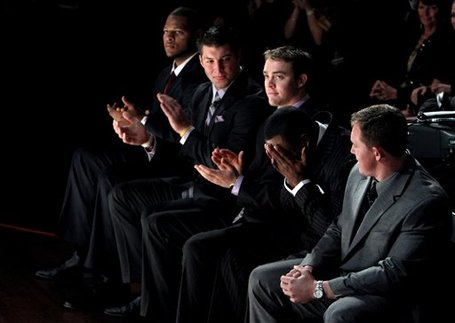 Forbes looks at the Heisman vote.

Texas quarterback Colt McCoy's third-place finish was one of the strongest ever. McCoy received 1,145 points and was 159 points behind Ingram. McCoy's point total was third-most for a third-place finisher and only three players to finish third were closer to the winner than McCoy.

The Heisman Pundit breaks down the voting by region.

If Nebraska had beaten the Horns, Brian Kelly would might still be at Cincy.

"Who knows what would have happened if Nebraska wins that game," Kelly said on "The Afternoon Saloon" on ESPN 1000. "I might not be here at Notre Dame because we don't know if they would have waited for me, because I was going to play in the national championship game."

In case you can't afford to go to Pasadena, how about Shreveport?

The majority of A&M’s tickets are selling for $35 — student tickets are $30 — so that’s only a $5 increase from nine years ago when the Aggies played Mississippi State in Shreveport. That’s a 16.7 percent hike if my Pennsylvania math is right, which is still less than 2 percent a year. Not bad.

Hoping to beef up policies for handling concussions, an NCAA panel is recommending a new rule that would sideline an athlete for at least the rest of the day if he or she loses consciousness or shows other worrisome symptoms during competition.

The rule, which would affect all NCAA sports, comes from the NCAA Committee on Competitive Safeguards and Medical Aspects of Sports, which wrapped up a three-day meeting in Indianapolis on Tuesday.

The panel also recommended sidelining an athlete with less severe concussion-related symptoms until cleared by a doctor.