It is going to be one big explosion on Saturday.

The defense is mad. Really mad.

Brown said he was encouraged by the postgame responses from defensive coordinator Will Muschamp and players after watching A&M score 15 more points than any other Texas opponent this season.

"The defensive staff was over here early Friday morning. They worked Friday and Saturday," Brown said.

Texas’ players had those days off before returning for a Sunday team meeting. As they reviewed tapes from the A&M game, Brown said his defenders "were not happy, which I like. They’re happy we won, but they understood it wasn’t good."

Colt McCoy is having a great time.

"The gunslinger mentality McCoy displayed in 2008 has returned," wrote ESPN analyst Todd McShay, "and the Texas offense is humming as a result. His performance on Thanksgiving night was one of the most memorable moments of the season. ... a strong showing against Nebraska in the Big 12 title game could earn McCoy the Heisman Trophy."

McCoy has been in a playful, light-hearted mood for the past six games, as the Longhorns have averaged 44 points while winning by a margin of 31.

Mack Brown wants to see just the Horns are.

"I think that lack of performance will get our attention for this weekend," said Brown, who noted that his team missed 13 tackles against the Aggies and had a lot of communication issues. "We probably did too much (on defense). We'll go back and be who we are this week."

Nebraska may be the best defense we have seen this year.

Texas quarterback Colt McCoy called Nebraska’s defense “really stout” and said the Blackshirts will be “one of the best defenses we see this year.”

Brown is, if anything, consistent.

Texas owns Nebraska. Not the old Nebraska, the new one. Make sure you don't get those two confused.

"Our situation has worked out perfect," Brown said. "Will's young and he and I had an understanding. He wanted to be defensive coordinator. We paid him like a head coach. ... Our lines of responsibility have not changed a bit. ... The agreement that Will and I have is, as long as I'm the coach and he has a question, he comes to the office to discuss things. The day that I step out it's his."

The impressive play of young Burkhead should excite fans as his versatility will be needed if Nebraska plans on pulling off the upset against Texas on Saturday. Burkhead's ability to get low to the ground and get behind offensive lineman not only makes him tough for defenders to find, but his deceptive strength gives him the bruiser capability that Nebraska has lacked since the departure of Quentin Castille.

Bo Pelini is not into any gimmicky defenses. He is going with what he knows.

He said the Huskers will stick with the strategies that have gotten them this far and will "let it all hang out" on Saturday night at Cowboys Stadium Arlington, Texas.

HuskerExtra thinks our defense is showing some weaknesses.

Suh is so sure in his team's chances to win in the Big 12 title game that he told reporters he doesn't even consider his team as an underdog. 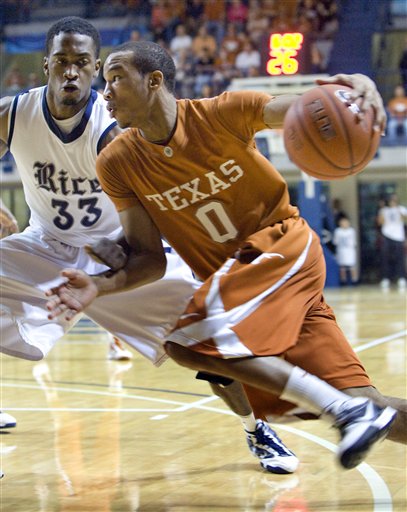 Rick Barnes was not pleased.

But head coach Rick Barnes is not pleased with much, particularly after Sunday’s 77-59 win at Rice, a game which the Longhorns led by just five points with six minutes left.

"We are trying to create an identity," Barnes said. "We took a step back at Rice. We didn’t pressure the ball (on defense) the way we need to. We didn’t help each other. We haven’t executed offensively this season."

Get a $3 end court mezzanine ticket to the USC game this Thursday with the donation of a new unwrapped toy for Orange Santa.

Dan Hawkins was humbled by his 3-9 season.

The Buffs finished 3-9 this fall after beginning the season talking about winning 10 games after Hawkins challenged his players to meet that mark. Questions about Hawkins' future with the program lingered all year until Thanksgiving Day when the school announced he would be back for his fifth season in 2010.

"I know for me, it's been humbling," Hawkins said. "This whole thing has been humbling. That's not all bad for a person to have to kind of go reinvent yourself."

Sources say Oklahoma State and Mississippi will be playing in the AT&T Cotton Bowl Classic played at Cowboys Stadium on January 2, 2010.

The Big 12 just wasn't that impressive this year.

Supposedly, the Big 12 was ready to challenge the SEC's reputation as the best college football conference. Having come woefully short of that, maybe next year it can set its sights on catching the Big East or even a non-BCS conference like the Mountain West.

Bob Is happy in Norman and he does not plan to leave.

"I’m going to be at Oklahoma next year,” Stoops said Monday. "If (athletic director) Joe (Castiglione) will have me and president (David) Boren, that’s what I intend to do.”

Besides, Bob hates sports writers and the media glare. Notre Dame would be a nightmare.

Here’s what Bob Stoops didn’t say Monday when he said for the umpteenth time that he is happy at Oklahoma and he isn’t interested in Notre Dame. Stoops is impatient dealing with the handful of beat writers who cover the Sooners. The very last thing that Stoops would choose to do is dive into the fish bowl that serves as the home and office of the Notre Dame head coach. I can’t think of a job he would like less.

Gary Patterson will be at TCU for quite a while.

Coach Gary Patterson and TCU have agreed to a long-term contract extension, the university said Tuesday.

Patterson is in his ninth season as the Horned Frogs' head coach and in his 12th season overall.

Dennis Franchione may be back.