The brilliant analysts at ESPN talk about the national championship game.

Everything is big in Texas. Especially wins.

You think they win big at Alabama? They win bigger at Texas.

The Crimson Tide has won 811 football games in its history. That ranks sixth on college football's all-time list.

Alabama has won 72 percent of its games. That also ranks sixth in the nation.

If Texas is a candidate to leave the Big 12 and join the Big Ten, it's news to men's athletic director DeLoss Dodds.

"We've not talked to anyone about it," Dodds said before Texas' 103-90 win over North Carolina at Cowboys Stadium. "We're a member of the Big 12. We helped put the Big 12 together. It [the Big Ten] is a long ways away."

Colt McCoy warned his dad not to let Case go into Texas coach Mack Brown's office on a recruiting trip. He knows that hard sell better than anyone.

Sure enough, Case McCoy went into Brown's office. He didn't make it back out before reaching the seemingly insane conclusion that it would be a good idea to follow his brother to Texas.

"I was happy and I was elated because there's no place I'd rather him go," Brad McCoy said. "But I just really couldn't believe he did it right there. Colt was right. He said, 'I told you he couldn't do it. Too much pressure."'

Barking Carnival has an Advent Calendar: 18 Days to Bama. 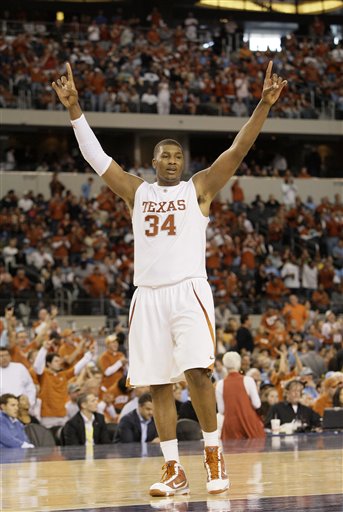 Thanks to those two, Texas outrebounded the Tar Heels 60-41 and outscored them 27-11 on second-chance points.

"We have a great front line," James said after the Longhorns improved to 10-0. "I think it's the best in the country."

What a game. But Rick Barnes wasn't happy.

It was typical, generic coach-speak in an effort to temper the expectations.

But this Texas team is pretty darn good right now.

Rick Barnes and Roy Williams had a different opinions of Texas' defense.

Texas coach Rick Barnes was upset with his team's defense after North Carolina shot 58.8 percent in the second half.

All the Horns are flying under the radar.

But then, for a second-ranked team, neither have the undefeated Longhorns (8-0).

And no one really knows why.

Asked why he thought people have undervalued his Texas team, James shrugged his shoulders.

"I don't know," he said. "You'd have to ask them but I do wonder, what do they think of us now? I know how good we are and I think maybe we even deserve to be …"

Gary Parrish has noticed the Horns.

It's possible to show you're capable of being in the national championship game, possible to show you're good enough to win it all. And that's exactly what the Longhorns showed Saturday during their 103-90 victory over North Carolina that drew 38,052 fans, among them former President George W. Bush, who after all these years finally found those weapons of mass destruction.

Turns out, they belong to Rick Barnes.

They were used to destroy North Carolina.

"I think we showed we're a great team," said Texas point guard Dogus Balbay. "And we're going to continue to show that."

Pittman, the Longhorns’ 290-pound center, will corner Barnes in the locker room or pull him aside on the practice court and ask for tips on how to improve his game.

"Coach," Pittman has said countless times, "how can I get better?"

Barnes was always ready with an answer – until last week, when the normally poised coach unexpectedly snapped.

Barnes pushed Pittman until he found the inner toughness that seemed to have been lacking all those times when he asked for a substitute late in games or missed foul shots because of fatigue.

Texas outside hitter Destinee Hooker couldn't sit down, she wouldn't.

Having been so close to another national championship, sitting down would represent an ending. Her teammates were already sitting, slumped over and exhausted from their hard-fought loss. But Hooker stood.

It was almost as if she couldn't believe one of the most brilliant careers from a Texas Longhorn could end like this. But it did.

The Tuscaloosa News and Roll Bama Roll look back at the 1982 Cotton Bowl.

Most teams headed to a postseason game break for a few days, then reconvene at the bowl site for final practices and pre-game festivities. Subsequently, the NCAA offers a set dollar amount for players who travel individually, and they're allowed to pocket the difference between that number and the actual cost of the trip.

This time around, though, 'Bama captains weighed the break and the cash against the cost of splitting up the team and burdening players with the logistics of connecting flights, delays and other holiday travel hang-ups in the middle of preparations for the BCS Championship game on Jan. 7, and decided they'd rather stick together than get paid.

Should A&M's quick tempo offense be a concern for a fast SEC team?

"We hear that the tempo is even faster than what Auburn is doing," Richt explained. "When you watch film and you'll see a play where the defense is scrambling to get line up and the ball is snapped, you know they're going fast. Most defenses can get lined up on a pretty good pace, but they're doing some things where they are going so fast that defenses are having a very difficult time to get lined up quickly."

McCoy told the Tulsa World in November that he already had made up his mind to leave because he recently ran a degree check and discovered he would finish the fall semester six hours short of a degree in human relations.

"Graduation was my main goal," McCoy said Friday in an OU press release, "and once I knew I had that accomplished, I wanted to look at playing in the NFL."

A bowl game in Oklahoma?

Is the Big 12 headed for a Heisman slump?

The Big 12 has carved an enviable niche in Heisman Trophy balloting in its short history.

With Colt McCoy's third-place finish and Ndamukong Suh's fourth-place finish last week, the Big 12 has had a top-five finisher in 11 of its 14 seasons of existence.

Included in that mark are winners like Ricky Williams in 1998, Eric Crouch in 2001, Jason White in 2003 and Sam Bradford last season. Additionally, the conference has had six players who finished second and two others who were third.

Despite that history, the early prognosis doesn't look good for duplication by the Big 12 in 2010.

The Kansas City Star has a great profile article on Turner Gill.

In the spirit of the season...