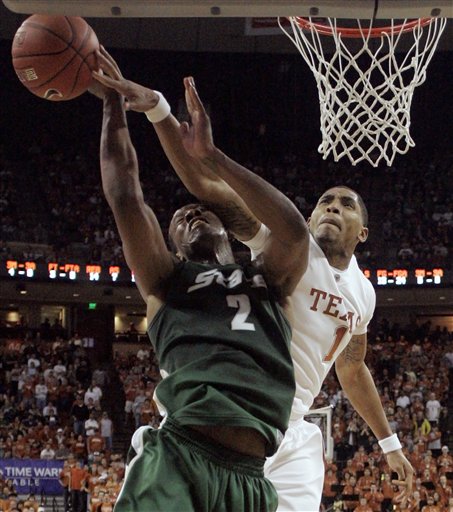 The Horns took out No. 9 Michigan State. (Here's the stats.)

Damion James had 23 points and 13 rebounds, leading No. 2 Texas past No. 9 Michigan State 79-68 on Tuesday night, giving the Longhorns consecutive wins over Top 10 teams.

Like the victory over No. 10 North Carolina on Saturday, James led this one. He followed his 25 points and 15 rebounds against the Tar Heels with another big showing to rally the Longhorns (11-0) from an early deficit.

"As good as he is, I think there is still a lot of growth for him at UT," assistant coach Rodney Terry said.  "I don’t just mean with basketball."

"Once a player enters the draft, they enter a tough business. Dexter just wants the time to mature a little bit more.  And he is really using this season to get a better understanding of the game," Terry added.

Pittman cites the opportunity for improvement in all areas as his major reason for remaining at UT for his senior season.

"I chose not to enter the draft because I wanted to come back to Texas and get even better. I’ve really improved my conditioning," Pittman said.  "I also want to become one of those great college players."

It is never too early to start projecting the field.

That is how well Barnes balances his world.

He's so slick, no one sees him as slick.

The Texas-North Carolina game is the highest-rated and most-viewed men's college basketball telecast this season across all networks.

Just had to throw this in. Always nice to hear about problems in Norman. A temperamental Sooner may cause issues for Jeff Capel.

Merry Christmas. It is good to be the king.

Football #2, playing for a National Championship.

Basketball #2, playing another Top Ten team in a meaningful game in December at home in front of (what should be) a noisy, sellout crowd.

Baseball #1 in the pre-season Top 25 rankings.

Beergut over at I Am The 12th Man is thinking. This cannot be good.

texas reinstated WR/KR D.J. Monroe after he pled down to a lesser charge of obstructing a passageway, and the driving while intoxicated charges were dropped. Hell, we all know that is an equal charge; obstructing a passageway puts lives in danger just as badly as an underage kid driving around while so drunk he is impaired. The best part is Mack Brown's statement to the media:

"I had a long talk with D.J. yesterday," Brown said. "We looked at the punishment he had, what will affect them in 15 years and what it does to the attitude of the team. And we felt that a three-game suspension for the charges that were dropped, that he should be reinstated."

Brown might as well have said, "We looked at how badly we might need him for the BCS Championship Game, and decided to reinstate him." I'd respect Brown more if he stood by his earlier punishment.

Hey, Bo. An apology would do. The Big 12 will not fine Bo Pelini for his less-than-classy remarks after the championship game.

"The comments reportedly heard by reporters outside the locker room were made while players and coaches were exiting the field," Osborne said. "Some comments were reported as coming from behind a closed locker room door and lacked specificity and point of origin."

Muschamp learned a lot during his time with Saban. While he jokes there will be a lot of "wasted ink" written bout their relationship over the next few weeks, he remains grateful for the opportunity to join Saban's staff nine years ago.

"When you get there and get exposed to a lot schematically, that appealed to me," Muschamp said. "And that's obviously where I formed my ideas about how you play and the things you needed to do to be successful."

"They come in here and aren’t just about getting us accolades on the field or keeping us eligible," Gideon said. "They are here to get us a degree and get us out of here with something besides football memories. I feel that's the most important thing to Coach Brown since I’ve been recruited and still is now. I think he deserves every bit of it."

Texas coach Mack Brown has latched onto the underdog role, and he’s running with it.

Presumably all the way to Pasadena

The Horns are tweaking some things before the showdown with Alabama.

For the players on offense, the practices have been about correcting what happened in the Big 12 title game, which was for them a night of worsts.

Texas gained only 202 total yards, the fourth-worst output in Brown's 12 seasons at UT. The last time the Longhorns were held to fewer yards was in 2000.

The points — one touchdown and two field goals — were the fewest the Longhorns have scored since Nov. 24, 2006, when they lost to the Aggies, 12-7. The offensive line struggled the most, allowing the Cornhuskers to sack McCoy nine times.

Offensive coordinator Greg Davis said there would be "tweaks " but nothing glaring. "At 13-0, we're not going to reinvent ourselves in a month," he said. "But I do think we have to be smart enough to tweak some things."

The Crimson Tide is good at avoiding penalties.

While there aren't too many statistical gaps between the two teams in the Jan. 7 BCS national championship game, one jumps off the page.

Texas has been penalized for 180 more than yards this season than Alabama. The Longhorns rank 81st nationally in penalties committed per game. The Crimson Tide is 17th, having not had more than five penalties in a game since October.

Nick Saban is cleaning out the clutter.

Nick Saban wants all the so-called "clutter'' removed from the heads of No. 1 Alabama's players.

That includes Mark Ingram's Heisman Trophy and Rolando McClain's Butkus Award. Not to mention the SEC title and the biggest clutter of all: The Crimson Tide's upcoming game against second-ranked Texas for the BCS national championship on Jan. 7.

I hope you get everything on your list this year.

The Daily Roundup will be back on December 28th.