The game could be sweet revenge.

After quarterback Colt McCoy was passed over for the Heisman Trophy recently, Davis typed out the same message he sent to former Longhorns quarterback Vince Young in 2005 when Young finished second to Reggie Bush. He wrote that, in his book, the quarterback was a Heisman winner.

McCoy, who had heard the story, responded the same way as Young.

The Horns are definitely the underdogs.

Thanks, but no thanks. The Sooners are now lecturing Mack Brown on player issues.

The Crimson Tide does not want a repeat of last year's Sugar Bowl.

Alabama's national championship dreams were crushed, and only a matchup with an unbeaten team from a more lightly regarded conference awaited.

The current scenario is completely different from what the Crimson Tide faced in last season's Sugar Bowl against Utah. No crushing disappointment or crippling suspensions (so far). And no watching the BCS national title game on TV.

Yes, Greg McElroy was in the running for a scholarship offer from Texas.

"I got a pretty good look from them," he said.

No, McElroy was not invited to sign with the Longhorns. Apparently his running ability was a draw­back.

"They wanted a more mo­bile guy," he said. "They were real honest with me.

Did you know that Alabama is still on probation?

A number of you have asked the question because you've read the fine print at the bottom of the USA Today coaches' poll, which is part of the BCS formula.

What took you so long?

The fine print says, ``The AFCA prohibits coaches from voting for schools on major NCAA probation.''

Alabama is on major NCAA probation thanks to Textbookgate. The decision came down June 11, although the school has appealed the sanctions, which include vacated football victories.

Alabama is No. 1 in the USA Today poll and No. 1 in the BCS rankings and will play No. 2 Texas for the BCS championship.

They probably wouldn't fight this hard for South Park. Three congressmen are worried that the BCS title game will not be shown in their home districts.

In their letter to the FCC, the three lawmakers — Sen. Jeff Sessions, R-Mobile; Sen. Richard Shelby, R-Tuscaloosa, and Rep. Jo Bonner, R-Mobile — asked the FCC to take "appropriate action to ensure that major sporting events such as the BCS National Championship are not held hostage during failed retransmission consent negotiations" as they point out that "thousands of Alabamians will lose the opportunity to watch the Crimson Tide". 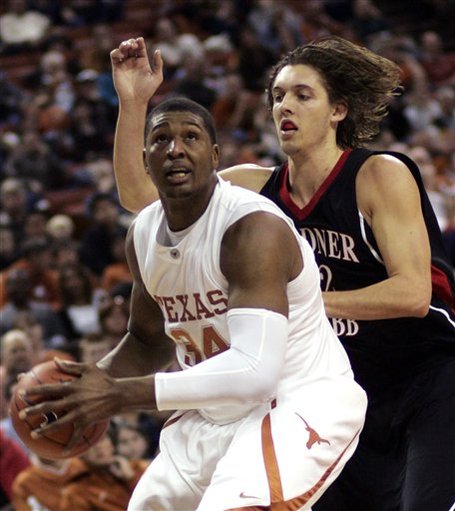 This is a must-read. In case you missed this story about Dexter Pittman posted on BON, here it is.

Putting off the NBA for a year may pay huge dividends for Damion James.

"I think that when Damion came here, Damion thought he'd be one-and-done," Texas coach Rick Barnes said Tuesday night after a 79-68 win over Michigan State. "And I don't think any of the other players we've ever recruited thought that."

Not even Kevin Durant?

"No," Barnes answered. "Absolutely not. ... But Damion has one thing in mind: He wants to take care of his family. He's always said that from Day 1. It's been the most important thing. He even said this year at one point in time that his biggest disappointment is that he hasn't been able to take care of his mother yet."

Now that I’m an adult I get to blurt on Twitter. So last night while I was watching Texas defeat Michigan State 79-68 in Austin, I blurted out that the Longhorns right now are reminding me of a certain team: "Texas 2010 is Memphis 2008: Prohibitive D and hideous FT shooting."

Last night’s game against the Spartans certainly gave me ample cause to blurt that out. The ‘Horns held Tom Izzo’s team to 68 points in a 75-possession contest, but shot just 8-of-19 from the line. (Meaning, from Michigan State’s perspective, this game was something of a missed opportunity. Dexter Pittman, limited to just 12 minutes by foul trouble, was a total non-factor and Texas’ FT shooting was even worse than usual.) But was I really on solid ground with this comparison?

I decided to find out.

Prima Donna: A vain or undisciplined person who finds it difficult to work under direction or as part of a team.

More problems in Lubbock. First Mangino at Kansas and now Leach. It is going to be a very messy divorce.

As details continued to emerge Monday afternoon in the wake of Texas Tech's decision to suspend Leach indefinitely, the possibility arose that this will not end well for Leach or for Tech.

At the moment, you'd have to think Leach will continue at Tech, where he has more wins than any football coach in school history. Then again, 24 hours ago, who saw this coming?

By suspending Leach for a bowl game, the administration has brought everything to a boil. Leach's attorney, Ted Liggett, indicated that he was strongly considering legal action to have Leach reinstated for the bowl. Phone calls to Lubbock all-sports radio station KTTU were heavily in favor of Leach as news broke Monday afternoon.

There's also a question of timing. Leach's contract calls for him to receive $800,000 if he is the Tech coach on Dec. 31. And the indefinite suspension imperils a recruiting class ranked 24th nationally by Rivals.com.

The Aggies lost to Georgia.

But don't let the scoreboard fool you. It wasn't the Texas A&M defense that sent most of the Aggies faithful -- a bunch that made up at least two-thirds of the 49,653 in attendance on a chilly Monday night -- streaming out of the stadium early.

Blame the special teams. What was a close, defensive battle turned on the Aggies' inability to make key plays when the offense and defense weren't on the field.

If the score wasn't bad enough, then there's this. The Bulldogs had two graduate assistants filling in for fired coaches.

After Mark Richt fired coaches Willie Martinez, John Jancek and Jon Fabris on Dec. 2, someone had to fill in.  Hartley, 24, and Doolittle, 25, were in the right place at the right time. Doolittle spent the month coaching the linebackers, Jancek’s old job, and Hartley the defensive backs, part of Martinez’s old job.  Yesterday, Doolittle was on the field, joining Rodney Garner, the only defensive coach still on staff, in calling defensive plays. Hartley was upstairs in the coach’s box, where Jancek used to be stationed.

"I was telling some of the guys, ‘Look, this is my last day as a full-time coach. Tomorrow I’m a G.A. again,’" Hartley said. "It was an unbelievable experience."

The Cornhuskers are still looking for that elusive offense.

For most of the ’70s, ’80s and ’90s, the Nebraska football program stuck to the same straightforward strategy.

It seemed so simple: Just run it.

Today, the Nebraska offense is known as something else. And it’s hard to say exactly what.

All anyone needs to know about Iowa State football in 2009 is that I’m writing this year-in-review column poolside from Arizona.

This was a good year for Cyclone nation: 2009 was the year hope was restored, and not just for ISU football, but for its men’s basketball program as well.

Brian Orakpo made the Pro Bowl roster as a reserve outside linebacker.

Thank you, Lamarr. No, we don't have any sympathy for the Horned Frogs.

"Well, we're going to the national championship, nothing else really matters," Texas senior defensive tackle Lamarr Houston said. "People can say what they want, but who's going to the game? There's no point in even talking about it. We don't even play them so it's not even a discussion. The last time we did play them, I think it was pretty well handed to them."