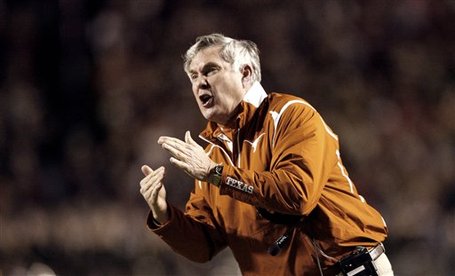 Mack Brown is missing something.

If Texas coach Mack Brown sent his résumé throughout the country, he'd have job offer after job offer.

He's headed up the winningest program in the country with 125 victories since 1998.

He's had nine consecutive 10-win seasons, the second-longest streak of double-digit wins in the history of college football.

He's done it all.

Earl Thomas makes us all happy.

Thomas, a third-year sophomore and therefore eligible for the NFL draft, said he hadn't thought about it because he and his teammates are focused on Saturday's game. He was voted to the All-Big 12 first team by the league coaches on Tuesday.

Asked if he was planning on coming back next year, Thomas said, "Yes, sir."

Asked if he thought another season would help him prepare for the next level, he said, "Yes, sir."

Tre Newton is the the person he is because of his mother.

You see, perhaps most important of all, Tre' Newton is also Dorothy's boy.

"She's my everything," Tre' said as he patiently answered questions, seated in a quiet area of Texas' football facility earlier this season. "There is no question. I am a mama's boy."

Nate credits his ex-wife for his son's development. She was, he says, his insurance policy. Marrying her, he believed, would not guarantee athletic children, but it would assure properly raised children.

"I knew I was shaky," he said in an interview just before going on the air last month at ESPN Radio's Las Colinas studios. "I married a woman who was all about family. I knew if I got sidetracked, she never would.

"It’s right there in front of us," McCoy said. "It’s a goal we’ve worked for all year long and it’s finally here. This is the most important game. We know there are big things after the game if we go out and handle our business. But right now, Nebraska is our focus."

The Heisman may be McCoy's to lose.

Writes Chris Huston of HeismanPundit.com: "Colt McCoy has finally done what voters have been expecting of him all season and, as a result, this Heisman race is now his to lose. If he can lead Texas to a win over Nebraska on Saturday, he'll become the third Longhorn Heisman winner and just the fifth player to win after coming in second the year before."

Will Muschamp and Bo Pelini like and respect each other.

"The bottom line is I just respect what he does,'' Bo Pelini said. "I think he's a hell of a coach.''

"I think as much as anything the players like him,'' Muschamp said. "They play for him. That's what jumps out at you. The guys believe in what he's doing and they're going to play hard for him.''

Pelini said he and Muschamp "touch base every now and then during the season'' or at least exchange text messages. Their wives also have gotten to be friends, partly through mutual acquaintances at LSU.

F.Y.I. The Horns defense will go staggering into the Big 12 title game.

The Texas swagger has been staggered — at least on defense.

For 11 games, the Texas defense played like a dominant unit, and ranked among the best in the country. Opponents couldn't run, few could pass.

Then Texas A&M pushed them all over the field on Thanksgiving night, right up until the Longhorns pulled out a 49-39 victory to keep their unbeaten season intact.

Now No. 3 Texas (12-0) has to hope its defense isn't facing a crisis of confidence heading into Saturday's Big 12 championship game against Nebraska (9-3).

What do the Cornhuskers need to do on Saturday?

Nebraska offensive coordinator Shawn Watson says it will be critical for the Cornhuskers to hold an advantage in time of possession in Saturday's Big 12 championship game against third-ranked and unbeaten Texas.

For the Huskers, defeat isn't a given.

Yes, Texas has clearly been the best team in the Big 12 this season. But Nebraska has a long and glorious history. It allowed Pelini to get the Huskers back in the hunt in a hurry.

"All the things were in place to allow you to have success," Pelini said.

Rex Burkhead was a known property. The Metroplex version of a made man.

Wherever Nebraska running backs coach Tim Beck traveled in the Dallas-Fort Worth metro area, the high school football coaches – many of them Beck's former peers - loved this kid they used to call Superman on the field, in part for his Clark Kent persona he possessed off of it.

"It was unique," Beck says now. "Anywhere you went, people would talk about him and what a great football player he was...when he played, he played hard. And people saw it." 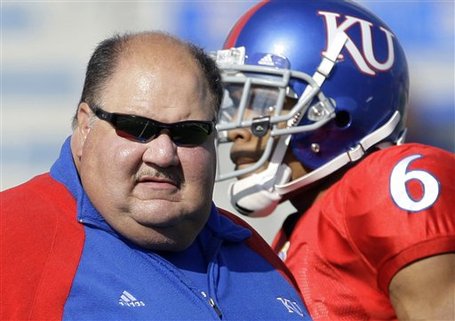 Cory Kipp, a defensive lineman under Mangino in 2002 and ’03, told the Journal-World this week that he endured significant injuries to his hand as a result of a punishment carried out by the coach — a claim backed up by multiple former players, as well as photos taken shortly after the incident.

"It must have been the worst pain I’ve ever felt," Kipp said.

Believe it or not, Bob Stoops is telling the truth.

So why should you believe Bob Stoops when he insists he isn't leaving Oklahoma to take the Notre Dame job? In a profession fraught with coaches saying one thing and doing another, what reason is there to take Stoops at his word?

Here's the only reason you need: Stoops doesn't lie.

The Bears are really, really close to being popular.

How close are the Bears to being with the Big 12 South’s Fab Five?

"I think we’re close, without a doubt," Briles said. "It’s a tough league, a tough schedule."

The Ft. Worth Star-Telegram thinks Gary Patterson is the Second Coming.

The Irish continue to search for the next name.

Gary Patterson, meanwhile, is already on the golden list of TCU football coaches.