In the Trenches - Defensive Dominoes

Share All sharing options for: In the Trenches - Defensive Dominoes

Five days post aTm and I finally have a chance to review game tapes of the worst, by a factor of 2, defensive performance of the season by the Longhorns. PB's in-depth defensive analysis of the first half suggests that the injury to Aaron Williams was a major factor, and that Muschamp's decision to use a lot of new zone coverages with two slow safeties (Brewster and Gideon) was instrumental in giving up the second two touchdown drives in the first half. However, as when someone (Horns) gets a diagnosis of cancer (Nebraska thinking they have a chance against Texas' defense), a second opinion can be valuable.

The theme for today focuses on the often ignored domino effect in football: when a problem arises in a hidden or misunderstood area of play, like the offensive or defensive line, the problem is often manifested in a much more visible area, such as poor cornerback coverage, an ineffective running back, or (lack of) interceptions. There are two areas for considering the domino effect for the Horns: understanding the abysmal defense last Thursday night and anticipating potential trouble with the offense against Nebraska in the upcoming Big 12 championship game. Today I deal with the post-game analysis of the Aggie game, and later this week, I will visit the critical issues in the trenches for the Nebraska game. 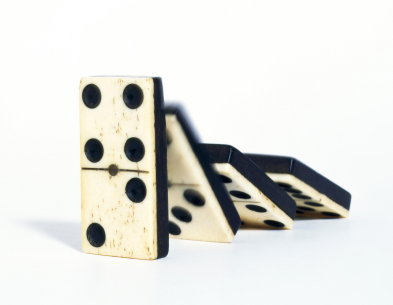 For the first time this year, I felt that the lack of depth among Texas defensive tackles and safeties reared its ugly head in the A&M game, and with dire consequences. It was a short week, made shorter by the post senior day celebrations following the late Kansas game. The defense was on the field a long time in the second half of the Kansas game due to a few stumbles by the offense. So I believe the Horns came into the Aggie game tired and this created a domino effect that was manifested in a number of ways, including the overall lack of intensity, weak-sister tackling, and lack of mental sharpness across all positions.

After the jump, I discuss in more detail the series of dominoes that led to the collapse of the Texas defense by the end of the A&M game.

Many have blamed the poor performance on a passive scheme by Will Muschamp that led to poor pressure on Jerrod Johnson, and it is clear that the Texas coverage in the secondary seemed confused and late most of the game. Some of the passiveness did arise from Muschamp's decision to avoid blitzing and use a lot of soft zone coverages. But I think these decisions were dictated by the performance (or lack thereof) by Texas' defensive tackles and the inability to put 5 competent defensive backs on the field to combat A&M's 3 wide receivers plus TE Jamie McCoy and RB Cyrus Gray. Consider that, excepting the blown coverage that led to the 70 yard touchdown pass to Jeff Fuller, the defense limited the Aggies' offense fairly well for the first two-thirds of the game. They gave up only one long drive early in the second quarter, and the touchdown following the A&M punt that bounced off the leg of a Texas defender at the Texas 36. On the other five drives prior to midway through the third quarter, Texas gave up 41 yards in 15 plays, an average of 2.73 per play. However, after 8:30 of the third quarter, following a second consecutive three-and-out by the Horns offense, Texas gave up 267 yards on 40 plays, an average of 6.6, two touchdowns, one field goal, and one field goal attempt. It seems pretty clear that Texas' defensive fatigue played a role in A&M's offensive outburst.

So, let's explore the dominoes. 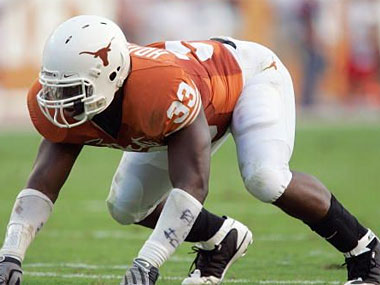 After more than 120 plays in 4 days, Lamarr got tired.

2. Consequences of the blocking scheme? Sergio Kindle was single-blocked by a TE on almost every play, and Sam Acho was single-teamed by an OT with occasional chips from the TE on running plays or by the RB on passing plays. Virtually every Aggie run went away from Sergio or used Jerrod Johnson as a running threat on the zone read to keep Sergio from crashing down the line. Thus, the Aggies placed their chips on neutralizing Texas' DT's and took their chances with single-blocking or optioning the DE's.

3. The lack of pressure in the middle allowed Johnson to step up in the pocket and keep his footwork, and more importantly, escape upfield repeatedly. When Muschamp went to a few twists and stunts to create pressure, this made the problem of Johnson running even worse.

4. The threat of Johnson's running forced Muschamp to play more zone coverage, which played away from the strengths of Curtis Brown and, in the absence of Aaron Williams and his gimpy knee, created a seam up the weak side of the formation of coverage by Keenan Robinson or Dustin Earnest, Nolan Brewster, and Blake Gideon. When Earnest was on the field, this was a considerable weakness, and the Aggies exploited it all night. When they weren't testing that seam, they were testing Curtis Brown's zone coverage on Jeff Fuller on the opposite side.

5. As the defensive "conductor," Blake Gideon and Nolan Brewster got slower and slower to the ball as the game progressed and the number of Jerrod Johnson escapes increased. Without Aaron Williams on the field, there was no enforcer on the weak side of the Texas defense. With a slow deep safety, in the form of Brewster or Gideon, any defense will appear "frozen" and ineffective in zone coverage.

The major questions going forward are:

When rested, will Texas' defensive tackles return to their dominant play? I think there is abundant evidence that they will.

Where is Sergio - how can Muschamp utilize his potential terror more effectively? Sergio is not beating the offensive lineman he is attacking in pass rushing very often, which allows offenses to devote extra blockers to stuffing blitzes or doubling Lamarr Houston.

When will Aaron Williams return to full strength? After Earl Thomas, he may be Texas' most important defensive player against spread offenses because of the different roles he can play. His importance was keenly illustrated by the vast improvement of the Aggie offense when he took his first rest in the second quarter.

How does Muschamp keep Dustin Earnest and Nolan Brewster from being on the field at the same time? If they are both in, their seam becomes the first read for any quarterback - the answer may lie in Aaron Williams' return to health obviating the need for Brewster, but also a re-structuring of substitution patterns by Muschamp.

Is Nebraska likely to exploit any of these weaknesses in the Big 12 championship game? If the tackles return to dominance, then Nebraska will be forced, like almost every other team Texas has played, to attack away from Kindle and toward Sam Acho (as the lesser of two evils) and the Texas corners in their playcalling. Nebraska does not have the diversity of offensive skill players to really exploit these weak points, but Texas needs to re-discover its ability to pressure the quarterback from the edge rather than just relying on pressure up the middle.