It's been difficult to find time to watch film on Nebraska, but I've watched a little, particularly the Oklahoma game, to get a better idea of the team we're facing in just two days.  Since nobody is concerned about their offense, it is prudent to start with their defense and see where they can cause us problems.

Here are some of NU's general defensive stats, via cfbstats.com:

Stats like these don't tell everything and can even be deceiving, but a quick look at this list shows at the very least, Nebraska has a competent defense, certainly more so than most of the teams we have faced so far.  I don't think this unit is quite as good as OU's squad overall (nor ours), but they are definitely in the top 3.

Like Oklahoma, this unit is by far the strongest for Nebraska, and they set the tone for the Nebraska defense.  What struck me as I noticed them is that they do not necessarily get penetration and make plays in the backfield on normal downs, but they are very active along the line of scrimmage and do not allow teams to have consistent gains on the ground.  In that regard, they play pretty disciplined and usually don't get caught shooting too far upfield.  On obvious passing downs, they can bring the heat, and because of that Nebraska is content to not send too many blitzes.  Even then, the line is good at playing contain, and they are strong enough to close the pocket quickly with the hapless QB stuck inside.

Ndamukong Suh is the obvious player to watch.  Not only is the guy big and strong, he is very athletic and quick for his size, and he knows how to use his hands and arms to shed blockers and disrupt plays.  He's also a smart player; he's good at recognizing screens, and he's good at getting his hands up to deflect passes.  Against Oklahoma, he read a screen with OU deep in their territory, stopped suddenly and leapt up to deflect the pass, and against Missouri, he read Gabbert's eyes and then reached up to snag an interception.

One of the plays that really stuck out to me was when OU tried to single block Suh with Jarvis Jones in the fourth quarter of their game, and Suh drove Jones back and then nonchalantly tossed him into Landry Jones.  It was striking how easily he did it.  I would imagine we would avoid trying to block him with just one guy most of the day. 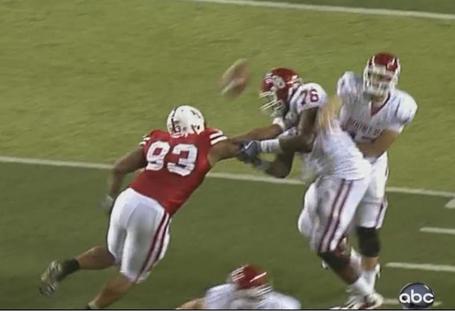 Because of Suh, others on the line can make plays, and they are no slouches.  Crick is having a strong year and had five sacks against Baylor, leading his team with nine total.  Crick is a big guy too but a bit more lanky (at least, as "lanky" as DTs can look), and he has definitely made the most of his the opportunities afforded to him by Suh.  This will be a stiff challenge for our interior O-line.

Their defensive ends are pretty good and strong, but they don't strike me as fast guys like Kindle or Jeremy Beal.  They are good against the run and they can overwhelm offensive linemen with their strength, but I wouldn't expect them to run down plays from behind or run down Colt McCoy if Colt gets loose.  I suspect their job this Saturday will be much the same:  Keep Colt in the pocket and don't allow him to get outside contain.  Whether or not they are successful may be a big indicator of Nebraska's chances.

Our O-line has had some ups and downs this season, and this is going to be a big challenge.  Davis can try to counter the strength of their D-line by moving the pocket around and going no-huddle to try to wear them out, but he can only do so much if our O-line gets whipped out there.

Their linebackers are the least impressive unit.  I don't think they're particularly good at open-field tackling and they are not sharp in coverage, and teams have had moderate success against these guys in the passing game.  They struggled handling Demarco Murray when he came out of the backfield and had some issues against Texas Tech.  Other than Dillard, who is a senior, the rest of this unit is quite young, including their backups.  Nebraska seems to play a lot of nickel to avoid putting too many of these guys on the field at once, and only Dillard is among the leaders in tackles on this team.  They have definitely benefited from the strength of the D-line.

Dillard will clean up after the D-linemen but he's not that impressive athletically, and Sean Fisher's abnormally tall height can be a detriment since he can't shed blocks.  Nebraska will be putting extra defensive backs on the field, not only to defend our passing attack but to keep their linebackers on a short rotation.

To make up for their weaker linebacker unit, Nebraska likes to play extra safeties.  The secondary as a whole is not a lockdown type of unit, but they can tackle and they are disciplined.  Amukamara is a pretty good corner and was leading the team in interceptions until O'hanlon picked off Landry Jones three times.  He is still 6th in tackling on their team and leads the team in PBUs (other than Suh).  He's not a lockdown guy, in my opinion, but he's big and fast and he plays zone well.  The other starting corner, Dennard, has improved throughout the season, but there is a definite gap between Amukamara and him.

The second best player on their secondary is Asante, who can tackle very well and has decent range.  I don't think he's good at one-on-one coverage, but he can come up and make plays in front of him, much like OU's safeties.  After that, O'hanlon is a decent player who plays smart, and Eric Hagg is their primary nickel guy who can come in and tackle and blitz.  Both are white guys that O'hanlon is a white guy who may draw joking comparisons to our own Blake Gideon.  Whether that is a compliment or insult may differ between Longhorn fans.

I think this is a unit that can be stretched vertically and who can have trouble if a strong running attack reaches the second level.  Also, quarterbacks that know how to attack a zone for chunks of yards, such as Todd Reesing and whoever Texas Tech is using, can have some success against them.  I hope GD doesn't resign himself to trying to only dinking and dunking to the endzone, because these guys like to play that way.

It is fair to say that we haven't seen a defense of Nebraska's caliber since the OU game, and our offense did not perform well then.  However, it is also fair to say that Nebraska hasn't faced an offense with as many weapons and balance as we do when we're at our best.  The biggest factor, without a doubt, is how we handle their defensive line, particularly their mean interior.  If we can't get the running game going and Colt's starts feeling heat on passing downs, that may cause Davis to resort to short, quick passes all day, allowing Nebraska's secondary to play aggressive without fear of getting burned.

One great way for us to keep the running game alive and the defensive line guessing is using Colt's legs.  Zone-reads and QB draws can do wonders for our runningbacks and our O-line's ability to handle the pass rush.  I'm not so sure about screens; NU seems to play them well and they don't blitz a lot.  As far as the bubble screen, I think a few of them are justified to see if Nebraska can handle our receivers and to set them up for some big plays.

I don't think we'll tear this defense to shreds, but I'm optimistic for real success.  I think we can definitely double their scoring average on the season.