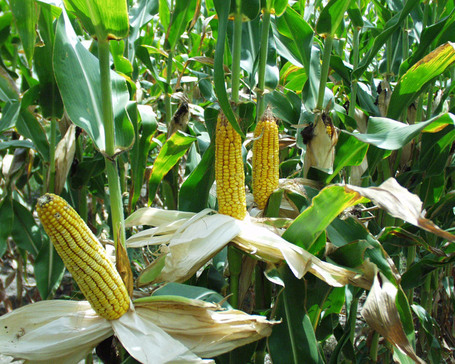 We need to finish this and get on to Pasadena. 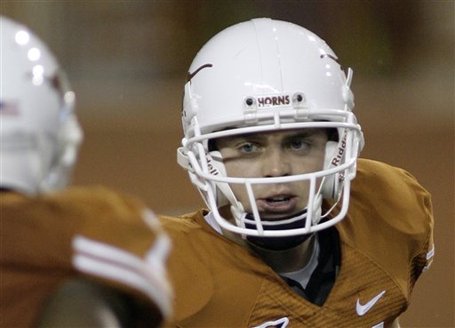 This is Colt McCoy's final run.

Now that he's healthy – besides the respiratory illness, McCoy battled the flu in September – he's back to being a dual threat. His short passes are eerily accurate; McCoy rarely leaves the ball on the wrong side of his receivers. As 175 rushing yards vs. Texas A&M showed, he's still got the jets to run. Brown said UT struggled, too, with its offensive identity earlier this season – it happens to the best of the programs, you know? - but inserted a tight end to help develop the running game.

Malcolm Williams gets a late burst.

At midseason, he qualified as an offensive afterthought, buried on the wide receiver depth chart.

Williams has nearly equaled his numbers from the first 10 games in the Longhorns' last two. In those two games, UT has scored 100 points.

Williams says his faith in himself has surged, because he sees quarterback Colt McCoy looking for him without hesitation.

Kirk Bohls wants to hand out some awards.

The sophomore cornerback for Texas had maybe the two biggest plays of the year, and both came against OU. His tackle of Sam Bradford ended the Heisman Trophy winner's day and college career. He also had a key interception right after Colt McCoy was picked off in the fourth quarter that all but sealed the game. Williams may be the third-best NFL prospect on the team behind Sergio Kindle and Lamarr Houston.

Someone has been working some overtime in the UT SID.

Tebow's third-down prowess in the fourth quarter was what separated Florida from Alabama a year ago in the SEC championship game.

There's no doubt that Tebow is one of the best in the business when it comes to converting in those key situations.

But thanks to some legwork by Texas sports information director John Bianco, Tebow hasn't been THE best this season.

The best meets the best on Saturday.

Texas quarterback Colt McCoy has been selected as The Associated Press Big 12 offensive player of the year for the second year in a row.

Barking Carnival has a Nebraska preview. First up, the defense:

Judging from the Coaches All-Big 12 team, this is the finest collection of defenders the Big 12 has ever seen. Outside of the Big 12 North Galapagos where there are no offensive predators and beyond the Big 12 South Bob Stoops sewing circle, they’re the 2nd or 3rd best defense in the league with all of their impact players loaded on the DL and 1-2 secondary spots. They put a few players on the field that are outright poor, in fact. They have also feasted on a schedule of bad offenses. They’re as vanilla as Omaha foreplay and pretty much run a base 4-3 and dare you to beat them. Obviously, they’ll go base nickel against us but I doubt we see too much exotic unless Pelini pulls out all stops and rolls the dice.

The Cornhusker offense is up next:

Their offense has the complexity and careful nuance of David Hasselhoff’s acting. Nebraska started playing better football when they decided that they were going to run every down and throw the ball to Niles Paul down the field or dump it off to a open TE/RB in the flat about every six rushing attempts. Zac Lee no longer loses games for them and they’re protecting their defense. They average only 346 yards per game and 25 ppg, but those numbers are a tad deceptive in that they’re averaging a nearly-respectable 5.5 yards per play. The reason is pace. The most misunderstood aspect of offense in college football.

Upsets are rare in the Big 12 title game, but they do happen. (Just ask Nebraska.)

The Longhorns have enjoyed the ecstasy and endured the agony of what happens when a giant falls.

"If you're good enough," said Texas coach Mack Brown, "you win this game."

The Huskers want to stay away from those third-and-long situations.

"We can't be put in third-and-10s because obviously they're very good at third downs,'' NU tackle Mike Smith said. "We just need to be able with first and second down to get to manageable third downs — or not even into third down at all.''

Turnovers will be key to this game.

Husker coach Bo Pelini knows full well his team can’t give away any freebies to the Longhorns on Saturday night in the Big 12 title game.

Coach Bo Pelini insists that his team hasn't gone about things differently as it prepares for the season's biggest game.

The Huskers have practiced well this week, Pelini said today, but as usual, they're trying not to get too emotionally involved as the anticipation builds for Saturday's Big 12 championship game against Texas.

Barking Carnival thinks the Horns will skip on to Pasadena.

To me, it’s pretty simple. Nebraska isn’t even in the same class as a program as we are. Frankly, I’m not sure they ever have been.

Tim Tebow did not win the Johnny Unitas Golden Arm Award. This can't be good. 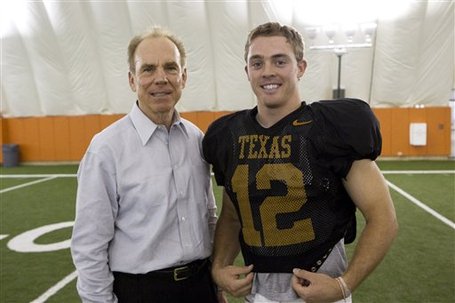 Roger Staubach grabbed a football and handed it to Colt McCoy.

One of the top-rated passers in NFL history wanted to see if the college kid was as good in person as he looked on TV. McCoy rifled the ball back to him, and Staubach was impressed.

"He passed my test,'' Staubach said with a laugh.

And it wasn't just the arm strength. It was release. It was touch.

"He could do it all,'' Staubach told The Associated Press.

A sports writer in Omaha has his Heisman ballot ready to go.

I'm pretty locked in on Suh, for two reasons: I believe that Suh is the best player in the country, and I want to use my vote to make a statement.

Statement? Yes, I said no gimmicks. And my little vote isn't going to change the culture of the Heisman vote, which has become an annual replay of the last scene in "Casablanca.'' But I'm tired of rounding up the usual suspects.

This time the roles are reversed. The Cornhuskers would like some payback.

Nebraska is looking to mess with Texas and get a little payback for its Cornhusker brethren who lost to the Longhorns in the first Big 12 championship game.

If the two-touchdown underdog Huskers happen to win Saturday night, they'll ruin unbeaten and third-ranked Texas' chance to play for the national championship.

Such an upset would be hard-pressed to match the magnitude of the 1996 game in St. Louis, where 20-point-underdog Texas stunned the Huskers 37-27 and ended their hopes of winning a third straight national title.

Head on over to Corn Nation and answer some questions about the Horns. Play nice.