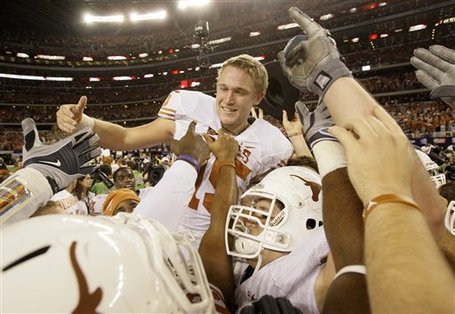 It is official. The Horns are in.

As expected, it will be Texas vs. Alabama playing for the national championship, Jan. 7 at the Rose Bowl in Pasadena.

"We just couldn't handle him," Brown said. "I tried to find him to wish him good luck in the NFL, because I don't want to see him again."

Barking Carnival has the good, the bad and the ugly- Texas & Nebraska.

All is said and done now, and an often-exasperating season gave us one last exhilarating Saturday to remember. But with Texas' win, what seemed like the best ever hope for an outcome that forced substantive changes was lost. And it would be hard to not take that as a loss tonight, unless you're wearing burnt orange.

SB Nation's Team Speed Kills wants TCU and Alabama in the title game. It seems Texas is not a talented enough opponent.

If I were to right this post from an SEC fan's perspective alone, it would be a full-fledged campaign pitch for Texas to play in Pasadena next month. I said it to someone and so I'll make it public: If that Texas team defeats Alabama, I will sing "Texas Fight" on the season-ending edition of Team Speed Kills Now. The easiest way to bring another crystal football to the SEC is to allow Texas into the national championship game. They haven't played the second-best football in the country and don't deserve to play in Pasadena. TCU does.

I am writing this under no delusions. I know that it's unlikely that anyone with any power will read this or change their vote because of it. But I have to do it anyway in the hopes that maybe, somehow it will reach the ears of someone in power. Because to be an intellectually honest opponent of a playoff, I have to push for as fair a settlement of the season as I can. And it will be a travesty if Texas plays ahead of TCU because they've been ranked higher than TCU.

Anger management issues must be in the Pelini DNA. One more Pelini brother was upset Saturday night.

Another Pelini brother, Vince, got in on the act — "They're sick," he said, shaking his head and adding, "Zero-zero on the clock" — before the Cornhuskers coach resurfaced.

"Get Dan Beebe!" he shrieked, asking for the Big 12 commissioner.

Nothing seems right to Dennis Dodd.

It just doesn't feel right, not when the two happiest men in college football Sunday were Dan Beebe and Walt Anderson.

It doesn't feel right because the Big 12 commissioner (Beebe) and his supervisor of officials (Anderson) were just as much a part of Saturday's furious finish to the season as was the football.

It doesn't feel right because half of the BCS title-game matchup was decided from the video replay booth. The commish and his supervisor had to put the final stamp of approval on Texas' 13-12 non-loss over Nebraska. Yeah, they got it right even after Texas almost got it unforgivably wrong.

Many of you saw it and you still can't believe it.

People in Baton Rouge are still a little bitter about the loss of Nick Saban.

Need a midseason promise? McElroy delivered on his. Need a re­markably efficient passing game? McElroy did it. Need some nifty runs? McElroy produced them. Need some emotion? McElroy posed like a pro wrestler.

Alabama was just too much for Florida.

Nick Saban kept saying Alabama’s best game was still out there. He said it over and over as the season progressed.

The Sooners will play Stanford in the Sun Bowl.

The Stanford football team will face Oklahoma in the Sun Bowl in El Paso, Texas, on Dec. 31, the school announced Sunday.

Kickoff is set for 11 a.m. and the game will be televised on CBS.

The Aggies will play Georgia in the Independence Bowl.

Texas A&M University has accepted an invitation from the AdvoCare V100 Independence Bowl to play the University of Georgia in the 2009 bowl matchup to be played Monday, Dec. 28 with kick scheduled for 4 p.m. (central) in Independence Stadium in Shreveport, Louisiana. The game will be televised by ESPN2.

Oklahoma State will play Ole Miss in the Cotton Bowl.

Both Ole Miss coach Houston Nutt and Oklahoma State's Mike Gundy were quarterbacks for the Cowboys and Nutt was wide receivers coach during Gundy's playing days. They're familiar with each other and ready to get reacquainted in the new year.

"My first memory of Mike Gundy was right in the very first two-a-days we noticed a guy who was pretty confident stepping into that huddle," Nutt said. "Once he got a chance as a true freshman – he took over about midway through – we knew we wanted one person in that huddle and it was Mike Gundy."

Texas Tech will play Michigan State in the Alamo Bowl.

Missouri will play Navy in the Texas Bowl.

Sporting News has Turner Gill as the leading candidate to replace Mark Mangino at Kansas.

Just one second ruined the hopes of the Bearcats and the Horned Frogs.

It's amazing how so many feelings for so many fans in Texas can change with one second.

When Colt McCoy's pass crossed the Nebraska sidelines, landing on the railing by one of the ground-level suites, it appeared Texas' dreams of a national title were over. At the same time, it looked like TCU's Horned Frogs had turned into championship princes, complete with a purple tint.

Bill Hancock loves his job as the BCS director.