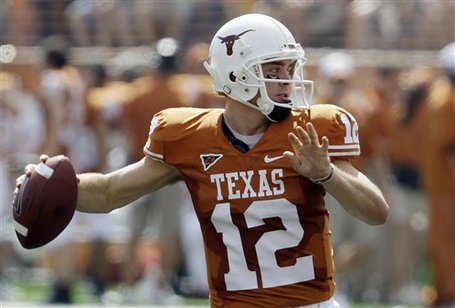 Colt McCoy is in.

The Heisman Pundit thinks McCoy is the one.

McCoy seemed like such a baby compared to Young, so much so that his coaches worried he'd get intimidated by the seniors in his own huddle.

But McCoy's fierce determination to beat back other contenders for the job - Jevan Snead transferred to Mississippi - made him the Longhorns' starter as a redshirt freshman and Texas kept winning.

Coach Mack Brown had figured he might be latching on to something special when he recruited McCoy out of the tiny town of Tuscola.

"He's a guy who was a winner in high school in basketball and golf and football and everything he ever touches,'' Brown said.

The Horns get their shot.

Jordan Shipley, Texas' star receiver, woke up earlier than normal Sunday morning, despite the fact his team had played a very late, very important game the night before.

He was too excited to linger in bed for this reason:

Kirk Bohls has a message for Nebraska.

This just in: Texas isn't ashamed. Texas isn't going to give back the Big 12 trophy. Texas is still better than Nebraska. By one very skinny point.

And as Texas quarterback Colt McCoy said, "We accepted it."

As well the Longhorns should.

Mack Brown sticks up for the Big 12.

The perception by some that the Big 12 is inferior to the Southeastern Conference has always been a sore spot for Texas Coach Mack Brown.

So just about any time that his team plays a low-scoring game, he usually takes a subtle swipe at the pro-SEC crowd. He did that after his Longhorns beat Oklahoma, 16-13, earlier this season and again Saturday night after they beat Nebraska, 13-12, in the Big 12 championship game.

“It was a night about defense, and once again, if this had been the SEC, we would have called it a beautiful game,” Brown said. “That’s what happens. You get in the Big 12, and we expect offense to run down the field, and those two defenses played great.”

Planning a trip to the game? Save up. At least there are more flights to Pasadena.

On Sunday, even before the official matchups were announced, BCS championship game tickets were going for $925 and up on various ticket Web sites, with some sellers on StubHub.com asking $5,000 for prime end-zone seats.

Spokesperson Joellen Ferrer said 45 percent of the buyers on the ticket resale Web site were from Texas.

At TicketCity.com, an Austin-based ticket brokerage, tickets were going for $950 to $2,500 on Sunday, and Scott Nugent, who works in sales, said the inventory was quickly dwindling.

Bo Pelini has moved on.

Pelini, taking part in a Holiday Bowl teleconference, declined to discuss his postgame conversation with Big 12 Commissioner Dan Beebe or to comment on the explanation given by Big 12 coordinator of officials Walt Anderson for how the final seconds were handled.

“What happened happened,'' Pelini said. “We lost the football game, and I wish Texas luck. I'm not getting into that.''

Alabama and Texas have played each other eight times. So far, so good.

This will be the fifth time in 50 seasons that Alabama and Texas have played in a bowl game. In the previous four, the Longhorns came in as the lower-ranked team. Texas earned three victories and a tie. In fact, since the teams first met in 1902 -- around the time that Alabama became associated with crimson and one year before a sportswriter referred to Texas as the Longhorns -- Alabama is 0-7-1 against Texas.

The biggest anarchist on the coaches' poll panel appears to be recently fired Louisiana-Monroe coach Charlie Weatherbie, who seems like a stand-up guy judging by his players' response to his ouster. Weatherbie voted Texas fourth, behind No. 2 TCU and No. 3 Cincinnati. 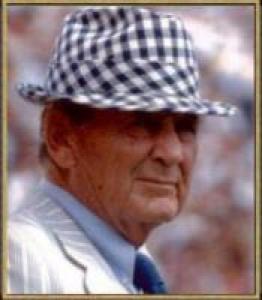 You can't mention Alabama without thinking of Bear Bryant.

We have been welcomed over at Roll Bama Roll, the great SBNation site for Alabama. If you haven't stopped by, please do and say hello.

Mark Ingram gets a trip to New York.

"I'd feel real good just to go represent our school, this rich tradition that we have and all the Alabama family, my teammates, my coaches, alumni and fans," Ingram said Saturday night. "It would be great just to represent them and maybe bring back a trophy for them."

Alabama cleaned up. The All-SEC team has a crimson hue.

Nick Saban doesn't want his players to drink the Kool-Aid.

"You've got to stay fo­cused on what you need to do to prepare to play your best football, and you're just being set up when you listen to some of these talking heads out there that make these predictions about what's going to happen and why they're going to pick who's going to win based on probably a lot of misinfor­mation."

Nick Saban is worth every penny. Alabama fans do not have buyer's remorse.

Mal Moore handed Nick Saban $32 million over eight years to come save 'Bama football. If we didn't all cluck our tongues and think bad thoughts about the purity of college sports, we knew someone who did. The school didn't blink when Saban, despite a flat-out lie to the contrary, came to Tuscaloosa. It was ruinous and foolish. Moore, Alabama's AD, knew better.

Look what $32 million gets you today. Is a berth in the national championship game good enough?

"I felt the hire was so crucial," Moore said outside a crazy Alabama locker room Saturday night. "I felt like we had to hire someone who was accomplished and had won a national championship to give us that opportunity to get back." 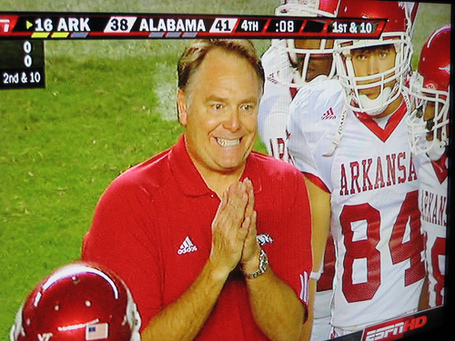 The Okies are making the best of what is left of their seasons.

Or you could bill these postseason games involving the Cowboys and Sooners this way: Mike Gundy vs. Houston Nutt; and Bob Stoops vs. Jim Harbaugh.

In an era where coaches often are bigger rock stars in college athletics than the players, Gundy, Nutt, Stoops and Harbaugh all fall into that category where they are definitely the charismatic faces of their respective teams.

The subplots involving these coaching duels abound. But the most important, attractive and exciting one for fans and television viewers is that all four men will bring teams that are focused on winning as much as enjoying themselves.

Stop emailing Dan Hawkins. He has a new address.