The War of 13-12. Dave Parry, the national coordinator for college football officiating, comments on the Texas-Nebraska game.

Parry said the game officials were correct in reviewing the play and restoring the time. He also said he did not think the officials timed the game differently at different points. (Big 12 football officials coordinator Walt Anderson said Saturday night that a few clock corrections were made in the game, which "is exactly what we want the officials to do.")

"I would think they were pretty much on the mark every time," said Parry, who added that Saturday's game, like all championship and bowl games, is reviewed for plays that are included on a training video. "If here and there they were off by a second, throughout the game that balances. ... When the game is on the line, at that moment of truth, it's critical to get it exactly right."

McCoy says he thought the clocked stop on a pass out of bounds as soon as it crossed the first down marker. Had he known the rule, he says, he wouldn't have floated a long and high pass over the bench area that didn't touch down until it appeared to hit a railing near the stands.

The BCS title game is no David vs. Goliath.

My take: Someone flunked Sun­day school.

It’s a nice visual, Terrence Cody as the allegedly unbeatable giant and Colt McCoy as the plucky little guy with a stone.

Too bad it’s wrong. It’s so wrong, when ESPN made that laughable suggestion Sunday evening, it al­most made a serious mistake.

It would’ve been ugly to see Nick Saban’s head explode on national TV.

"There is no David and Goliath in this game," Saban said. "That’s not the way it is, guys, and our players need to understand that."

At LSU, Saban and Muschamp masterminded the defense that delivered a 2003 national title.

Texas offensive coordinator Greg Davis plans to utilize Muschamp's knowledge as much as possible in preparation for the Citi BCS National Championship Game.

"One of the good things is being able to work against Will," Davis said. "During this time, he'll have a great idea of the way they'll prepare for certain formations, certain blitzes and things like that. Will is a great resource for us."

Are thanks in order? Hunter Lawrence saved the BCS.

The last-second field goal that propelled Texas into the national championship game might have been the most important kick in Bowl Championship Series history.

It made the oft-criticized system appear fair and open by sending, for the first time, two teams from non-automatic qualifier conferences into the BCS.

Of the four slots reserved for at-large entries, one's going to TCU and the other to Boise State, which are ranked Nos. 4 and 6, respectively, in the final BCS standings.

But a missed kick might have started a chain reaction eventually resulting in the destruction of the system.

As of today Alabama is a five point favorite over the Horns.

Roll Bama Roll explores the history between the Texas and Alabama programs. The first time the two teams met was in 1915.

Racking up accolades. Alabama's Rolando McClain won the Dick Butkus Award as the nation's top linebacker. Defensive coordinator Kirby Smart has been named the winner of the Broyles Award as the top top assistant coach in college football.

This is a good reason to have your school go to the BCS title game. 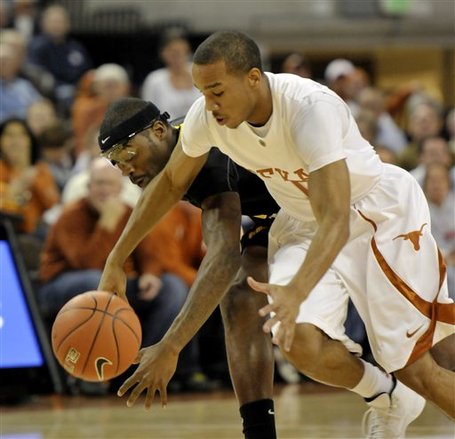 Junior Dogus Balbay set a career mark with 11 assists Monday, but the biggest development for the Longhorns might have been the proficiency of two freshmen.

Rick Barnes' radio show is back. Be sure to tune in.

The Missouri Tigers are not happy.

Missouri Coach Gary Pinkel called the conference selection process "frustrating" but chose to focus on the positive after learning of the Texas Bowl bid.

Besides playing a Navy team that beat Notre Dame and narrowly lost to Rose Bowl-bound Ohio State, the Tigers will return to a state that is fertile recruiting territory. The Dec. 31 game will be broadcast on ESPN rather than the less readily available NFL Network, which has rights to the Insight Bowl.

Some Missouri players acknowledged their confusion about bowl bid distributions. "I don’t know how it works," said nose tackle Jaron Baston. "All I know is, I get a phone call and they tell me where I’m going."

If you think Mark Mangino resigned willingly as Kansas University’s football coach, I have some oceanfront property near Oskaloosa I’ll sell you, and I’ll throw the Tonganoxie Split in free.

But you have to go back 35 years to find the last KU football coach who was forced to resign. Who was it? Don Fambrough. And, interestingly, Fambrough and Mangino "quit" because of similar occurrences.

The Pelinis should act like they have been there before.

Coaches tell players when they score a touchdown to "act like you’ve been there before" instead of celebrating like it is New Years Day. Some coaches need to listen to their own advice after a game win or lose. Your character is on display during wins and losses. Wins will continue to be the norm for Nebraska because Bo Pelini is a good coach. The character that Mack displays after a game helps the team for its next challenge. Let’s hope that Bo learns a little from him so his teams will continue to be successful at every challenge.

This is news? According to Barry Tramel, the BCS blew it.

What were you guys thinking, pairing TCU and Boise State in the Fiesta Bowl? That's great for the coffers of the Mountain West and Western Athletic conferences. But it doesn't do squat for the reputations of those leagues looking to make a name for themselves.

TCU and Boise State playing in the Fiesta Bowl is like inviting them to Thanksgiving dinner but making them sit at the kids' table.

The Austin American-Statesman's Cedric Golden thinks a playoff would work.

Rep. Joe Baron writes for the Ft. Worth Star-Telegram.

No good deed goes unpunished! I was minding my own congressional business when a Star-Telegram reporter called and asked about a bill I introduced back in January concerning the college football Bowl Championship Series. I was pleasantly surprised with the reporter's interest and answered her questions. So imagine my disappointment when an editorial in the very same newspaper referred to me as one of the showboats in Congress.