Share All sharing options for: PSA: Buy A Football, Help A Kid

The Neighborhood Longhorns Program, which BON likes to support, has asked us to help them on a fundraising campaign, to which we happily agreed. Below you'll find details on how you can order some pretty cool commemorative footballs, proceeds of which benefit the NLP, a terrific organization.The limited edition footballs come with an acrylic display case.

Click through the jump for the ordering details provided to us. 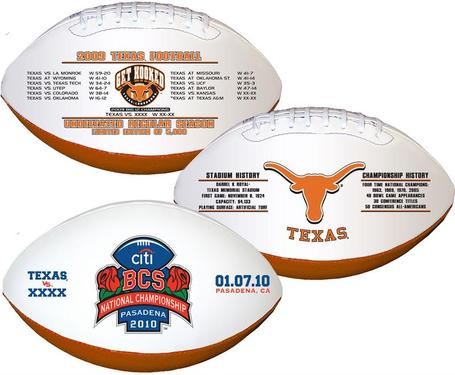 The Texas Longhorns BCS title game footballs will have the official BCS Championship logo on it, along with all sorts of historic information about the rich tradition and history of Texas football printed on 3 of the white panels of the full-sized football. Each football come with a handsome acrylic display case and is priced at $99 each. In recent years, Nikco Sports has raised close to $1.7 million for children's charities and other special endeavors.

Fans can order the footballs while the supply lasts by calling 1-800-345-2868 or visiting www.nikcosports.com. Each football comes with a numbered certificate of authenticity. The football will feature three distinct and attractive white panels, each one full of historic and important information. These will not be sold elsewhere, making it a "must-have" for any diehard Longhorns fan, something that can be displayed proudly at home, in an office or used as a fundraising gift at golf events or silent auctions. A special gift flyer that includes a photo of the football can also be downloaded off the Nikco Sports website so fans can use as a holiday gift idea immediately.

Panel One of the football will contain information about the school’s stadium history, including the date of the first game played there on Nov. 8, 1924.  In the center of this panel is the traditional Longhorns logo and to the right side of that is a listing of school championship history, including a listing of all four previous national titles, and recognition of the Longhorns 49 bowl appearances, 30 conference championships and 50 consensus All-Americans.

Panel Two will recap the 2009 regular season, game-by-game, with opponents and final scores of each contest, and also will be framed by the Big 12 Championship logo, along with the final 13-12 score against Nebraska in Dallas on Dec. 5.  It also has a printed inscription that reads "Undefeated Regular Season."

Panel Three is reserved for the official BCS championship game logo, and includes the venue of the January 7, 2010 game (Pasadena) along with the two opponents (Texas vs. Alabama).  If the Longhorns go on to win the national title, the final score of the game and the words "National Champions" will be added to this section of the football.