Motor. It's something of a cliche when applied to athletes, but there's a reason the expression finds so much use. To peacefully exist in marriage with my sports-obsessed grandfather, my grandmother took an interest in sports, always preferring the players who worked hard and played the game with intensely, but with an understanding of the fundamentals -- she was not one to be swayed by false hustle, with guys like Omar Vizquel and Anderson Varejao among her favorites. Honest effort endears athletes to their fans and so I think it's safe to say that my grandmother would like Calvin Howell

Howell's motor is always running ($), manifesting itself in his physical play. He can bull rush to collapse the pocket, but understands how to fill his gap in the running game and uses his explosiveness off the ball and inconsistent pad level (better when going against one defender) to force running backs outside. Just as offensive lineman must punch violently with their hands to create separation, so too must defensive lineman. In this area, Howell is significantly advanced, punching violently and consistently to shed blockers and put himself in a position to make plays. 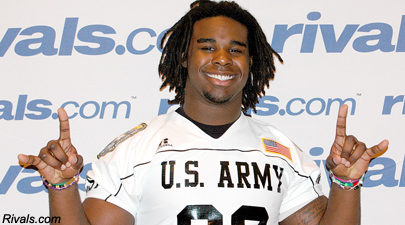 That motor wouldn't mean much on the football field if he wasn't physically gifted as well. To earn the reputation as giving consistent effort, a player has to show up around the football. For a defensive lineman, that means an ability to not only change direction quickly, evidenced by his 4.4 shuttle, but also demonstrate solid burst when doing so, which is exactly what Howell shows, leading Rivas to rank him as the fifth-quickest defensive tackle ($) in the country.

With the focus of Longhorn fans resting squarely upon Jamarkus McFarland throughout much of the recruiting process, Calvin Howell's skills came to be taken for granted. It made sense, in a lot of ways, as McFarland was rated one of the best defensive tackles in the country and Howell hadn't yet cracked the Rivals Top 100. During the week of the US Army All-American game, Howell forcefully put his name on the national map and shot into the Top 100, while McFarland slipped in the rankings and lost his fifth star, with Howell moving into the LSR's Top 10 ($), only one spot behind former top prospect McFarland. In fact, Howell was so impressive that Rivals gave him  honorable mention as the biggest surprise ($) from the week.

Known for his ability to draw double and triple teams, McFarland earned a reputation as one of the strongest defensive tackles in the country. There isn't any reason to doubt the veracity of that claim, but Howell's strength should not be overlooked. He bench presses 410 pounds (a school record) and squats 485, compared to a bench press of 365 pounds by McFarland and an identical squat.

As is obvious from his picture, Howell is a gregarious, outgoing kid known for his personality, earning the unofficial distinction as the "most charismatic and vocal member of the West squad ($)." Howell was consistently among the first to practice, directing a comment at the coaches one day McFarland showed up late that the Texas players were ready to go, while the OU player wasn't. The rivalry builds already.

The area in which Howell lags significantly behind McFarland is in his ability to take on double teams. At about two inches shorter and much more stout in frame, McFarland has a lower center of gravity, making it easier for him to create leverage against multiple players. While Howell often plays with good level coming off the ball, he tends to lose his leverage when facing more than one blocker, leading him to get pushed off the ball when doubled. The more consistent pad level from McFarland is the main difference between the two, though Howell did an excellent job holding double teams on the third day of practice for the Army game ($) using proper pad level.

Howell also had a scare on the first day of practice leading up to the Army game, when DJ Fluker drove him ($) nearly 10 yards backwards on one play, knocking him into a water cooler and injuring his knee. It was reported as a scary play and certainly sounded like it, with Howell suffering a deep knee bruise contusion. To his credit, Howell returned to practice the next day after x-rays turned up negative.

As the star of Howell rises and the corresponding star of McFarland falls, Longhorn fans no doubt feel a sort of karmic victory. That certainly should be the case -- high school all-star games showcase the talents of players in the trenches well, particularly in the week of practice leading up to the game. In that context, Howell's excellent performances in San Antonio should boost expectations for Howell, while minimizing the loss of McFarland.

However, it's hard not to consider the mental strain placed upon McFarland and his resulting reticence to spent time around the rest of his West teammates when evaluating his overall performance. I don't want to get into this any more than I already have, but it's probably fair to say that McFarland is probably closer to the player everyone thought he was based on the body of his film evidence in high school than the probably slightly depressed kid who showed up in San Antionio. Conversely, Howell is probably much closer to the player whose stock rose in San Antonio against top competition, though he has work to do over the summer.

Howell's superior strength is certainly an asset, but mass plays an important role in the middle of the line. His weight dropped down into the 265 range after the Army game, leaving him 15 pounds short of his playing weight from his senior season. In terms of build and quickness, that makes Howell sound a lot like Lamarr Houston, meaning that both can play inside, but should probably be paired with a heavier player to anchor the middle, as Houston paired with Roy Miller. With that being said, Howell will probably also play the three technique Houston played last season inside.

Basically, the idea is that if Howell cracks the rotation as a freshman, it would be as a backup to Houston rather than playing alongside Houston in Miller's vacated role. The comparison to Houston runs even more deeply, as Howell played some defensive end ($) his senior year of high school to provide him with one-on-one match ups, similar to Derek Johnson, while still moving inside when needed and playing defensive tackle and nose tackle. It's not clear who will anchor the middle of the defense last season, but Howell could well step into the role Aaron Lewis occupied backing up Houston, with Jarvis Humphrey, Kheeston Randall, and Ben Alexander battling for the other defensive tackle position that will likely end up being a one technique if those players can hack it there.

Oftentimes intangibles are just that -- intangible and difficult to quantify, but Howell has the perfect personality to eventually become a leader of the defense. Even people who might disregard a statement like that couldn't argue with the very real lift that Vince Young provided during his time and that defensive leaders like Roy Miller and Brian Orakpo gave to the team in 2008. A natural leader similar to VY, Howell will be ready to step into a role as a leader of the defense when he gets to be an upper classman and has the natural talent and work ethic to back up any talk on the field.