With Signing Day on Wednesday and the Longhorns' 2009 class essentially complete, it's time to look at the second-to-last commitment to analyze.

Rating (Rivals): Five out of five

Speed. There aren't many defensive ends who can run a 4.6 40. Hell, Scott Derry probably still has wet dreams about being that fast. Fast enough, that is, to earn the  best defensive lineman award ($) at the NIKE Combine last spring. Along with his explosiveness off the ball ($), Okafor's speed allows him to turn the corner on opposing offensive tackles, as well as run down plays from the backside, which is perhaps his trademark maneuver. If his teammates can slow down or re-direct the running back in the backfield, there's a good chance that Okafor will crash down on the play from the weakside and make a stop at or near the line of scrimmage.

Another reason Okafor makes so many plays in the backfield is his ability to knife through gaps, almost like an elite linebacker. Of course, as Rashad Bobino proved throughout his career, getting into the backfield is only the first step. The next step is to break down, keep square, and then allow pure athleticism and change of direction to take over before finishing the play by wrapping up the ball carrier and driving with the legs. Capable of fulfilling each of those steps, the result was 59 tackles, 17 tackles for loss, and 12 sacks as a senior for Okafor, despite teams generally avoiding his side of the field. 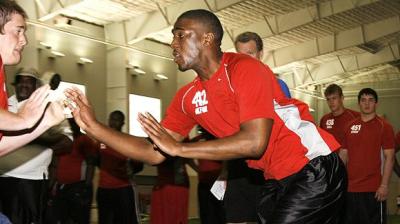 Okafor working out at the NIKE Camp last spring.

Okafor isn't a physically imposing player at this point in terms of raw strength, but he does use his hands violently to create separation from offensive lineman trying to block him. With his lack of pure strength (he bench presses 245 pounds), keeping opposing lineman from getting into his body becomes extremely important and is a skill that will help Okafor develop quickly at the college level.

Maintaining separation from offensive lineman also helps Okafor use his 35-inch vertical leap to knock down passes when unable to get to the quarterback. Just see Todd Reesing against Texas last fall to understand how much disrupting passing lanes can throw off a quarterback's rhythm.

Though not as thick as Devon Kennard, Okafor uses his lower body well to generate power and mount an effective bull rush, his strongest pass-rush move after taking the edge or jab-stepping and showing an underdeveloped rip move. 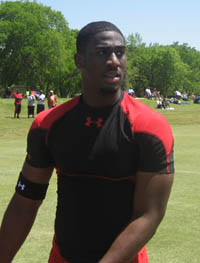 While still on the lanky side, Okafor is hardly physically underdeveloped.

Like Calvin Howell, Alex Okafor's performance during the week of the Army All-American game drew rave reviews and helped him rise in the recruiting rankings. Along with USC recruit Vontaze Burfict, Okafor was the most dominating defensive player for the West ($), repeatedly abusing the highly-rated DJ Fluker. Just as impressive as his explosion off the ball was the sure motor with which Okafor played. Criticized at times as a junior for taking plays off, Okafor truly began to understand as a senior his ability to effect almost every play with sheer effort. That combination of athleticism and understanding helped take Okafor to the proverbial next level.

At around 240 pounds, Okafor could stand to add some muscle to his relatively lanky frame, which shouldn't be a problem considering his long wingspan. Since he is already enrolled in school and participating in the strength training program at Texas, he should be able to add around 10 pounds of muscle before fall practice, which would greatly increase his chances of playing early and often.

Like nearly every high school defensive end, Okafor doesn't have a polished array of moves rushing the passer, but then Will Muschamp doesn't ask his defensive ends to develop a large number of moves, rather asking his players to quickly get to a designated spot on the field, then transfer their speed into power. While Okafor may struggle initially with the power aspect, there is no doubt that he has the speed to become an elite pass rusher for Texas.

In the running game, Okafor sometimes struggles to maintain good pad level ($) and to disengage with blockers. Some of his problem disengaging from blockers might be the result of few teams running directly at him during his last two years in high school, reducing the number of game reps to develop those skills.

A dominant performance in the playoffs during his senior season vaulted the stock of Tevin Mims and drew an offer from the Longhorns. During his junior season, Okafor put in similarly dominant performances during Pflugerville's deep playoff run and drew the attention of major programs like LSU, Stanford (considered mostly for academics), and Oklahoma, in addition to the interest from Texas. From that point, Okafor's stock has only continued to rise, particularly after a strong performance at the US Army All-American game earned him a fifth star.

Despite his growing accolades, Okafor only showed in the game the skills he demonstrated throughout his high school career:

The West team spent a lot of time twisting and stunting with their defensive line, which didn't allow for a great analysis of Okafor's rushing ability from the edge, but he does show the ability to chase plays down from the backside. Showed a nice ability to use his spin move to shed the defender when diagnosing a running play. Showed good, not great, strength with the bull rush, on one play throwing the opposing lineman to the ground, although it took so long to do so that the play was already nearly over. It's hard to stress enough just how fast Okafor looks--would have run down a rollout away from him had the running back not put a shoulder into him.

Okafor flushed quarterback Tajh Boyd out of the pocket after absolutely blowing off the line of scrimmage. Not sure if even Brian Orakpo is as fast off the ball as Okafor. He isn't particularly thickly built, but he's far from skinny, with the frame to add weight to get up into the 250-60 range he will eventually play at for Texas. Okafor makes it extremely difficult to run anything towards his side of the field, continually flushing plays away from his side. Okafor also plays the run well, once again using his quickness, but not taking himself out of plays with it, as many fast defensive ends are prone to do (see Freeney, Dwight). This kid is big time, with the only question being his ability to fight through traffic.

In truth, the Longhorns were probably lucky that Okafor's stock as a junior wasn't as high as it eventually rose last spring and into the All-Star circuit -- he would have been a national recruit and it would have been much more difficult to land his services had he dominated throughout his junior season the way he did in the playoffs. As it worked out, the Longhorns got an excellent player with great character and Okafor's commitment made the coaching staff look brilliant for properly evaluating his upside.

Like Calvin Howell receiving relatively little attention until Jamarkus McFarland committed to OU, Okafor likewise took a back seat to Devon Kennard. While that is perhaps even more understandable and fitting than the Howell/McFarland interplay, since Kennard is hardly overrated, Okafor is every bit an elite prospect in his own right. Kennard may be more physically gifted and mature, but Okafor has an uncanny ability to disrupt plays that is truly elite and is quite a consolation price, showing a rare combination of athleticism and effort.

The only consideration holding Okafor back from significant early playing time is the defensive end position he plays. With Henry Melton graduating at the power end position, there isn't a clear replacement for him, while the quick end position has players like Sam Acho and Eddie Jones already entrenched. Okafor will see the playing field as a true freshman and could see action primarily in obvious passing situations where he can pin his ears back and get to the quarterback, a similar role to the one Brian Orakpo played during his redshirt freshman season in 2005.