Share All sharing options for: Bevo's Daily Round Up 3.11.09 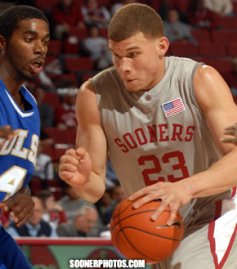 Blake Griffin is on track to wrap up the greatest award in college basketball.

"It's not really a hard decision," said ESPN analyst Jay Bilas, a voter for the Naismith and John R. Wooden awards. "There is no great player that has been as productive as Blake. His productivity is off the charts."

Blake Griffin is the CBSSports.com National Player of the Year.

That's the easiest decision I've made all week.

A&M's leading scorer, Josh Carter, injured his ankle on Saturday and may not play in the Big 12 tournament opener.

No tizzy over tiebreakers in Big 12 basketball.

The implications of the system used for seeding the conference tournament aren't nearly as monumental as in football.

Three of the four teams that tied for fourth in the conference with 9-7 marks must play Wednesday in the first round. The other team in that mix, Kansas State, received a bye into Thursday's quarterfinals.

"Without playing a balanced schedule all the way (in basketball), it probably worked out OK," Texas coach Rick Barnes said Monday during the Big 12 teleconference. "I guess ours is better than what they have in football."

Defensive tackle Swanson Miller added: "Compared to coach Beckman, he’s laaaaaid-back. But I haven’t had him yell at me yet."

Isn't that nice... Mike Gundy wants some one-on-one time with his players.

"I’ll move around a little more during scrimmages and stuff…It allows me to move around some during practice and watch some drills with the younger guys on defense and give me a feel for them."

Big 12 Sports has an interview with Robert Griffin.

Could there be a rematch for Florida and Oklahoma? The Wiz of Odds looks at the possibility.

What is it like to be a college athlete? News OK interviews Baylor guard Henry Dugat.

Bob Stoops is a nice guy. He really is.