A.J. Abrams is on the list of 24 candidates for the Wooden Award presented to the college basketball player of the year. The trophy wil be awarded April 10 at the Los Angeles Athletic Club. Rick Barns will also recieve the Legends of Coaching award the same evening. Congratulations to both. 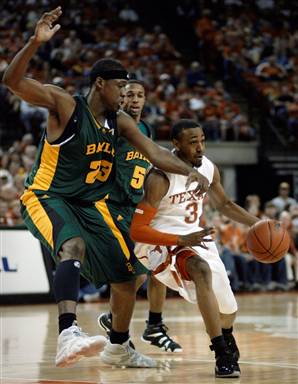 The Horns will be making their 11th straight appearance in the NCAA Basketball Tournament.

Thayer Evans chimes in on the Baylor win over Texas for the NY Times.

The handshake between Baylor Coach Scott Drew and Texas Coach Rick Barnes after their teams played Friday night in the Big 12 tournament semifinals was more than symbolic.

It was practically historic, because the ninth-seeded Bears had beaten fifth-seeded Texas, 76-70 at the Ford Center, to end a 24-game losing streak to the Longhorns.

And so does Dennis Dodds.

At least Mack Brown still has a clean record against the Bears.

NewsOK looks at the fashion choices for Big 12 coaches.

"I’ve never understood why coaches wear ties anyway, but I do it because it’s what I grew up with," Texas men’s coach Rick Barnes said. "And everything that we do we just want to represent the university right."

That said, Barnes — for the first time — ditched the tie on the road a couple times this season.

"Coach (Bob) Knight is always giving me a hard time about wearing a tie," Barnes said. "He said, ‘Someday I’m going to get you out of a tie.’ I just decided this year when I went to Texas Tech I was going to not wear a tie. I’m not saying it’s in honor of him, but that’s what I thought of."

NewsOk's Barry Tramel has a Q&A with Deloss Dodds.

Is the Texas football program the best it’s ever been?

Yes. It’s a mile wide and a mile deep. We’ve got terrific coaches, players at every position and every age. That doesn’t mean you’re going to win the national championship every year, but we’re going to be good every year for a long time. I like where it is. If I didn’t like it, I wouldn’t have done the (Will) Muschamp thing.

Better get those OU-Texas tickets now. The Business of College Football has ticket prices for the so-called cheap seats. And they aren't cheap.

Where are they now... John Mackovic is living in California and he has his own blog.

According to I Am The 12th Man's Beergut, the Aggies got screwed in the NCAA tournament pairings.

I really can't believe this; we're facing the exact same team in the 8/9 game that we faced in the 2008 Tournament. We're the #9 seed in the West, which means we'll face #8 BYU in our first round game in Philadelphia. If we win that game, we get the privelige of facing #1 seed UConn in the second round.

I don't see any other way to look at this except to say that we got screwed.

Texas coach Rick Barnes said earlier this week he’s no fan of the Big 12 Tournament, that he’d rather be spending the time preparing his team for the NCAAs. What are your thoughts on the value of the tournament?

I’ve heard a little chatter about coaches having concern. On the other hand, if we don’t bring teams into the conference tournament, we may have trouble when it comes to the NCAA Tournament. If other conferences are having their tournaments, that could penalize our teams. This is a different environment than when you go on campus. The conference tournaments are a part of basketball culture.

The conference debates leaving annual championships in one host city.

"This is a great place for this event," Texas athletic director DeLoss Dodds said.

Few disagree. But after an era of moving around its prime events — the men’s and women’s basketball tournaments and the football championship game — the conference may be more open to a philosophical change by anchoring the events in host cities.

Former Miami Hurricane Robert Marve is still looking for a school. Texas Tech is on his list.